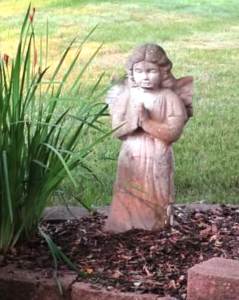 The early morning weather turned out to be a bonus, because yesterday all the weather folks predicted rain at a.m. drive time. That forecast caused me to languish under the covers a little longer after the alarm went off, as I figured I’d be hunkering down in the house instead of strolling in the streets.

I finally made it to the kitchen and peeked out the window – the sun was up and shining brightly!

Well, I put myself into gear and decided to skip breakfast ‘til I returned. I hustled out of the house in record time to get my walk in before the rain eventually arrived. My timing was impeccable – within an hour of my return, it started to come down in buckets.

Things have been slower at work this week, so I’ve sacrificed a few walks and devoted my time to getting some errands done in the car. One such errand was the annual oil change where the techs always laugh at my car’s low mileage. This past year I drove a mere 299 miles since the last oil change in September 2014, so they quipped “you’re really a Sunday driver aren’t you?” “Um … yes, I guess you could say that” is all I could say with a big smile on my face.

On this morning’s walk, I noticed the difference in the sun’s position, just since my last stroll toward the River. Yup, it is rising later and all of a sudden the sun seems to be setting earlier and earlier – those leaps and bounds in the sun’s position really make me sad as it signals our slow journey toward Winter.

As I strolled along, I thought about the significance of this day, and, like many others, recall my own morning fourteen years ago today. It is a sad event we will never forget.

When I returned home after my walk, I put my headphones on to catch up on the news of the day while I made and ate breakfast. As usual, the many memorial services take precedence in the newscast on this date. It was sad to hear the annual roll call of the people who lost their lives on September 11th, especially when that long list was accompanied by the melancholy strains of “Taps” playing in the background. Though we’ve come so far since that day, the service and those sounds can conjure up the images and take us back to September 11, 2001 in a heartbeat.

Time takes away the edge of grief; memory turns back every leaf.

Gone from our lives one so dear; in our hearts forever near.

4 Responses to Teardrops and raindrops …