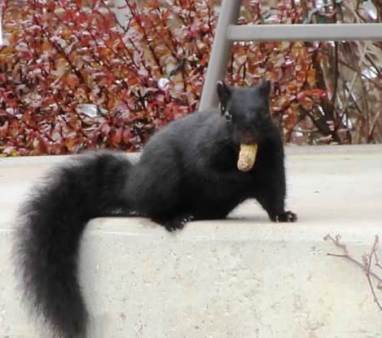 The air temperature was a brutal 16 degrees and snowflakes were flying when I left the house, bundled up to the hilt but happy to be walking again. In fact, I was downright ecstatic to lace up my walking shoes as it had been way too long … nearly two weeks since I last took to the streets.

I didn’t have two braids hanging out beneath a bandana because my hair was twirled up under a warm woolen cap, but, like Willie, I had a song in my heart as well.

It was a fairly short jaunt this morning, as I wanted to ease back into walking and not overdo it, so I went just beyond the border of Lincoln Park and Wyandotte.

Long before I arrived at the footbridge, I saw a flock of geese flying overhead in V-formation. They were quiet, as geese go – I didn’t hear a single honk out of the bunch.  I was curious about them since they kept circling ‘round and ‘round over the water, as if they were seeking a place to splash down and could not.  The nearby grassy area had some snow, but not so much that they could not graze a little, or take a breather at least.  They seemed confused.  I watched as they made one pass, then another …  and still another, until finally they flew off to parts unknown.

Once I arrived at the footbridge, which separates the two cities, just as I suspected, the water was frozen solid. There had some activity in the Ecorse Creek, but not by my feathered friends.  I tried to identify any of the myriad of paw prints that peppered the light coat of snow on the icy surface.  There were many prints, of all different sizes, but no tunnel marks that might have identified a muskrat’s long, dragging tail, so I suppose it was possums or squirrels using the ice to cross from one Creek bank to the other without needing to scramble up to street level to do so.

Speaking of squirrels, I saw many of them as I walked up and down the Boulevard. As usual, they were scurrying to and fro to hit the houses where the homeowners offer them peanuts.  That way they don’t have to get their paws dirty or cold trying to remember exactly which lawn or garden they hid last Fall’s food treasures.

It is Squirrel Appreciation Day so I saluted this little guy with his prized peanut when I passed by.

I returned from my walk with rosy cheeks and a rosy disposition to match and now I am once again even-steven with my car mileage.