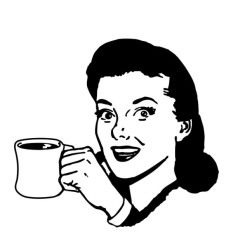 Mother Nature was not kind to the walkers this early morn. So, there I sat, in the kitchen, nursing my first cup of joe and listening to the national news.  Hmmm, so now there’s a new twist in the presidential campaign – Ted Cruz and John Kasich are allies, trying to gang up Donald Trump and steal his delegates … and his thunder.  Of course The Donald will not have any of that.  He promptly reverted back to using his favorite moniker of “Lyin’ Ted Cruz” and even insulting Kasich’s table manners.  It was entirely too much shouting so early in the morning; in fact, I’d have shaken my head, but my headphones might’ve slid off and fallen onto the floor.  I’ll bet Donald Trump had no difficulty standing up for himself in the schoolyard back in the day.

Well, I sure wasn’t going anywhere, despite the last vestiges of fog starting to disappear, because what was left was dreary and drizzly. Ugh.

So, definitely another jolt of java was in order. But, then I remembered I had to “start” a new jar of instant coffee.  That jar, like some other bottles or containers, are a challenge to open sometimes.  For example, every time I try to open a new bottle of Kraft ranch dressing, I have to twist and turn and grimace and yank, just to get the lid unscrewed and off. That dressing has no safety liner and a few times my death grip on the bottle has squeezed too hard and sent a big spurt of fat-free ranch dressing up to the ceiling.  Nice!

So, I eyed that jar of coffee, while thinking of my mom who was plagued with arthritis in her hands in later years; she had considerable difficulty opening jars. I bought her a jar lid popper and a rubbery-type gripper gizmo, but she preferred the tried-and-true method of taking a teaspoon and tapping lightly all around the jar lid, then tapping hard in the middle and presto – it would open.  Well, most of the time anyway.  The rest of the time she would begrudgingly use the “gifts” I bought her or hand that jar of pickles or jam to me.

This particular jar of Nescafé Dark Roast Clasico is no different. It is vacuum-packed and packs a punch – first you struggle with the odd-shaped lid, then once you lift the vacuum seal, a big whoosh of air always comes out.  But, I wanted that second cup of Joe, and, I admit, I was a little impatient.  Foregoing the usual tactics to open the lid, I just grabbed a pair of disposable vinyl gloves and gave a mighty twist.  I got the lid half unscrewed and the pressure inside the bottle sent the lid airborne.  I reached up and tried to catch it, and, in doing so, rammed the top of my hand against the countertop.  Hard.  Very hard.  Yup, I shouted.  I probably scared poor Buddy who was sleeping soundly in the other room, under his blankets, on one foot, head neatly tucked under his wing.  He no doubt thought to himself “well how rude … Linda saw a spider or a centipede and she shouted, as usual, and woke me up!”

Now, I have a huge bruise and my knuckle is all raised up and swollen.

And that, my friends, is the origin of today’s blog post title.

[Image by Kaz from Pixabay]

4 Responses to Twist and shout.