Spring may finally be gettin’ here … now that it’s May. 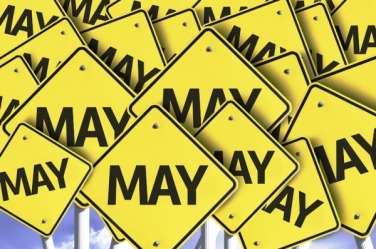 Spring continues to load – slowly, very slowly. Nearly all the trees are out, but there is a cold and damp chill in the air in the early a.m.

I counted on a long walk this morning, so I set my alarm clock to go off very early, but, when I heard that shrill alarm, I decided to snuggle back down under the covers a little longer. My one arm parted those covers and reached over and grabbed for the radio headphones, then I settled in to listen to the news of the day and weather report before I got myself into gear.

The weatherman said “drizzling and fog at Metro Airport” … what??? A beautiful morning was predicted for today!  Disgusted, and somewhat disgruntled, I ripped off the radio headphones, re-set the alarm clock, grumbled and mumbled a few choice words, then punched my pillow – partly to get set for another snooze – partly because I saw another walk succumbing to the weather.

When the alarm went off some 90 minutes later, I clapped the radio headphones onto my ears and flipped the covers back. The news anchors were chattering about the chilly, but sunny, morning and the weatherman confirmed that the sun was shining brightly – even at Metro Airport.

So, you are now saying that the drizzle fizzled?

As I headed to the kitchen, I remembered one of my mom’s favorite sayings “believe half of what you hear and all of what you see” … well, that was the truth this morning, and, it’s not the first time I listened first, looked outside later.

So hopefully I learned my lesson, right?

Well, I cheated myself out of a long walk on a beautiful day, but I did get a chance to pound the pavement for an abbreviated trek anyway. Today’s excursion didn’t yield any mischief-making geese at the footbridge, although the ducks were making a ruckus about something as they skidded down onto the surface of the water after descending from the sky.  They sure were a noisy bunch and I wanted to tell them I was in a cantankerous mood as well, but resisted that urge and just kept walking (and muttering to myself all the way).

On the return trip, I spotted a large husky running around the sprawling grounds of a church. At first, I thought he was on the loose, then noticed he was on an extra-long leash, and, yes … his owner was following along behind him.  She was wearing flip-flops, shorts and a tank top.  I was in a heavy coat, gloves and a hat.  I listened to the weatherman – he said in the 40s … we greeted one another and remarked on the beautiful morning.  I asked her if she was cold and I said I listened to the weatherman who said it was 40 something.  She said “nope, I’m not cold, and I just looked outside at the sun and wore this!”

Clearly, her mom preached the same words of wisdom … only that girl followed Mom’s advice.

2 Responses to Spring may finally be gettin’ here … now that it’s May.