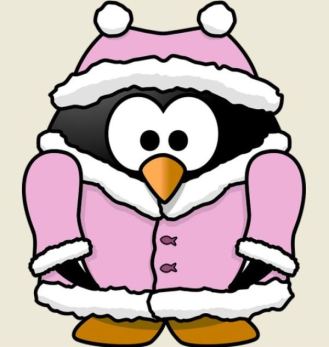 We’re in the deep freeze again.

It’s hard to believe only two weeks ago we were breaking out the shorts and enjoying that Spring-like weather, and now it is back to layering up bigtime and bone-chilling temps.

Talk about being in the icebox … this morning when I left for my walk, it was only 22 degrees and the wind chill made it feel like 11. Brrrrrr.  I donned my down coat, double gloves, and, once on the road, I was mighty glad I had been smart and added the hooded scarf, as that wind sure was fierce.

As I neared the borderline of Lincoln Park and Wyandotte, I saw that same terrier had crawled through the hole in the privacy fence and was running around on the sidewalk yapping and snapping at a man. When the dog started nipping at his heels, the man broke into a run, but kept turning around, checking out this canine who was still dogging him.  I quickly crossed the street, having tangled with this terrible terrier myself once already.  From a safe distance, I called over to the man, a fellow walker, whom I often encounter in my morning walks, that I thought I was the only one this dog didn’t like.  He responded “he tried to take a bite out of my leg one time!”

While crossing the footbridge, I glanced at the geese that had gathered on the homeowner’s large property for the third day in a row. What’s up with that?  Oh, a few were in the ice-cold water, but most of them were trespassing, either strutting around on the back lawn, or standing on one foot.  The flamingo-like stance was something new for me – those geese were lined up like soldiers with one wide, webbed foot neatly tucked beneath their belly feathers, while balancing on one leg.  I did a double take at first, then concluded their feet were freezing and they were warming them up … one at a time.

Just like yesterday, I found myself stepping around branches and tree debris up and down the Boulevard. Emmons is full of large trees, so that was no surprise to see so many small limbs on the ground, as well as large chunks of bare wood, from trees that had snapped during Wednesday’s ferocious winds.

Luckily our neighborhood remained unscathed. Some debris was on the lawn, but there were no shingles missing and nothing amiss – we sure were lucky.  We’ve only had a few really frigid days all Winter, so how unfortunate they had to be at this time when so many people are still dealing with the power outage.  I feel for them.  We lost our power one Winter years ago, and, we hunkered down in the house and stuck it out, but it was pretty brutal.  I recall we went to bed dressed like Eskimos , wearing woolens and parkas , huddled under a pile of blankets and a down comforter … and still being very cold.  The worst was keeping your hands and feet warm.  No happy feet during those days … just ice-cold tootsies.

During my walk, that bright sunshine tempered the cold temps somewhat, making it worth the added aggravation of piling on extra clothes and fighting the biting cold, to get some steps added toward my total.

I got about three miles walked this morning, before I arrived home ravenous and with ruddy cheeks.

[Image by Moini at openclipart.org]