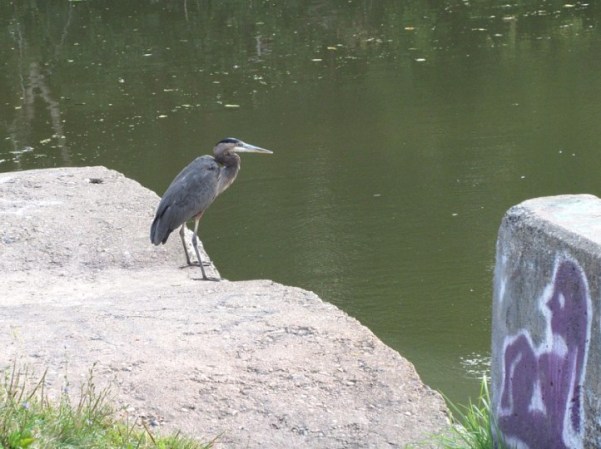 I wonder just how many readers of my blog would recognize this song title from the 60s?   (Or, … would want to admit they remember this tune by the family group the Cowsills?)

This particular song title was on my mind as I got home from walking and started peeling off all my wet clothing.

Actually, my walk started out sunny and dry.

As soon as I hit the streets, it was evident that everyone was back to the old grind again, having enjoyed that last getaway weekend of Summer.  Now, there will be no more long weekends until Thanksgiving, unless you’re lucky enough to be off for Columbus Day.   Yup, school is in session once again, and with that event comes the a.m. hustle and bustle.  There were more vehicles on the road, a group of schoolkids trudging along Fort Street and a few yellow busses rolling along, with plumes of diesel fumes still filling the air, long after they turned the corner.

I headed down to Council Point Park and the usual crowd was already in motion on the perimeter path.  There was a new addition to the morning mix, however, this heron that is pictured above.  The cement precipice that juts out over a storm drain at the Ecorse Creek must be the new hangout for herons, because it is on this ledge that I keep seeing the green heron.

When I first encountered this guy, he was standing there, still as a statue, either contemplating life or studying the graffiti on the wall.

After I took the above picture of him from the perimeter path, he didn’t flinch in my presence, so I stepped down closer toward him, but then he promptly turned and marched away on those long, stilt-like legs, as he sought to put some distance between us, yet remain at his lookout point. 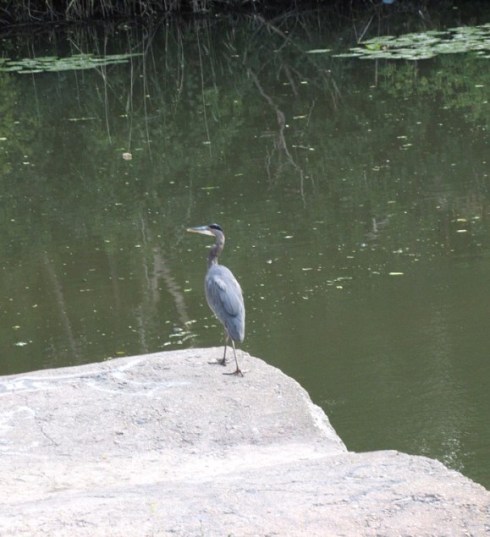 Well, of course he piqued my interest, and I was greedy to get a close-up shot of him, because, even by zooming in on him, I knew I could do better.  So, I inched my way a little closer and he stood there motionless as he posed for me.

But, though I made no sudden moves, suddenly he was spooked and took flight, propelling himself off the cement ledge with giant wings.  I tried to capture an image of his departure, but it was just a blur, as this heron was too quick for me as he hightailed it to parts unknown.

A few years ago,  I saw a big heron at Council Point Park.  He was perched in a very tall, dead tree.  His gray plumage blended right into the tree, which had lost its bark and was quite weathered looking.  It was the first sighting of a heron for me, and he held that same pose as I went another whole trip around the perimeter path, not moving a muscle, nor batting an eyelash.   It was a perfect photo opportunity.

This morning, Mr. Sun, just like the heron, was also quite conflicted about whether to stay put or go away.  Though it was sunny when I departed on my walk, once I arrived at Council Point Park, Ol’ Man Sol kept slipping in and out of the clouds.  I walked three loops, and waivered on whether to do a fourth, then decided to head for home, another 3/4s of a mile away.  As I walked up Pagel Avenue, I noticed the sky had suddenly become a hue that resembled an eggplant with blackish-gray streaks.  I had no worries about rain or storms, since no rain was expected until this afternoon.  But, I was a block from home, and the sky suddenly opened up with massive raindrops which plopped down on me.  I stretched my sweatshirt over my fanny pack to protect the camera as there was no time to wrap it with the Ziploc bags I usually carry just in case of sudden bad weather.  Then, I broke into a sprint to get home.

By the time I reached my driveway, it was a torrential downpour.

By the time I got undressed, grumbling all the while about Mother’s Nature’s bad timing as I peeled off each article of wet clothing, the pounding rain ceased and I saw a faint ray of sun on the wall.