Many geese a honkin’ …

What a gorgeous day!  I could not wait to get out and enjoy the beautiful morning … not too hot, not too cold, (well, okay … maybe a tad chilly and breezy) and the sun was shining brightly.

I headed down to Council Point Park and joined a slew of other walkers and runners, also eager to enjoy their walk in this little nature nook.

“Nature nook” was an apt description this morning.

The squirrels were out foraging for food as I happened along, and I had that usual warm feeling when they come running up to me.  I’m such a softie, especially with my favorite little squirrel that plunks himself onto the blue bench and then scrambles over to see me as I approach him.  I stopped and took out the Ziploc bag and put a peanut near my foot and scattered another four or five nearby where he could see them.  His face lit up and he contently munched on a peanut, taking his time, secure in the fact that the rest of the stash was his for the taking.

But … not so fast my little pal, because a Blue Jay was screeching loudly, from a nearby tree and flew down onto the perimeter path, clearly ready to cry foul about why he was excluded in these treats, which he no doubt was eying from his high perch.  I reached back into the bag and quickly tossed a few peanuts in the direction of the jay, hoping to thwart an argument over what each critter though was rightfully theirs.  The jay quickly gobbled up a peanut and took another “to go” so no conflicts arose.

Next up was the gopher.  I was busy chatting with another walker, and there he was, running just as fast as his roly-poly body could take him with a rosy-looking apple clenched between his teeth.  He saw us and ran into the bush and vanished.  Unlike last time, when he saw me and quickly popped into his burrow, his hidey-hole was not nearby, so he had to have a Plan “B”.

On my second trip around the entire perimeter path, I passed a gaggle of Canada Geese who were grazing in the nearby baseball diamond.  One goose stood apart from the rest and was honking loudly.  For every honk uttered by this goose, across the Park and around the bend at the nearby Ecorse Creek came a response.  In the still of the morning, in a wooded area secluded from traffic and only the fog horns or the occasional train to interrupt the peaceful morning, the back-and-forth honking was quite intense, and really piqued my interest.  The entire time I was walking in that area, there was this little tête-à-tête going on between Goose #1 and Goose #2.  It was as if they had their own secret language between them, yet, neither made a move to join the other.  As I neared the cement landing, the honking got louder, so I then wondered if the goose in the Creek was injured, so I went to investigate.  Slowly, I inched down the steep grassy slope to the cement landing to have a look.  I discovered a pair of geese who were gliding compatibly down the middle of the creek, one was honking its head off and the other was silent.  The honking continued on the other side, then suddenly it stopped and the signal caller must have given the sign and the whole flock took to the air.  The pair from the Creek glanced up, saw their friends and took off as well bringing up the rear with another straggler, as seen above.  I was shooting blindly as the sun was in my eyes, so I was surprised I even got the pictures featured today. 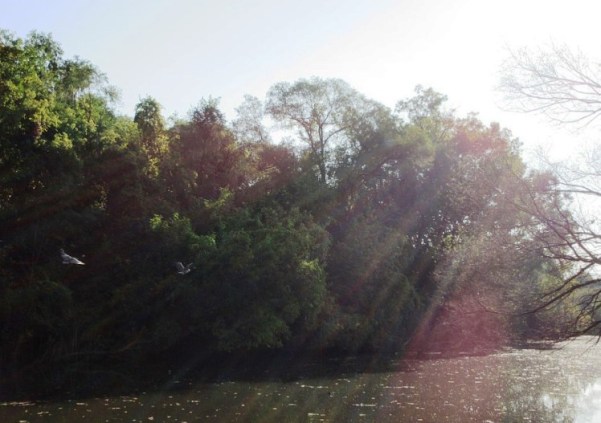 It was momentary mayhem as the geese exited the Park, and with the incessant honking by the pair of geese finally stilled, and mercifully, the jay’s screeching ceased, the Park was restored to the peace and solitude on a Saturday morning that is the norm.

2 Responses to Many geese a honkin’ …