The pathway was perilous, so I went to Plan “B”. 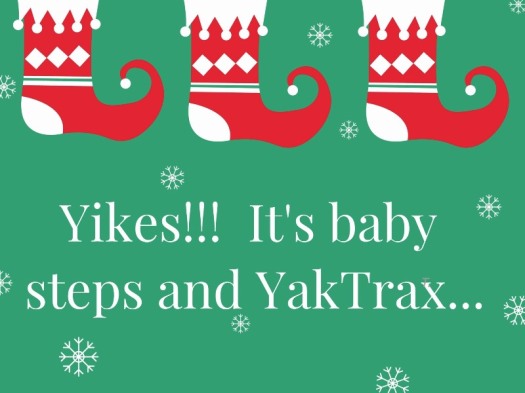 Correction:  when snow falls, EVERYONE takes notice!  Mother Nature shook up her extra-large snow globe last week in some of the southern states – unbelievably, Texas and Alabama got slammed with a lot of snow.  Today it is our turn here in Southeast Michigan.

There is nothing more beautiful than the first snow of the season, especially if you’re inside looking out the window at a scene that resembles a Currier and Ives print.  Of course, that idyllic setting loses some of its charm once you get out and have to drive in it, or shovel it.  Grrr!

Right now, as I’m writing this blog post, the snow is softly falling, tiny crystalline pellets twinkling down, lighting up the night, and, by tomorrow morning, three to four inches of fresh snow will have been deposited.

But, we also had some snow early Saturday morning, which was not so nice.  That’s because it was “nuisance snow” – not enough to sweep or shovel,  nor was it “packing snow” to make snowballs or snowmen, nor was it soft and fluffy enough to make snow angels.

I stepped out the door early Saturday morning and knew right away I’d be skipping my trek to Council Point Park since the wet flurries were flying in earnest, though they weren’t really sticking.

Sunday morning was a whole different story.  Part of Saturday’s flurries must’ve contained some freezing rain or ice pellets, because all the cement was ice covered and slick as glass.  No wonder there were so many “fender benders” on the traffic report.  So, who knows what’s in store for the rest of December, and, with me still desiring to get 1,000 miles walked this year, I shut the door and headed downstairs to dig out the YakTrax Pro Ice Grips and to implement Plan “B” to get some steps done.

If you’ve never seen YakTrax, they are lightweight, spring-like devices you strap right onto each shoe or boot.  YakTrax will help you gain traction while walking, or even running.  I strapped them on and headed outside.  There was a little snow to be swept, and then, taking a series of baby steps, I crossed the street and headed to Memorial Park.  This is a park that encompasses three city blocks, and, the only cement is the pathway that winds through the memorial pavilion area and the Bandshell entertainment area.  The rest of this park is grassy, just perfect for walking in the snow.  Sure it lacks the ambiance of Council Point Park, but, at this venue there is no chance of wiping out on the black ice that often is present on the perimeter path.

So, Plan “B” racked up three miles yesterday, and another two miles this morning just from tromping around the entire park several times.  I probably could have removed the grippers once I landed in the safe haven of the grassy portion, where grass blades were merely glazed with frozen crystals, but I left them on to risk taking a tumble.

Thankfully, salting and plowing will make the roads safe again, just as shoveling the driveway and sidewalks likely will remove all traces of that pesky ice from homeowners’ properties.  By mid-week, I’ll plot my next trek, so those steps will help get me some additional miles to add to my final tally.

2 Responses to The pathway was perilous, so I went to Plan “B”.