… for a couple of days anyway.  It’s not like the frost is on the pumpkin, or anything quite that dramatic, but the pumpkin goodies are on the store shelves and Starbucks is offering up its pumpkin latte, which tells you there’s a hint of Autumn in the air.  The porch pots, brimming with jewel-colored chrysanthemums, were on display at Meijer when I was there earlier in the week.  To me, when mums kick the flowering annuals to the curb, it always signifies that Autumn is near.

College football starts today, thus the annual rivalry between Michigan’s foremost teams begins anew.  While strolling through the ‘hood, I passed ornamental cement geese wearing hoodies emblazoned with “U of M” or “MSU” and collegiate garden flags were flapping in the breeze.

Thursday morning it was almost twenty degrees cooler and much less humid than twenty-four hours before.  It was actually chilly and very overcast.  I almost declared it officially “sweater weather” but this delightful respite once again will not stick around long – heat and humidity return Saturday morning as Summer rages on.

As I walked to Council Point Park these last two days, I couldn’t help noticing the many leaves littering the lawns and sidewalks, all courtesy of that nearly month-long drought we had in July.  The tall oaks are spilling acorns onto the sidewalks and the squirrels are industrious, scrambling to get them and stuffing their cheeks until they look like they have the mumps.  It is also amusing to see them clutching onto pinecones and nibbling delicately at those wood-like “petals” … perhaps the chillier air has put them into hunting-and-gathering mode, as they scurry to and fro across my path, foraging for food while the goin’ is good.  Those squirrels remember all too well our wicked Winter of 2017-2018, when Mother Nature cranked up the snow machine on December 9th and she was having so much fun, she forgot to press the “stop” button until April!

I checked out the horse chestnut tree, but it looks the same with its pendulous, fruit-like chestnuts on nearly every branch.  I am eager to see what they look like when they ripen.

When I returned to Council Point Park yesterday, after an absence of only three days, my favorite squirrel, Parker, came racing over to see me.  Yup, I wanted to scoop him up and say I was sorry I’d not been by due to the heat.  He pranced and danced around my feet, then stood on his haunches, eagerly awaiting his treat, so I lavished peanuts on him.  He grabbed two in his front teeth and headed across the parking lot to the spot he always goes to hide them.  All I saw next was a furry tail sticking straight up in the air.

I stepped onto the walking trail, then chatted with a few other walkers about the weather, always a common topic, then doled out peanuts along the way to my other furry pals.  On the second loop, I put away the camera as not much happens on that side.  But, I was premature in tucking it away.  There was a black squirrel on the path ahead of me, but I didn’t pay much attention to it.  As I’ve mentioned countless times, the black squirrels in the neighborhood, and at the Park, are notorious for either rebuffing your efforts to give them peanuts, or, they bolt as soon as they see the whites of your eyes.

However, as I neared this cute little creature, he came over to see me on his own accord.

No coaxing, or cajoling, nor tossing out peanuts.

I wanted to feel his forehead.

Timid at first, he hung out around the tips of my shoes, like we were best buds or longstanding pals, like Parker and me.  So, where was that skittish personality I’ve encountered with all the black squirrels in the past?  It sure wasn’t evident. 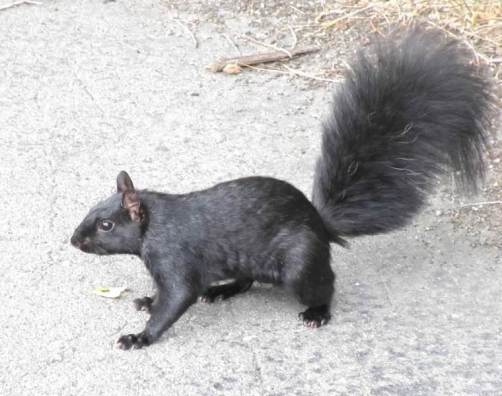 I bent down and tossed out a few peanuts onto the path. 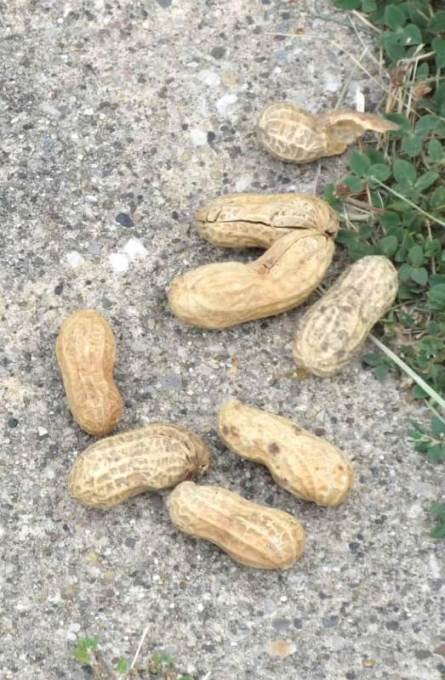 The Park was full of walkers yesterday and today, all of us enjoying the cool and refreshing air after the relentless heat and humidity we’ve endured all Summer.  They saw me stopped on the trail and moseyed over to see what I was doing.

Well, what I was doing was sweet talkin’ this little guy and bending down closer to his level to give him more peanuts.  After an initial reluctance, where once he dashed into the bushes, he soon ventured out again and stayed put to enjoy his treat.  Slowly, I retrieved the camera so I wouldn’t spook him and could get his picture.  More walkers marveled at this little black squirrel sitting there so contentedly, especially Mike who feeds the squirrels and he said “I’ve never seen one of those  black squirrels take peanuts, or even come up close to any of  us.”

I stayed there with him, clicking off a lot of shots, but it was quite gray yesterday and the trees and bushes shaded the pathway.  In fact, I had a few shots of him where he looked slightly demonic with bright-red eyes.  I wonder if he is older, judging from those pesky white hairs intermingled with the jet-black fur in his tail.

I stayed near him while the others moved on, but more walkers passed by, and also marveled at this little guy, posing so nicely and enjoying the companionship of his benefactor.  So, will this little guy be competition for Parker?  I finally left when he scurried off to bury some nuts – maybe he thought I wasn’t passing this way again?

This morning I doubled up on my peanut offerings before leaving the house.  Parker never disappoints and was quick to come bounding over as soon as I walked into the parking lot, but Midnight, the moniker I gave to my newest little buddy, was a no show today.  There will be many more morning walks at the Park, and hopefully more photo ops of him.

Today I passed the 700-miles-walked goal I set for myself for August 31st.  It was touch and go for a while with all this rain, but I still have another 350 miles to go for my year-end goal.  I will have to really push myself in September and early October … sun up is noticeably later every day and after mid-October there is the threat of black ice on those frosty mornings.  It really slickens up on the asphalt path, so sometimes I just stay in the neighborhood to maximize my miles as the sidewalk is more porous and not slick.

Tomorrow, as I push toward this goal, I’ll christen my new walking shoes … 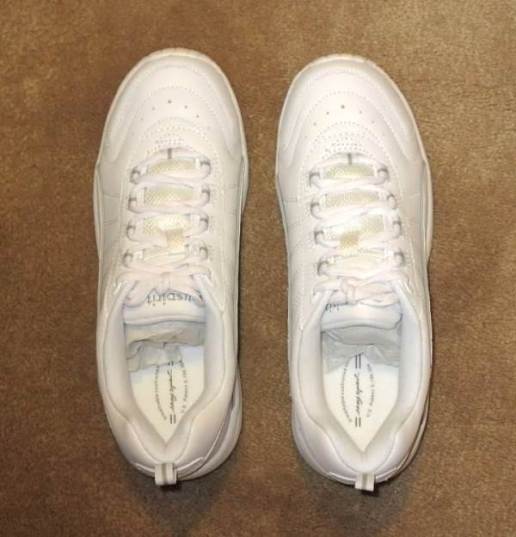 … since my current ones were starting to crack just a little.  I’m sure they have at least 1,000 miles or more on them and I’ll keep them for a spare pair.

I took the new shoes out of the box this morning to take the picture.  They sure looked heavy and clunky looking, and seeing them made me recall getting new back-to-school shoes every year.  After a Summer of running around in flip flops or sneakers, my mom would say “you’d better wear your new school shoes around the house and get used to them, or you’ll get blisters when you walk to school!”  So, I’d tromp around the house in my Mary Janes, and, when I got older, my penny loafers.  It didn’t seem to help – I’d always get blisters on my heels anyway.

I’ll venture out tomorrow in these new shoes, onward and upward … no barefoot in the Park for this gal.

This is my first blog and I enjoy writing each and every post immensely. I started a walking regimen in 2011 and decided to create a blog as a means of memorializing the people, places and things I see on my daily walks. I have always enjoyed people watching, and so my blog is peppered with folks I meet, or reflections of characters I have known through the years. Often something piques my interest, or evokes a pleasant memory from my memory bank, so this becomes a “slice o’ life” blog post that day. I respect and appreciate nature and my interaction with Mother Nature’s gifts is also a common theme. Sometimes the most-ordinary items become fodder for points to ponder over and touch upon. My career has been in the legal field and I have been a legal secretary for four decades, primarily working in downtown Detroit, and now working from my home. I graduated from Wayne State University with a degree in print journalism in 1978, though I’ve never worked in that field. I like to think this blog is the writer in me finally emerging!! Walking and writing have met and shaken hands and the creative juices are flowing once again in Walkin’, Writin’, Wit & Whimsy – hope you think so too. - Linda Schaub
View all posts by Linda Schaub →
This entry was posted in Uncategorized and tagged Black Squirrels, Fall, nature, Squirrels, Summer, walk, walking. Bookmark the permalink.

67 Responses to It’s been feeling Fallish …