Posted on November 4, 2018 by lindasschaub

Wow, the weatherman aced it for the weekend weather.  I sure am glad I flip-flopped yesterday’s agenda and made it today’s instead, because the morning started out calm and a little sunny, then everything turned ugly and gray and the winds picked up.  Those winds were gusting mightily so I decided to just forego raking leaves – they were all blowing my way anyway.

I sure did enjoy that extra hour today and I’ve not changed the clocks yet, because I kind of like glancing at them and knowing it is really an hour earlier.  Can we do this every Sunday?

This post will be Part II, a continuation of yesterday’s two treks.  Today is exclusively Elizabeth Park, where I went after a quick morning meander down at Council Point Park to check on and feed my furry peanut pals.

Part I is here

Whew – I think I just about missed peak leaf-peepin’ time!

I sure am glad I went to Elizabeth Park yesterday because one look at the trees told me that today’s predicted high winds would likely strip every tree of its leaves.  So, it was the swan song for most of the Fall foliage at Elizabeth Park.

You may recall I mentioned yesterday that I took way too many pictures because when I arrived there, the sun suddenly decided to dip behind the clouds and there it stayed for the better part of an hour.  I waited a few minutes for the sun to show its face again, then decided to just go ahead and take pictures, sun or no sun.

This trek followed three days of rain and I’ve been here before after rain pools in low-lying areas and it was no exception this time.  There were deep pools of water everywhere.  A sick Sycamore tree was furiously dropping leaves and they were either submerged or floating in this pool of water. 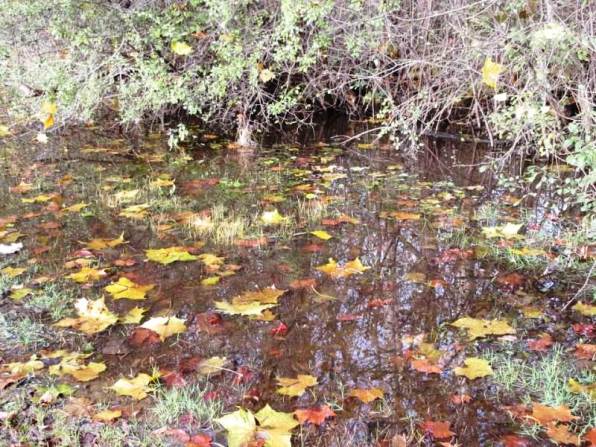 I walked the big loop that encircles Elizabeth Park, which is actually a man-made island, then I went to the boardwalk that runs parallel to the Detroit River.  I was just enamored with a stand of golden-yellow Lombardy Poplar trees which I saw in the distance and took many pictures of them.  This is one of them.

The wind started to kick up a bit and leaves began fluttering down all around me.  Once again I tried to capture their descent, but then I figured I’d better just hustle along faster to get closer to those Poplars before all the leaves were stripped bare.  I told myself “one last picture” and was taking that shot when I saw a dark blob in my peripheral vision.  I looked over to see a heron whizzing by me.  I tried to focus on him on the fly and I just clicked away hoping for the best.

Considering I was a little slow, the photo didn’t turn out too badly.  Had the heron announced his presence like the one at Council Point Park does with a screechy noise that could wake the dead, I would have been more in tune with its presence.

Where were the other waterfowl?

The waterfowl were not as plentiful as usual.  Sometimes there are ducks galore – yesterday not so much.  There were some mallards in the water, but too far away from me, and when the wind kicked up and the water was rippling, I knew my shots would be iffy at a distance.  I saw these Pekin ducks and Hybrid Mallards snoozing together along the shore – they were in dreamland as they didn’t even stir as I walked by.  Even the lookout drake was shutting his eyes.

Though I did get my goose fix …

I got a goose fix when a flock of Canada geese came in for a landing and skidded onto the surface of the water in a big splash – I mean a BIG splash and I’m glad I wasn’t too close to them, or I’d have gotten soaking wet.  They regrouped and started paddling together, dipping and diving and preening along the way.  Aren’t they beautiful with their synchronized swimming? 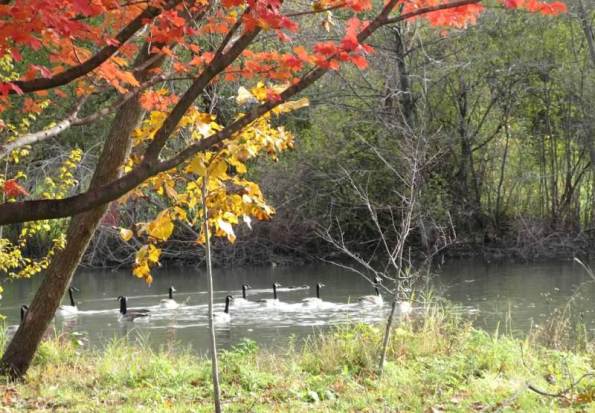 Then I spotted this trio of geese, looking so regal with their black heads and distinctive markings and plumage.   I watched them for a while, noting that one of the geese held up its right leg the entire time.  I hope it wasn’t injured, because while the other geese were grazing – this one stood there like a statue.  I enjoyed watching them – one goose was grazing with its body plopped right on the ground.

I saw the trio silently looking out onto the water, perhaps searching for their friends?  I wanted to tell them their friends were back at the first footbridge.

I scanned the sky for any raptors circling overhead but all I saw were seagulls, and very few at that.  Not even any Cormorants taking an icy cold dip in the water either.

Then, “just like that”  Mother Nature decided to turn on the Park’s light switch –  the sun came out and shone brilliantly.  It turned out to be a good shadow day as well, as you see a shadow picture of me climbing up the steps of Elizabeth Park’s largest of the three footbridges.  I think I look as chubby as Parker and his pals in this picture.  It was chilly so I was layered up and had a puffy coat on as well. 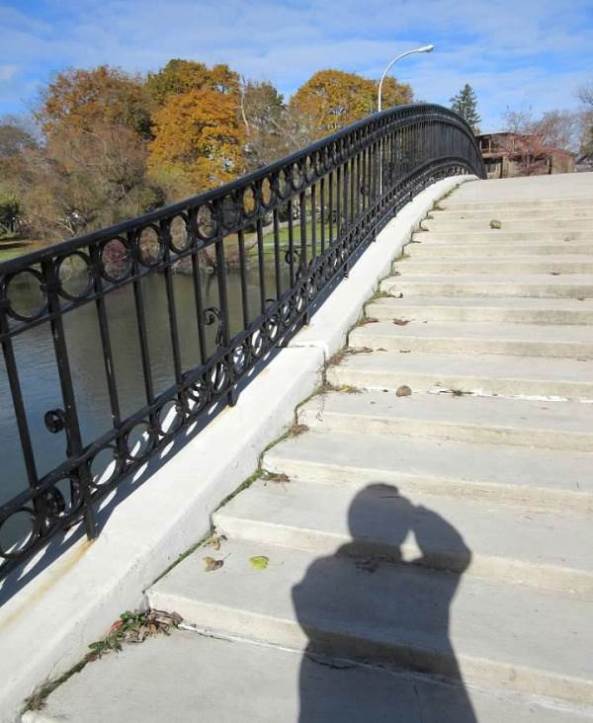 As I crossed the Elizabeth Drive Bridge, where the cars must enter and exit this Park, I stopped to take a picture of Old Glory flapping in the breeze. 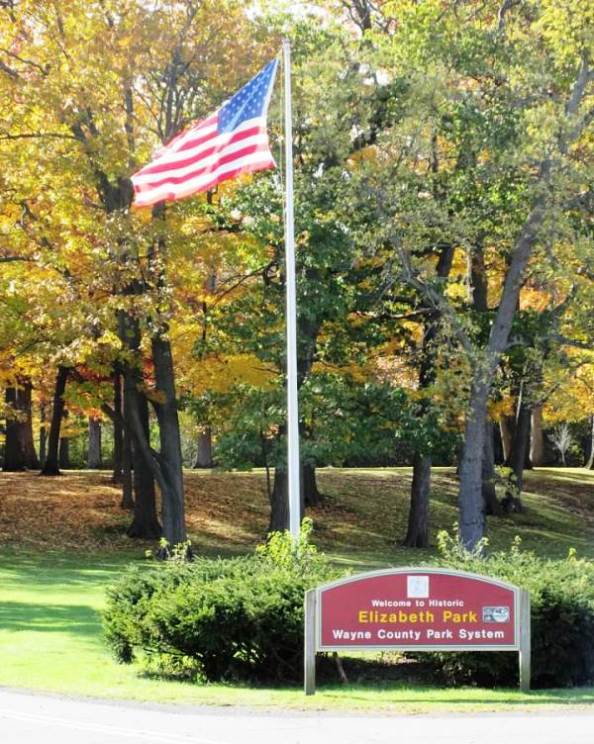 When I stopped in my tracks, apparently I ticked off this squirrel as I strayed into his personal space and too close to “his tree” as you see in this picture.  From his high perch he looked down at me, while wearing a very disgruntled look and then he chattered at me angrily.  I tried not to take it personally. 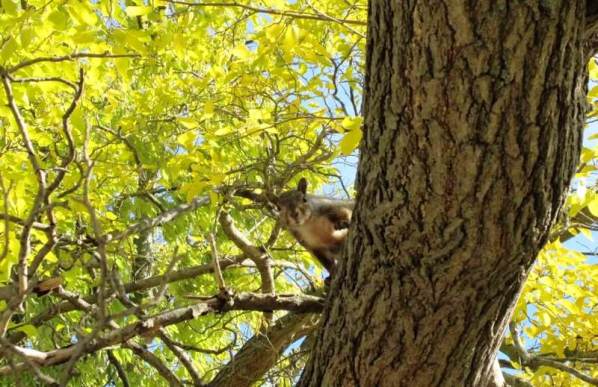 Unfortunately I had given away all my peanuts earlier at Council Point Park so I had nothing to pacify this little soul.  He posed nicely in the tree though, long enough for me to get these shots, then he shot up to the top, until I had gone on my way and it was safe to come down again.

Maybe he would have liked to chomp on these pretty berries. 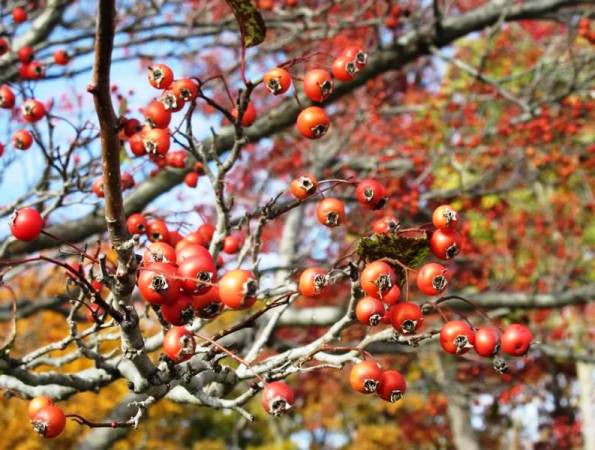 As I mentioned in yesterday’s post, the appearance of Ol’ Sol prompted me to do a walk around once again to recapture the images of all those stunning trees with just a hint of sun in the background.

My last glimpse of Elizabeth Park was when I reached my car after trekking 5 ¼ miles in and around this venue – a flock of geese was grazing under a colorful tree, with one of the smaller footbridges in the background.

Instead of making you scroll down looking at leaf pictures, here is a slideshow of my favorite foliage photos from Elizabeth Park.

I traveled the perimeter road that encircles Elizabeth Park twice and I went over the bridge, and along the boardwalk as well.  After that long trek, I sure am glad I decided to do my leaf peepin’ today because after today’s blustery day and a gusty storm predicted for Election Day /Tuesday, these trees would likely be stripped of their leaves.

This is my first blog and I enjoy writing each and every post immensely. I started a walking regimen in 2011 and decided to create a blog as a means of memorializing the people, places and things I see on my daily walks. I have always enjoyed people watching, and so my blog is peppered with folks I meet, or reflections of characters I have known through the years. Often something piques my interest, or evokes a pleasant memory from my memory bank, so this becomes a “slice o’ life” blog post that day. I respect and appreciate nature and my interaction with Mother Nature’s gifts is also a common theme. Sometimes the most-ordinary items become fodder for points to ponder over and touch upon. My career has been in the legal field and I have been a legal secretary for four decades, primarily working in downtown Detroit, and now working from my home. I graduated from Wayne State University with a degree in print journalism in 1978, though I’ve never worked in that field. I like to think this blog is the writer in me finally emerging!! Walking and writing have met and shaken hands and the creative juices are flowing once again in Walkin’, Writin’, Wit & Whimsy – hope you think so too. - Linda Schaub
View all posts by lindasschaub →
This entry was posted in Uncategorized and tagged Autumn, Fall, Leaves, nature, walk, walking. Bookmark the permalink.