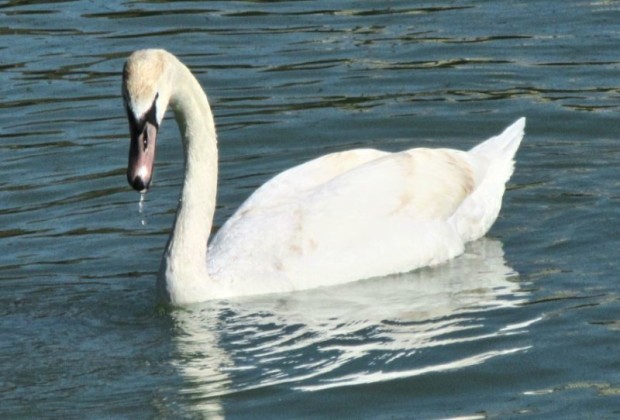 The month of March leaves you scratchin’ your head sometimes.  It makes its debut, either lamb-like or lion-like, and it’s anyone’s guess how March will exit – sometimes it doesn’t exit quickly enough!   Here in Southeast Michigan, it could be wild or mild.   If it is not the March winds a’blowin’, it is still icy and dicey, or there is snow and a few times I remember people wearing flip flops. Yesterday, I was walking home from Council Point Park and the sky started to darken and my thoughts turned to “oh-oh, what’s next?”  In the space of a few minutes, rain splattered onto my coat, followed by icy pellets that pinged off my sleeve.  I picked up the pace a little and by the time I turned the key in the lock, there were dime-sized snowflakes twinkling down.  March madness is not just happening on the basketball courts.

The weatherman promised us two sunny days so I was glad for that.  I had planned on trying at least one new park this weekend.  But a rainy Wednesday and Thursday, coupled with Friday’s sleety/snowy blip, made me rethink that idea and just head to a tried-and-true venue where I knew a paved path would be a safer bet.  (Or so I thought.)

I decided to head out to Lake Erie Metropark, a good run for the car, and a long, paved walking path for me.  But the pathway had huge patches of glaze ice that formed from pools of water that had frozen over the cement, just like Heritage Park last Sunday.  The rain cannot saturate into the frozen ground and it has nowhere to go.  Likewise, the Cherry Island Trail was a little icy in spots and the grass had a spongy feel to it, what wasn’t frozen.  I managed to get five miles walked there anyway and will write about that trek in a separate post.

When I left the house it was just 23 degrees F (-5 C) but when I arrived at Dingell Park, almost four hours later, it was a balmy 40 degrees F (4 C).  A few fishermen lined the boardwalk, poles in hand and looking hopeful.  Several boaters cruised the channel between Mud Island and the shoreline.

I was surprised to see all the ice floes were gone.  It was just three weeks ago that the Detroit River at this venue was filled with chunks of ice which floated along, carrying seagulls and mallards which had hopped aboard for a free ride.

The reason I stopped at this park was I hoped to catch one last glimpse of the eagles who live on the Island before the trees leafed out, but the trees were bare, with no eagles. 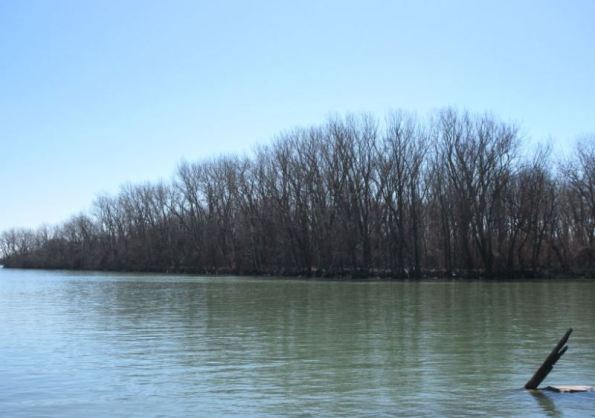 Not a single seagull showed up, likely because no one was tossing out any treats.  There are always waterfowl in the cove and pavilion area, but surprisingly, there was only a pair each of swans and geese, plus one duck, a Canvasback, which was all alone. 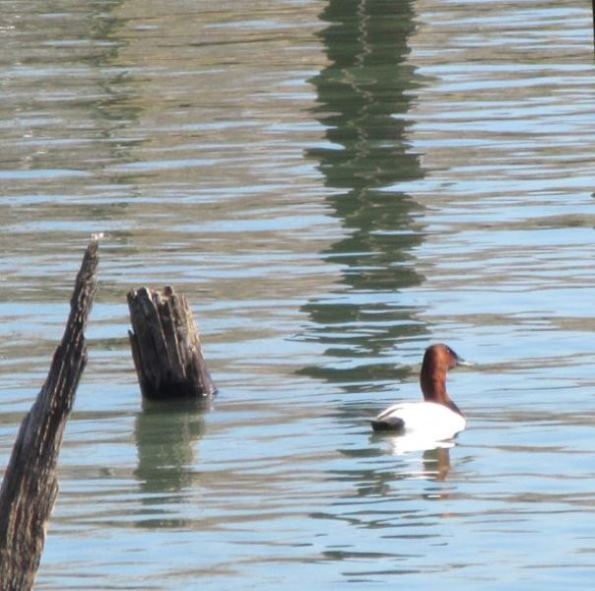 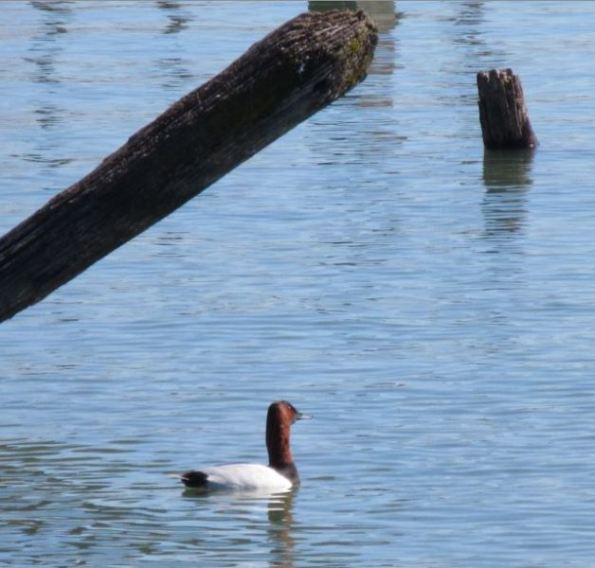 Speaking of ducks, let’s talk about ducking, shall we?

Though the ducks were scarce, a whole lotta ducking was going on beneath the surface of the water.  The shad must have been running, as the geese and swans in the alcove spent more time with their feathery behinds in the air, than sitting squarely on the water’s surface.  I could have filled an entire post with such photos. 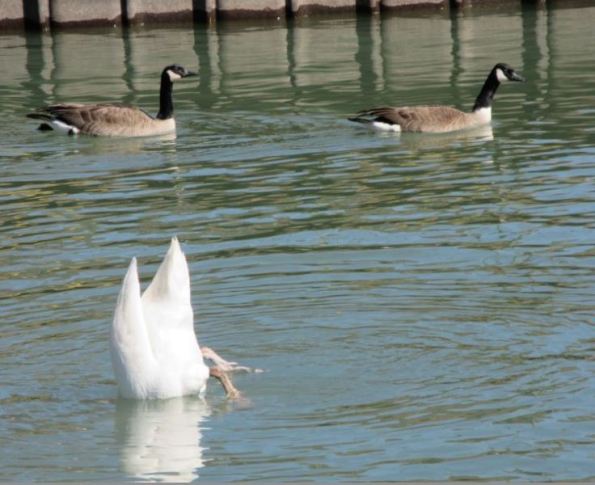 Because the geese were either intensely gazing at one another, or diving for shad, they didn’t provide many Kodak moments today. 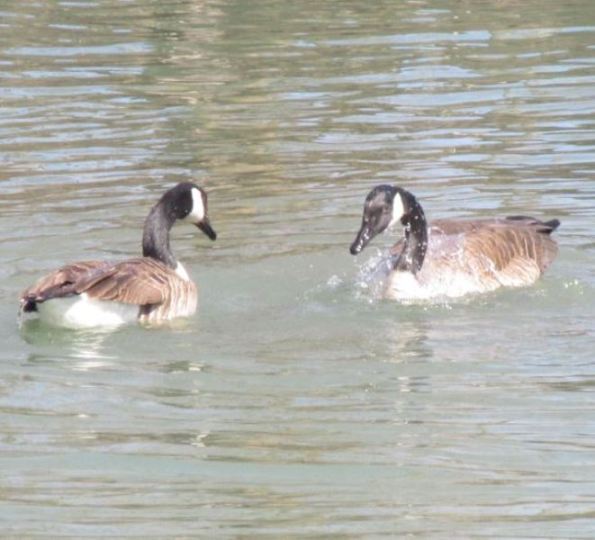 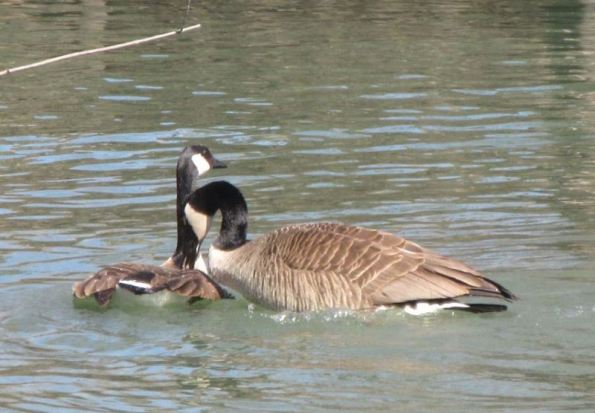 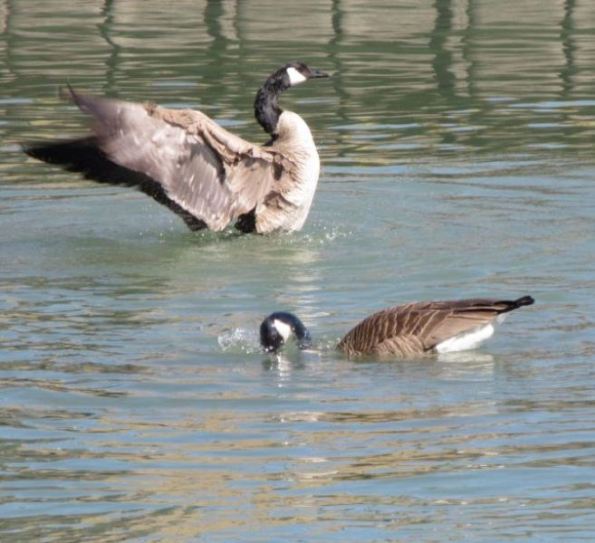 Thus, the swans became the stars of the show – for me anyway.  I saw a few swans earlier at Lake Erie Metropark, but none were close up.  These two beauties graced me with their presence as they glided along the Detroit River.

I’m not sure which profile shot was more flattering of these lovely creatures, but for sure it isn’t the last one! 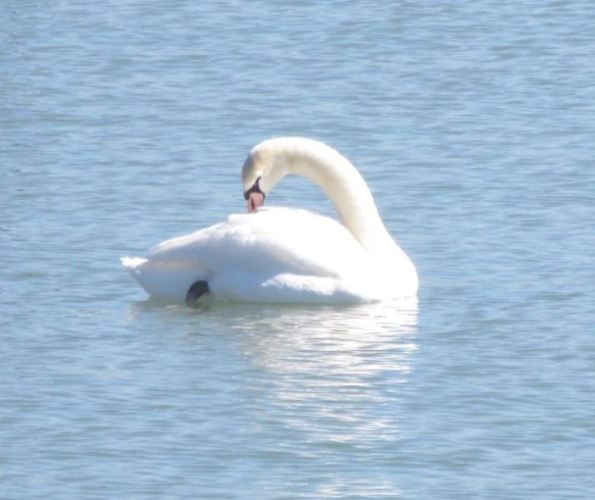 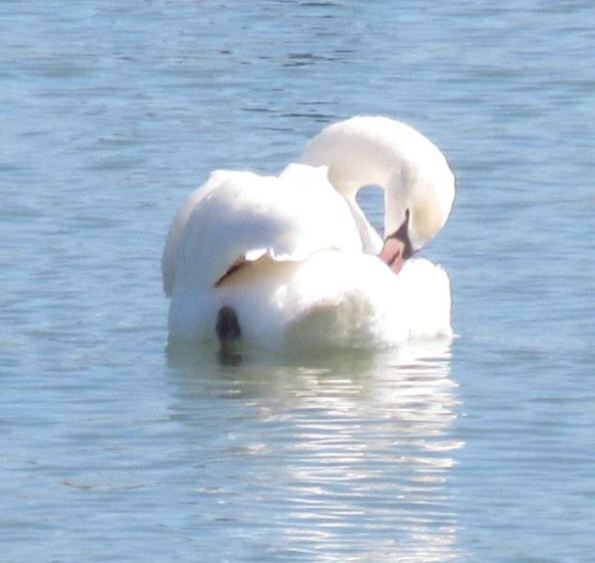 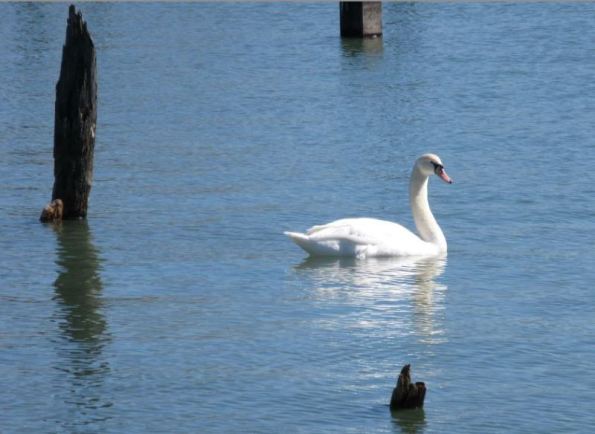 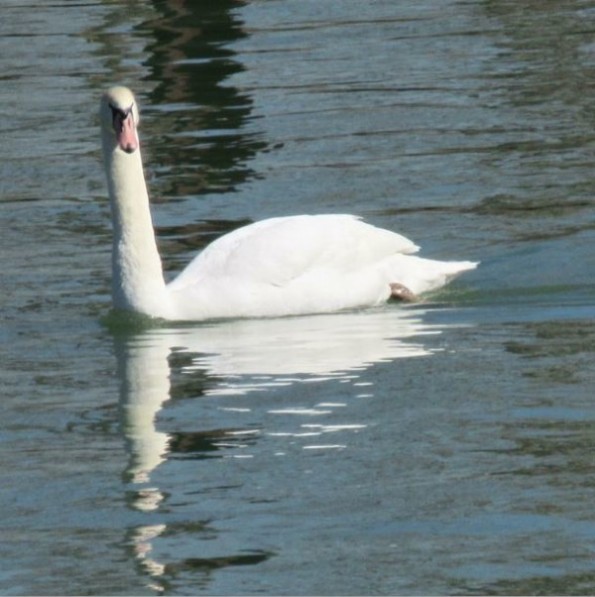 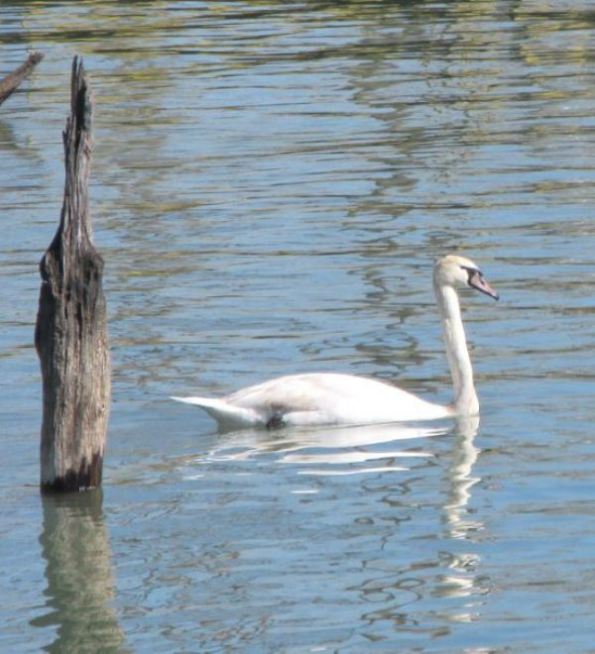 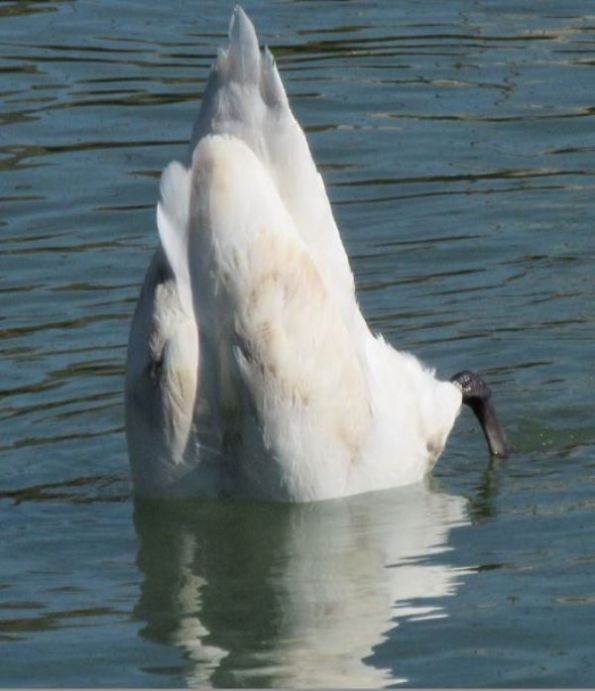 P.S. – I walked another mile at this venue, thus adding another six miles to my tally.

This is my first blog and I enjoy writing each and every post immensely. I started a walking regimen in 2011 and decided to create a blog as a means of memorializing the people, places and things I see on my daily walks. I have always enjoyed people watching, and so my blog is peppered with folks I meet, or reflections of characters I have known through the years. Often something piques my interest, or evokes a pleasant memory from my memory bank, so this becomes a “slice o’ life” blog post that day. I respect and appreciate nature and my interaction with Mother Nature’s gifts is also a common theme. Sometimes the most-ordinary items become fodder for points to ponder over and touch upon. My career has been in the legal field and I have been a legal secretary for four decades, primarily working in downtown Detroit, and now working from my home. I graduated from Wayne State University with a degree in print journalism in 1978, though I’ve never worked in that field. I like to think this blog is the writer in me finally emerging!! Walking and writing have met and shaken hands and the creative juices are flowing once again in Walkin’, Writin’, Wit & Whimsy – hope you think so too. - Linda Schaub
View all posts by Linda Schaub →
This entry was posted in Uncategorized and tagged geese, nature, River, Spring, swans, walk, walking. Bookmark the permalink.

87 Responses to March madness and gladness.