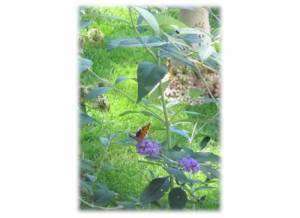 Nope, I did not transpose this word. Just feeling badly for the lack of beautiful butterflies this year. Recently the Warren Pierce show featured a Lepidopterist, or expert on butterflies, who advised that the Monarch butterfly population for Mexico City, their Winter migration home, was down by nearly sixty percent. The drought across the United States was not only hard on humans; it affected the butterflies as well. In my treks around town, or even to my own backyard, I noted the lack of these beautiful creatures flitting about, but attributed it to the damp and rainy temps. Butterflies like to bask in the warm sunshine while they take nourishment from the flower nectars you offer them in your yard; you won’t see them when it is damp or cold. I bemoaned the sudden loss of my three beautiful Buddleias, or butterfly bushes, this Spring. I planted them in 2010, and they flourished and attracted many types of butterflies. When it came time to prune them down, as I do each Spring, they were mere sticks with no sap. I was so disappointed. They were easy to maintain, save deadheading the huge spent blossoms, but they were butterfly magnets. I can only hope my Coneflowers will continue to draw butterflies as they did in the past. I worried about planting new butterfly bushes since the weather prognosticators said wild weather was in store for the Summer of 2013 – they had that right. This morning I had goose bumps while I did my nearly four-mile walk and I could have used a sweater!

In 2010, I decided to create a butterfly garden. I studied the online articles on how to attract different butterflies. I bought the three butterfly bushes and supplemented my Coneflower garden by adding about six more plants, since butterflies are attracted to the colors pink and lavender. I bought two butterfly houses for them to seek refuge from the damp or windy weather. I created puddling dishes, which is merely filling low clay dishes with sand and keeping the sand moist, to provide the butterflies somewhere to drink. I placed several large flat rocks around the yard for them to sun themselves. My neighbor, Marge, bought me a book about identifying butterflies and I settled back to enjoy the show. I snapped several pictures of butterflies clinging to the butterfly bushes. It was not difficult to take a photo since they’d alight and linger for long periods of time to enjoy the nectar of the delicate blossoms. I figured I must have followed the instructions correctly as I was blessed with a bounty of beautiful butterflies.

That same year, Marge was walking through the Wyandotte Art Fair and visited a tent where a woman was selling “ready-made Monarch butterfly kits” which guaranteed, over the course of a few weeks, you could watch your baby caterpillars grow, form cocoons and later you could release your own Monarch butterflies into your backyard. The kits were essentially a huge potted Milkweed plant, where a half-dozen Monarch eggs had attached, and mosquito netting wrapped around the plant and pot, plus a “how-to” pamphlet. Marge excitedly called me from the Fair to ask if I was interested and she’d bring one home for me. Sure I was game! After hanging up the phone, I had visions of Monarch butterflies by the dozens gently flitting around my head and landing on my shoulders while I worked out in the yard. I got my kit and kept it in the basement so no birds would try to peck through the netting and get to the caterpillars. The eggs hatched and the baby caterpillars emerged. We ended up having about eight baby caterpillars apiece. Monarch caterpillars ONLY eat milkweed and these little buggers started eating the milkweed plant with great gusto and soon stems of empty leaves littered the dirt in the pot. I watered the plant daily and monitored the progress of the caterpillars which grew in leaps and bounds. Marge and I reported on our “babies” daily via phone, e-mail or with over-the-fence chatter. Soon, it was obvious that the milkweed would run out before the caterpillars were ready to form their pupas, or cocoons. Oh-oh, now what do we do? The resourceful Marge contacted the woman who sold her the kits and in an effort to preserve the Monarch population, the woman rushed over with large handfuls of wild milkweed she pulled off the side of the expressway in Flat Rock. She brought enough for Marge to share with my caterpillars. Well, chomp, chomp, chomp – those caterpillars ate like teenaged boys. We neared the end of our milkweed stash and thankfully the cocoon process began with multiple greenish-gold pupas being formed. We had to “tie-off” each cocoon and suspend it on a thread in mid-air in a safe container, to guarantee the butterfly would not escape somewhere, before we could take the container outside and release each one individually. We followed the procedure to the letter and awaited the first emergence, with as much anticipation as the recent Royal birth.

Marge had one release that quickly flew out of the container, but who could tell if it returned to her yard or not? The Monarch butterflies do look the same, after all. None of my butterflies emerged. I had five cocoons left, and rather than risk all being “duds”, I contacted an Allen Park woman, whom the local newspaper had featured the week before. Karen Hofman turned her backyard into a haven for Monarch butterflies by growing only milkweed. She has nurtured hundreds of caterpillars through their release and documents their development and release with photos. I looked her number up and within hours I handed over my cache of cocoons and wished her good luck. She later contacted me to say three of the five had emerged and were beautiful. So our Monarch butterfly experience was a little bit of adventure, and somewhat of a debacle, but a learning experience nonetheless.

The caterpillar does all the work but the butterfly gets all the publicity.
~Attributed to George Carlin