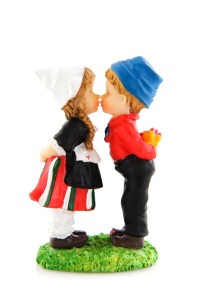 Enroute to Council Point Park, I pass a house that has a retro-looking Dutch girl standing all alone in her klompen in a backyard flower garden. I can’t help but wonder what happened to her counter-part? I know it sounds silly, but you only ever see the pair, i.e. the Dutch girl and boy, standing on tippy toes in their clunky wooden shoes puckering up with one another. So what gives? Did the kissin’ cousins have a tiff? Is the Dutch boy in another part of the yard? Did her Dutch buddy break? If you’ve ever had resin yard decorations and dropped them, you know they will shatter into a million pieces. So many questions; so little time.

The Dutch kissing duo used to be a popular item for yard art but I don’t see them much anymore. Perhaps they went the way of wooden whirligigs. But this particular solo Dutch girl has a retro look, unlike most of the more-modern Dutch kids kissing where both statues are short and stocky. This young lady is tall with very pale markings and is reminiscent of a pair that adorned my grandmother’s backyard many, many years ago. Nearly every day when I see this lanky Dutch figurine it takes me back many years to when I was a little girl visiting my grandmother. I Googled around for an image of a vintage Dutch kissing duo to display with this blog, and the pair above is exactly the same as my grandmother’s.

Today’s blog highlights my grandmother’s garden since I have now reached 240 miles walked in 2013. This mileage marker represents the same distance to travel one way from our house to my grandmother’s house in Toronto. The trip was accomplished in exactly four hours door-to-door. We left at 6:00 a.m. and arrived in time to coffee klatch with my grandmother and aunt who lived together, plus half the neighbors who saw us pull up and unpack the car. My grandmother would put on a pot of coffee and filled her huge steam kettle to brew some tea and we brought homemade goodies that my Mom had baked in anticipation of our visit. We gathered around the kitchen table, that is, those of us lucky enough to get a chair … everyone else propped up against the sink or stove to catch up on all the news since the last visit. Sadly, most of the group are now gone and the house has had new owners for decades.

My grandmother lived five miles from downtown Toronto just off busy Dundas Street. Her house was smack dab in the middle of a block of row houses, all attached and nearly identical, each with a postage-stamp-sized lawn out front. The backyards all were long and narrow. Out front at Nanny’s house, there was really no room for any yard art, flowers or creativity, plus a huge tree encompassed the entire front yard. The tree was great for shading the big porch which often welcomed half the neighborhood in the Summer for small talk and big bowls of ice cream, but it sure prohibited any flowers to adorn the front; believe me, the backyard well made up for it.

After I was born, my parents moved from an apartment in Toronto out to the suburbs, to Oakville, which was about twenty-five miles away. We’d go to visit my grandmother about once a month, and after the initial hugs and kisses, she’d always invite me outside to see her yard. She would take my small hand in her large callused hand and lead me down the main path in the backyard. Nanny was very proud of her collection of flowering “hens and chicks” which grew in reckless abandon up and down the sidewalk from the back door to the garage. As you stepped out of the back kitchen into the yard, you couldn’t miss those hens and chicks anymore than you could fail to see the Mama Rhode Island Red hen and her four chicks trailing behind her parallel to the sidewalk. The flat wooden barnyard feathered friends were a gift from a relative and added a touch of whimsy to the yard. Well, we’d weave through wooden hens and chicks and the plants as well, and occasionally Nanny would pull away from me to bend over close to the ground, nearly tipping over, to snag a weed that dared to spout in the sidewalk crack. She’d always carry a little paring knife in her pocket to clip off a few weeds or snap off a long stalk of fresh rhubarb for me to have when we got back into the house.

As we walked toward that rhubarb plant, at the very end of the sidewalk was a weathered, brick-red wooden garage which supported several rows of colorful Hollyhocks. Amidst the Hollyhocks, the Dutch girl and boy were in a permanent lip lock. In one corner was a plethora of peonies and the other corner was the many-decades-old rhubarb plant. A flat, wooden, ochre-colored bulldog with a menacing face “guarded” the rhubarb bush and had not left his post in more years than anyone could remember. Nearly every time we’d go out there, Nanny would point at it and tell me she’d had that bulldog since my mom was a toddler. Indeed, there are pictures, circa late ‘20s, in our old photo album of my mom standing next to the bulldog. Likewise, there are near-identical pictures of me at the same age, some thirty years later, standing next to him, screwing up my face like I was about to cry.

My grandmother had a green thumb and she always kept a few plastic baggies and some paper towels in her purse. Wherever she went, if she liked a houseplant or an outside plant, she’d take a “slip” and place that cutting in some moist paper towel and slide it into the baggie and stash it in her purse. She was relentless if she saw something she coveted. We once took her to Frank’s Nursery and she wandered away from my mom and I and eventually returned to our cart, her hand filled with “slips” – my mom was aghast, and well … Nanny was quite nonchalant about it. She brought them home, we put them in water, and by the time she returned to Toronto a few weeks later they had rooted. She had houseplants all over the sunny window ledge in her back kitchen and a massive Christmas Cactus sat proudly atop her ancient Singer treadle sewing machine – good thing she only did hand sewing as the plant was way too large to be disturbed. It got an abundance of sunlight on its perch and bloomed profusely every year … one Christmas she had a record one hundred blooms. I like to think I inherited my grandmother’s green thumb for flowers – I know I have a green thumb for weeds as I can grow them effortlessly. (Smile)

Don’t wait for someone to bring you flowers –
plant your own garden and decorate your own soul. – Anonymous