All agog to break bread with Dad. 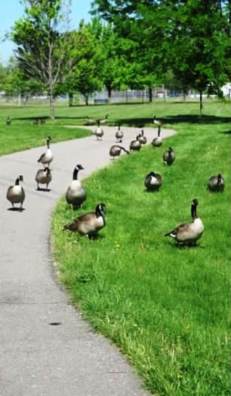 What’s good for the goose is good for the gander, so since we honored Mother’s Day, we must also fête our fathers as well on their special day. It appears this is what you do in the avian world as well, because look what we have in the photo above … . at least fifteen, full-size geese racing down the perimeter path at Council Point Park so that they could break bread with their respective fathers. Given the amount of geese at the Park, there could be several generations of geese gathering to wish Dad their best blessings on this Father’s Day. Just sayin’.

Truthfully, I guess you could say that I staged this event. I followed up a two-hour morning session of yanking weeds, which were here, there and everywhere in the backyard, with a trip to Council Point Park. I often tell you in my blog posts how I feel like the Pied Piper of Hamelin when trodding along the perimeter pathway and the squirrels start dashing to and fro, waylaying me in an effort to ply me for treats. (P.S. – they really don’t have to ply me too much, as I’m always willing to shell out for them.) Often, if I don’t act quickly enough and toss a few peanuts to them, because I happen to be visiting with someone, looking the other way, or perhaps taking a picture, they seek to distract me and get my attention. It is all about them sometimes. These Park squirrels are not shy about walking behind me until I turn around and acknowledge them. Sometimes I see their shadow. Sometimes I hear the click, click, click of their toenails, and still other times … well, you know how you get the feeling someone is trailing behind you …well, I get that feeling and I’ll swivel my head around. Sometimes I know I have a follower because a walker approaching from the opposite way on the path will smile and say “looks like you’ve found a friend” so I turn around then. Well, I enjoy interacting with those squirrels.

But … as for the geese, well, that is a different story. I cannot conceal my disappointment that the mallard ducks are gone because that was kind of nice to stand on the cement landing, toss bread out and watch them diving or paddling over to grab some pieces, their beautiful, iridescent, teal-colored heads glinting in the sun. The geese are okay – a little disgruntled, loud and often a tad too animated, but I enjoy watching them interact with their offspring . I defrosted some stale bread I had saved in the freezer and then crumbled it all up this morning to take “to go”. When I set out on the perimeter path, there was nary a goose to be found, but as I rounded the bend I saw at least two dozen Canada Geese grazing on the grass in the “donut hole” of loop #1 of the perimeter path. I thought to myself “how nice – perfect timing since I’ve got all this bread to share and there is a crowd” … so, I reached into my bag and got a hefty handful of Aunt Millie’s whole grain bread and pitched it at the eager group. One goose, who was accidently pelted with a piece of bread, turned around and hissed at me. As he quickly snarfed down the dried yeasty tidbits, I thought to myself “well, you big baby … man up, it was just bread” and I kept tossing out handful after handful. I had a good-sized bag of bread, and, as usual there were takers … a few too many actually. Soon several more geese came waddling over, then a few more, and more … quickly geese were surrounding me as they awaited a second helping. Amused, I tossed out more bread chunks. At first this gaggle of geese caused this girl to giggle. But, by now, I could hear the gears clicking in the brains of the remaining unfed geese as they stared at me as if willing their benefactor to toss out more tidbits. Well they certainly have my M.O. don’t they? The very accommodating person that I am, I repeatedly reached into the bag until I had hefted out the second-to-last handful . It was then they all charged from the center of the grass to come over to the path where I stood. Oh-oh. What to do now? Geez – this was more like a horde on the rampage than a few geese, who, like me, were out for a Sunday stroll. I grabbed up the dregs of the remaining bread and threw it in the opposite direction, hoping to distract them from me, as I grew wary watching their expectant and rather annoyed faces. One even flapped his wings at me. Yikes!! I stuffed the empty bag into my pocket and loudly proclaimed “all gone” and started to turned on my heel to leave. Their honking and hissing continued. Curiosity got the best of me and I did it – I just had to turn around and look to see if they were following me, and they were. About fifteen Canada Geese walking down the center of the perimeter path and me empty handed, with nothing to offer them. Suddenly this gaggle of geese was not making me giggle. Gulp. I waited for a group of three women walkers to round the bend and get closer to me so I could quietly join their group. As they came upon the scene, one elderly lady threw up her hands, and said “oh my goodness – will they attack us – why are they all together like this?” Since the ladies obviously hadn’t witnessed my interplay with the geese, I just played dumb, merged into their group and commented on the beautiful weather, while stating “oh them … they are just looking for a handout – I wouldn’t worry about them at all.” Whew! I’ll lay off feeding the geese for awhile and instead will wait for the ducks to return – they are much more docile. After reviewing the many pictures I managed to get of the group, it appears that the lead goose who waddled in front of the others was saying “Charge!!!” I am now rethinking taking bread to the Park going forward.