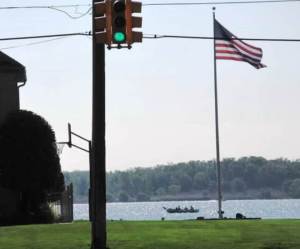 Forget the R-E-S-P-E-C-T that Aretha sings about … I was ready to launch into song myself, right along with the many songbirds that dotted the canopy of trees along Emmons Boulevard as I set out on my walk today. Why? Just because it was so cool and refreshing, albeit a little windy, with a sky unmarred by clouds and a brilliant sun.

Because of yesterday’s on-and-off rain and possible mosquitoes, I decided to abandon a visit to Council Point Park where it is dense and bushy, and head instead to the River. The 12-15 mph winds caused the flag at Biddle and Jefferson to flap furiously and the ripples on the water were giving the early morning pleasure boat riders a wild and wavy trip. Most of the seagulls, who swooped down low looking for handouts, resembled Alfalfa from “The Little Rascals” with their ruffled head feathers.

Standing on the cross-streets of Emmons and Biddle, I lingered as long as I could, just loving the cool morn. I dread the heat and humidity that is slated to begin Friday. I popped over to the River’s Edge Marina for a quick look-see and potential photo ops, but there were none, so I began my trek home again.

My round trip to the River and back added five miles to my total and I arrived home feeling like my brain had been aired out and I was ready to take on the world.