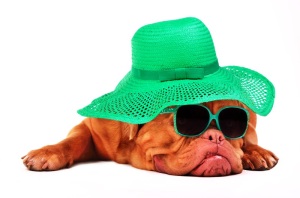 The Dog Days of Summer (named for the alignment of the sun and Sirius, the dog star) usually lasts about 40 days, from July 3rd to August 11th.

In Michigan, they were here for a couple of days, then just romped away.  Siriusly!

Perhaps they weren’t willing to share the spotlight with Pluto?

Today is the anniversary of the moon landing back in 1969. Somewhere in my old desk downstairs is the front page of “The Detroit News” commemorating the lunar landing, which seems like old hat now that Pluto is sending pictures back to Earth, from some three billion miles away. I wonder how many youngsters found out last week that Pluto was a planet and not just a cute Disney-animated pooch?

We have a stretch of good weather for this entire week, or so the weather folks tell us. I believe we have finally willed our rain to go away for awhile, and, it has landed in Southern California where the song says it never rains, but has been raining cats and dogs there for several days.

It was still a wee bit warm and stifling when I left for my walk, but loads better than the past two days. I wondered where I’d travel today because, quite frankly, I lost track of what happened with the weather yesterday. Generally, I don’t walk in the Park if it rained recently. I knew all the weather forecasters called for severe weather Sunday afternoon, but happily that didn’t happen – I don’t even think we had a single drop of rain. I know there was no water pooling on the top of my ornamental milk can when I stepped outside this morning. Hmmmmm.

I decided to just head to the River. Along the way I saw two German shepherds shepherding a very large man. He was huffing and puffing behind them as they strained on their respective leashes, clearly going where THEY wanted to go. As to their master, he was struggling mightily to keep up with them. I also saw the two snorting and sniffling English bulldogs with their owner, a wisp of a woman. She didn’t need to scramble to keep up with the pair as they ambled down the Boulevard, leaving a trail of spittle and drool behind them. Their leashes are almost an afterthought as she holds them limply in her hand. Occasionally, the trio stopped on the sidewalk where she’d offer them a sip from a water bottle she was carrying. I watched them tip their huge heads back to drink … glug, glug, glug, as that bottle of water hit the spot. I’ve never seen dogs drink like that before this pair.

I passed the corner house where the dog rules the backyard. There is a section of the patio devoted to the family dog, with a long and comfy pad that rises off the hot concrete, a small wading pool and a beautiful ceramic bowl with a bone motif filled with clean, cool water. Dog toys are scattered in the area as well. Then, there is the large house where, on any given day, there are at least 50 fluorescent yellow-green tennis balls in the backyard. I guess the word “fetch” is not in this dog’s vocabulary, or perhaps the owner doesn’t collect them until he mows the lawn?

While hoofin’ it today I added four miles to my total, but I’m nodding off as I write this – just dawg tired I guess.