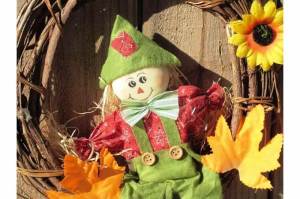 There were many descriptions for this beautiful Sunday – I simply called it “Sunnyday” instead of “Sunday”, but it was also stupendous, super, spectacular – well, you get the picture.  It doesn’t get much better for mid-November in Southeast Michigan.  Today is the beginning of firearms deer hunting  season and unless the hunters headed to Michigan’s Upper Peninsula, it will be difficult to track those deer without snow.

I left a little later than usual and the sun was already beaming.  Within a few blocks of the house I realized I was way overdressed and getting warmish.  I probably should have gone home to lose some layers, but I didn’t want to lose momentum.

Just about the time I flung open my coat and pulled off my gloves, I noticed a man vigorously raking leaves from under a humungous maple tree.  As I neared him, I saw the biggest rake I’ve ever seen propped up against his hip, while he held it steady with his foot.  He was mopping his brow from all that hard work.  Since he was in shirtsleeves, I remarked “you don’t often get to do yardwork in November in shirtsleeves!”  He grinned and said “after I finish here I’m going to play a round of golf” … I think everyone is enjoying this latest Indian Summer.

When I left the house, I was a bit indecisive where to walk on this beautiful day – a couple of loops at the Park, or go to the marina?  I finally decided on Council Point Park and saw, upon entering the parking lot, that a lot of people had the same idea as me.  I waved “hello” to a few of the regulars and of course the main topic of conversation was the beautiful weather.  I noticed many of the trees along the trail are now bare, yet some of them still have green leaves; the many evergreens also provided a hint of color to the landscape.

Two loops around the Park and then I stopped at Memorial Park to extend my leisurely stroll just a little longer, but … finally it was time to head home, having added five miles to my total and enjoyed nature’s offerings.

I’m sharing this photo of a harvest wreath that hangs on a fence which I pass on my daily trek – I think this little felt fellow just personifies this beautiful Fall day.