Forget figgy pudding; I was craving fish eyes and glue. 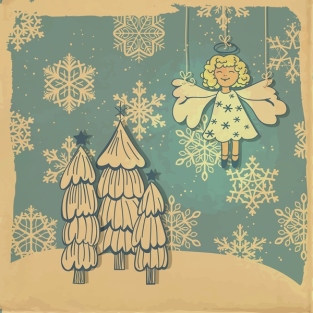 Just like this vintage picture above, I’ve been feeling a mite nostalgic these days.

Well, there’s nothing wrong with that – after all, that’s what the holidays should do – evoke a lot of nice memories from yesteryear, as well as creating beautiful moments today to cherish later.

Last night I was listening to WJR’s 50th annual Christmas sing.  Members of the radio station’s staff gathered at Campus Martius in downtown Detroit to sing Christmas carols.  Their group, plus the large crowd, were not exactly like those traditional Victorian carolers, but, the somewhat off-tune voices made me a little nostalgic nonetheless, since that singalong triggered a few nice memories from my past.

For years, as a member of a Brownie troop, I’d pin a big sparkly Christmas corsage on my drab-looking uniform and accompany my fellow Brownies to entertain the seniors at the local nursing homes. As a student who attended the Ontario Conservatory of Music, all of its pupils practiced long hours together on their various instruments, in order to give polished holiday recitals also at local nursing homes during the holidays.  I could play a mean “Rudolph the Red-Nosed Reindeer” on my accordion back in the day.

I know I often take a fond lookback at memories, Christmas or otherwise, in this blog. Many of those fine moments center around my family … and food.  Often, just a whiff of a particular food will evoke some pleasant thoughts – look at the apple and cinnamon smell story I told you last week.

I was in Meijer a few weeks ago picking up a few items and getting my walk in around the store. I resisted the urge later that day to write a post about how the trending gifts for kids this year seemed to be all Star Wars related.  With fondness, I remember getting a new dolly and a wardrobe for her every Christmas; later, when I was older, it was Barbie and friends and their outfits and accessories.  Sometimes, there was a make-believe shopping cart or an Easy Bake oven to pretend you were like Mommy.  Back then, little boys coveted trucks or trains or a stick horse to play “Cowboys and Indians” and getting those types of gifts made them giddy.  So, lightsabers and LEGO Star Wars Death Star™ Final Duel toys just don’t seem very Christmassy to me.

But enough of me – I sometimes think that I belong in another era and that I’d like to jump off this world as it spins too fast for me.

That same day I was in Meijer, I decided to pick up a few treats to enjoy at the holidays. I don’t eat sweets anymore, but I usually pick up a quart of custardy-rich eggnog and get a few boxes of Jell-O pudding in their limited-edition holiday flavors.

But first, I needed to pick up a can of Pam cooking oil spray to coat my new snow shovel which I christened in that freak snow storm we had back on November 21st.  It was a little frustrating when the snow refused to leave the blade, and, then I remembered an old trick of spraying Pam cooking oil on the blade and the snow will slide right off.

I strolled over to the baking section where I saw almost everything was on sale. I snagged a bag of mini marshmallows to make up some ambrosia salad, and noticed the raisins were on sale for a song, so I tucked a few boxes in the crook of my arm because I eat oatmeal with raisins every morning for breakfast.

Next, I hustled over to the cooking oils and sprays where I quickly perused the Pam … it used to be simple, one type of cooking oil spray, but now it comes in butter spray as well as oils like coconut, canola and olive. Sighing, I reached for a can, when a woman came rushing up next to me and said “oh good – they’ve still got plenty of Pam because they’re on sale you know?”  I said “I didn’t know ‘til now and I just needed one can” whereupon she proceeded to tell me, somewhat breathlessly, just how many batches of cookies, and what types, she would be making over the next several weeks.  I didn’t want to be rude, so I smiled and said “sounds delicious – your family is lucky they have you” and then she asked what I would be baking.  “Um,” I stammered, while thinking I was no match for this Martha Stewart wannabe.  I found myself blurting out “oatmeal raisin cookies” which truthfully sounded a little lame next to her Christmas cookie aspirations.    She just said “that’s nice” and which condescending statement left me feeling like I was truly devoid of any domestic genes in my body.

I started to walk away, when she saw the marshmallows peeking out from between the boxes of raisins which I still cradled in my forearm. She decided to try a cooking conversation again and pointedly asked “what do you do with the marshmallows?” as she gestured with her finger at them.  I just blurted out “Rice Crispy Treat Christmas wreaths for my little boy” crossing my fingers that the answer pacified her, and then I said “gotta go – happy holidays to you.”  So, I left the conversation somewhat dejected and feeling inadequate as a cook, which is basically how I feel most of the time, which is why I don’t subject myself to heavy lifting in the baking or cooking department.

I returned to the pudding section where I forgot all about the holiday Jell-O flavors after I spied a box of tapioca pudding. Suddenly, I had a colossal craving for that creamy taste and imagined what a special treat it would be on a cold, blustery and snowy Winter day when I was hunkered down in the house.  I checked the ingredients and the preparation … it looked easy enough, so I snatched up that box of tapioca beads in a heartbeat.  What fond memories I have of a glass dessert dish filled with “fish eyes and glue” with a red or green maraschino cherry on top.

To me, pudding is like comfort food. My mom used to make rice pudding that’d be brimming with raisins and full of spices, or, perhaps there was bread pudding, with its delicious scent wafting through the house while it was baking as I came through the door after school or work.  One special treat about being an only child is that you always get handed a tablespoon to finish up the dregs of pudding in the saucepan; you always get to lick the beaters; or, my personal favorite … you get to enjoy the crispy au gratin crust on baked macaroni or shepherd’s pie that Mom peeled off and slapped on a dish and said “blow on it first before you eat it.”  Yup, the pure joy of no siblings clamoring for these goodies, so there was no need to share.  It is a wonder I was not a roly-poly child.

Today, I awoke to sidewalks and streets filled with crispy precipitation. The reports of traffic incidents on black ice-slickened side streets and expressways kept me on the inside looking out – why risk walking on icy, snow-encrusted sidewalks?

I decided that today was the day to make that tapioca pudding.

I gathered my ingredients together, salivating at the thought of that creamy goodness. Perhaps I would segregate one serving for tomorrow and eat the rest of the pudding out of the pot … just like old times.

I followed the instructions to the letter, and soon that intoxicating smell of vanilla extract filled the air with a wonderful aroma. But, something went terribly wrong when my tablespoon was sticking straight up in the saucepan, without any assistance from me.  The pearls were a little gummy and the pudding was the consistency of wallpaper paste.  I shook my head in disbelief.

Tomorrow, I’ll strain out the gooey “eyes” and use the pudding to seal down those pesky wallpaper seams that threaten to separate and try to curl up.

I’ve learned my lesson … next time I’ll leave the box at the store and the memories in my mind.

10 Responses to Forget figgy pudding; I was craving fish eyes and glue.