I saw MY shadow … 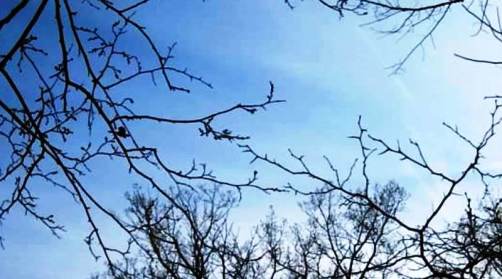 … even if Punxsutawney Phil did not see HIS.

But, then again, that groundhog was up and at it earlier than I was this morning.

It was a little gloomy and dreary out when I left the house, but on my return trip, I watched as the sun finally lit up the sky and cast a shadow on the stockade fence on Emmons Boulevard as I walked by.  In my own shadow, I saw long legs, a funny-shaped hat with a floppy brim and a very puffy coat.  That coat made me look almost as roly-poly as Phil.

With Winter now at the midpoint mark, with a mere six more weeks ‘til Spring, calendar-wise anyway, the groundhog’s admirers waited with bated breath for Punxsutawney Phil to emerge from his burrow and make his prognostication about the weather going forward. This celebrity groundhog, through his handler, told us that we’ll have an early Spring.  Perhaps someone tipped Phil off that we’ve been having a mild Winter thanks to El Nino, so an early Spring was pretty much a given.

In the Twittersphere, Local 4 forecaster Paul Gross scorned Phil’s prognostication based on the lack of sun. In fact, Paul countered Phil’s forecast by attaching a picture of Spud, his fake groundhog, with the sun as a backdrop in the photo.

Meanwhile, Woody the Woodchuck, Michigan’s own weather prognosticator, saw her shadow and proclaimed six more weeks of Winter were in store. She’s actually got a better prediction record than Phil, but doesn’t get the notoriety that he enjoys.

The Twittersphere was not only buzzing with tweets at #GroundhogDay, but the songbirds, in their own twittersphere, were tweeting as well. I guess the sun, once it arrived, made them happy, even if there was a thick layer of frost on the grass and a chill in the air.  It seemed as if their song emanated from every bare branch that was silhouetted in the pale blue sky.

I had intended to take a trip to Council Point Park, but, once I saw the heavy frost on the lawn, that put a kibosh to that idea. The asphalt on the walking path is prone to collecting black ice when the temps get below 32 degrees, so, instead I trekked to the tracks and back.

I saw no groundhogs on my journey, just one fat squirrel munching on some dried kernels of corn that someone had strewn on the sidewalk for him. Poor thing – he had the worst case of mange I’d ever seen.  There was a wide, bare strip from the back of his neck all the way to his tail; if he were a black squirrel, at first glance I might have mistaken him for a skunk with that wide strip of bare skin that parted his fur.

Winter is on my head, but eternal Spring is in my heart. ~Victor Hugo

2 Responses to I saw MY shadow …