You have my heart. 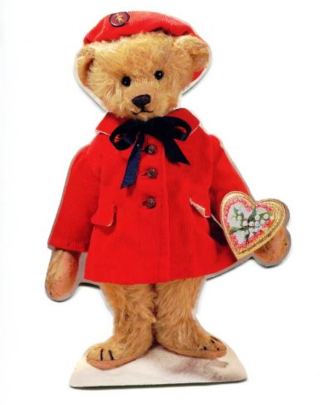 Today is the day that commemorates love, and nothing says “I love you” more than an old-fashioned valentine.

Yesterday, I searched in vain for a pair of genuine Victorian Valentine’s Day cards, that my mom’s great uncle Joe sent to us after he opened up an antiques shop in Victoria, B.C. back in the early 90s. Those valentines were three-dimensional, pop-up cards and very ornate looking with their curlicues, cupids, hearts and flowers.  There were even doves entwined by ribbons in their beaks.  We used to put them out with our Valentine’s Day décor and always put them away after the holiday for safekeeping.  Well, they are in a safe place all right – somewhere in the house, and, finding them is another project for next Winter, so I can scan them in to use with my Valentine’s Day 2017 post.

Ahh, well … I decided there were plenty of other cards I could use to lend an old-fashioned air and chose this one. The back of the American Greetings card says this is an American bear, manufactured by the Ideal Novelty and Toy Company, circa 1906, and part of the Yenke Collection.  Well, I noodled around the net a bit before writing this post and found the Yenkes were keepers and curators of vintage bears.  I was immersed in that site for quite awhile since I, too, am an avid collector of teddy bears, though none of my fifty or so bears are deemed antique or vintage.

My mom and I kept every greeting card we exchanged with one another, plus some received from other family members, through the years. Earlier today, as I rummaged around that big gift bag filled with all those sweet sentiments, while looking for the perfect Valentine’s Day picture to accompany this post, the years just melted away.  I saw “To Mommy” signed in a childish scrawl over and over again.  The well wishes eventually evolved and became “To Mom” with my signatures that ranged from flourishes dotted with hearts to my rather boring and hastily scrawled signature I finally settled on later in life.

Most of the birthday cards sent to my mom revolved around hearts and flowers because her birthday was on Valentine’s Day. She was born on February 14, 1926 and would have turned 90 today – it may be true, but it sure doesn’t seem possible.

I decided the theme of this Valentine’s Day post would be old-fashioned love, after two stories I read on that topic this past week.

The first was an article about Ali MacGraw and Ryan O’Neal, now in their mid-70s, pulling up to Harvard University in an antique MG convertible, similar to the one they rode around in during the movie “Love Story”. The pair had stopped in Boston to promote their play “Love Letters, which follows a man and woman who stay in touch through 50 years of letters.  That online piece took me right back to my teenaged years and how much I enjoyed that movie about the wealthy Harvard student named Oliver Barrett IV, a/k/a “Preppie”, who fell in love with the working-class Radcliffe student named Jennifer Cavilleri, a/k/a “Jenny” and their bittersweet relationship.  I remember reading and re-reading Erich Segal’s book, until it was tattered, as well as tear-stained.  Coincidentally, it was published on Valentine’s Day 1970.  Later that year, after the film came out, I went to the Southgate Show with my friend Debbie Varga.  Together we sobbed and sniffled throughout the movie and we were both weeping uncontrollably, as were many others, by the time it ended, no doubt after hearing the line “love means never having to say you’re sorry”, or, prompted perhaps by the sweet strains of the movie’s theme song “Where do I begin?”  So, while clutching a soggy Kleenex in my hand, still crying, and leaving the dark theatre and entering the lobby on that sunny Summer day, I walked right into the theatre’s front glass door when exiting to go outside.  It’s a wonder I didn’t break my nose.

Another love story that piqued my interest this week, was the non-fiction tale of a couple who were sweethearts some 70 years ago. Norwood Thomas was a 21-year-old paratrooper when he met 17-year-old Joyce Morris in London, shortly before D-Day.   Because he was ordered home before he could properly say goodbye, they wrote letters to one another, thus sustaining the relationship.  After Norwood Thomas proposed to Joyce Morris via mail, she misunderstood his proposal, thinking it was a “Dear Jane” letter, and never wrote him back.  They married others.  He became a widower in 2001 and she has divorced her husband of thirty years.  Hoping to reconnect (and maybe rekindle the relationship), Joyce Morris asked her sons to track down Norbert Thomas on the internet.  Bingo!  He was mentioned in an article about D-Day, and after a little detective work, the couple reunited in cyberspace via Skype last year.  Earlier this week, Norwood Thomas travelled some 10,000 miles, from Virginia to Australia, to spend Valentine’s Day with his former flame.

Now there’s a love story for you.

I leave you with a quote on this Valentine’s Day 2016:

“Love isn’t something you find. Love is something that finds you.” ~Loretta Young

4 Responses to You have my heart.