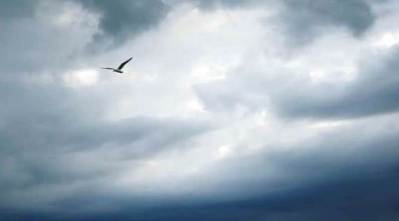 Where the heck did Spring go?   I think it is on hiatus somewhere else, because it sure isn’t here.

I left the house early this morning and decided to head to the marina. The sky was ugly and dark – the color of eggplant in some places and many shades of gray in others.  Truthfully, between the sky and the cold air, the weather did not beckon me to come out of the warm house at all, but,  I am in for the long haul in my walking regimen, and it was cold, but dry, so off I went.

As I headed down Emmons Boulevard, once or twice I glanced at the angry-looking sky thinking indeed it was going to snow, just like the weather folks predicted. No one else was out; they were smarter than me, and were home sipping coffee in their jammies.

At the marina, it was quiet as well, but for the seagulls who were angrily buzzing around near me, probably thinking I had handouts. A small group of them kept swooping down from the sky, then they’d disappear again into the clouds.  One in particular, above, kept soaring and dive bombing me, screeching and looking menacing the closer he got.  Well, GULLp – get away already!  Personally, I think seagulls look inappropriate dropping out of a sky so ugly and dark and with temps so cold … after all, seagulls are supposed to glide effortlessly through a blue sky with puffy white clouds with the occasional pleasure boat skimming the surface of the water in a flawless horizon.  Perhaps this is why they were in an especially cantankerous mood – hey, cold and sunless mornings make me grouchy too.

I stayed at the marina for a while, watching the seagulls, then headed for home. Some weeping cherry trees are already in blossom, their pale and delicate blooms were drifting here and there and landing on the longish grass blades.  I remembered to check out the status of the big magnolia tree; its buds are on the brink of opening, and I hope this cold weather doesn’t freeze those buds before they open completely, for that will be a waste of beauty and might harm the tree as well.

When I was about a mile from home, a few flakes started flying around in the air – at first I thought it was just some of those weeping cherry blossoms trying to hitch a ride on my coat sleeve, then I saw it was snowflakes. Before I got home, those few flakes became flurries and covered my coat but were melting on the grass.  I would say “unbelievable!”  or “say it isn’t snow”, but, it is only April 2nd and we live in Michigan after all.

I think Spring packed its bags and went on vacation … that’s such a cruel joke since yesterday was April Fool’s Day after all.

Well Spring … don’t be a stranger and come back soon, okay?

4 Responses to I think Spring went on Spring Break.