Window on the world. 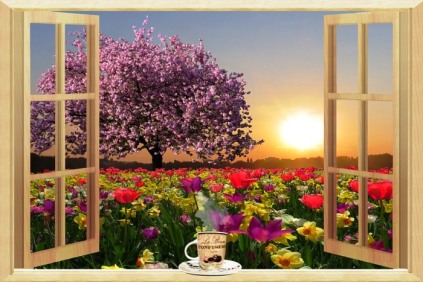 I often long to live in an earlier time – an era of simplicity would suit me just fine.

Just today, the news reported that Elon Musk believes SpaceX might be able to land humans on the planet Mars nine years from now. I already feel like Earth moves too fast for me sometimes, so why would I want to go to Mars?

I am content to just escape for a brief respite … two or three or four miles away suits me fine. A little sun and blue sky makes me even happier; a few birdies tweeting and I’m ecstatic.

My friend Marge has a hummingbird feeder outside her living room window. She can perch in her comfy chair next to a  lamp that has lilacs on it and the hummingbirds, in honing in to sip the sweet nectar at the feeder, see the lilac lamp and keep circling around, trying to come in and check it out.  Marge has a window on the world with only a pane of glass separating her from nature.

Sometimes that’s all you need … a little nature infused into your day to break up the routine.

It’s surprising how quickly nature can banish the ever-present doom and gloom of the day, the endless kerfuffle of the presidential race and even life’s many little conundrums.

Computers are one such conundrum.

The frustrations of the computer are ever-increasing – Windows in particular. It makes me wish we all weren’t so dependent on computers, and, often I long to live in an era of the quill pen, a bottle of ink and parchment paper.

After all, just how many issues can there be with a quill pen, except maybe the nib breaks or the bottle of ink dries up?

When I was a child, I’d watch my mom carefully write out letters and Christmas cards in cursive, frequently blotting the nib of her fountain pen so no unsightly blobs were on the paper. Her slanted writing had no flourishes or squiggles, but she had mastered that task in navy ink on fine paper.

But, in today’s age, it is not so easy anymore and we depend on our computers way too much.

Take my work computer … no really, I mean take it with you because it is nothing but problems.

And internet – it’s up, it’s down. It’s fickle and often unreliable.

Then there’s Windows 10 – please don’t get me started on that topic. Foisting it upon me, free or otherwise, will not make me like it anymore.

So, I headed out this morning – fed up and needing to put some distance between the computer keyboard and screen and me. I needed a distraction from a machine, which at least has the ability to reboot itself to keep humming along.

I needed that reboot too.

So, I decided going down to the River was my way of rebooting myself.

I wended my way through Wyandotte, savoring the shady areas as it was a humid and warmish morning, picking my way across the railroad tracks, and stepping silently as I was sharing the pavement with mounds of maple seeds. Once I reached Biddle Avenue and saw the sparkling water of the Detroit River and the gulls gliding through the brilliant blue sky, suddenly everything was all right with the world once again.  It was a brief nirvana to get me motivated to take on the day.  Yup, those people floating along in their big cabin cruisers or sailboats had nothing on me today.

I stayed a spell, and took a few pictures, then started for home, albeit reluctantly.

I leave you with a thought on this Thursday, which feels like a Wednesday … “The sky is the daily bread of the eyes.” ~ Ralph Waldo Emerson

[Image by Gellinger from Pixabay]

4 Responses to Window on the world.