It’s a patriotic day in the neighborhood. 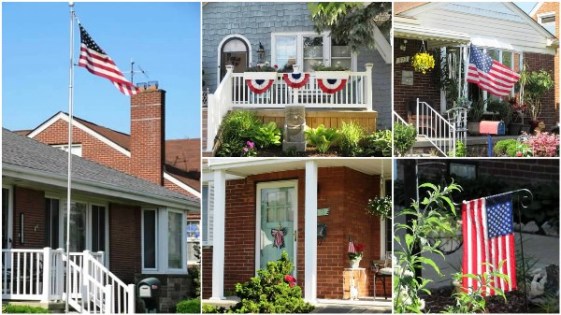 Sunny too, so I think Mr. Rodgers would be crowing about it as well.

The 4th of July is the one day of the year that you can indulge me so I can tell you that “I took a constitutional” without sounding all archaic and stuffy.

Actually the bunting, bows and all that red-white-and-blue swag has been prevalent since Memorial Day, but many more flags were present today. I made a small collage to show some of the decked-out homes.

It was just a petite stroll for me today – the weather was nice enough, but those pesky weeds called to me when I walked out the door, so I figured I’d better heed that call, since I’ve ignored them far too long already. If I stayed away too long, for sure I’d say “pffft” to that task.

While on my constitutional, and ruminating about the 4th of July, I found myself reminiscing about Independence Day 1976 in particular.

Of course that was the year that America celebrated its big Bicentennial.

I was working at the diner while on Summer break from college. Many of my customers clamored for those special Bicentennial coins that were circulating that year, especially the Bicentennial quarters.  The goal for avid coin collectors, as well as many others, was to collect as many of the individual state quarters as possible and slide them into special slotted holders.  Many of my customers were collecting them for their grandchildren.  So, the little black apron I wore with my white uniform was chock full of those Bicentennial quarters at any given time, since they frequently were tendered when I was working the cash register or received as tips.  I had to keep a list of what state quarters were still needed and by whom.

The events leading up to America’s celebration of the 200th anniversary of the Declaration of Independence were varied, as you may recall.

There was a parade of tall ships commemorating the Bicentennial, and, thus the Christian Radich was docked here in Detroit.  Friends and I went down to Hart Plaza for a look-see, and, a week or so later, when fellow waitress Leslie and I spent a week in Toronto, we discovered that this Norwegian square-rigged ship was at the Canadian National Exhibition, so we boarded her there and took a tour above and below deck.  Most of the sailors were tow-headed teens, following in their father’s footsteps.  They spoke no English, but had wide smiles for everyone they met.

I can’t forget July 4, 1976 as I was mowed down by a drunk driver, and that particular incident comes to mind every year. It was a Sunday and I got off work at 3:00 p.m.  I went home and changed into a red-white-and-blue, stars-and-stripes motif top and red shorts, and I was feeling festive for the big holiday as I set out on the bike, intending to get a long ride in before dinner.  Little did I know as I was riding along, minding my own business, that a woman would be leaving Leone’s Bar, totally disregarding the stop sign.  She knocked me down, but, except for some bruises on my legs and a little road rash, the bike took the brunt of the damage – the front end was mangled, the tire flat as a pancake.  She never stopped, but went on her merry way.  I picked myself and the bike up, and carried it two blocks down to the police station.  Luckily I was able to memorize part of her license plate and I could give a good description of her and the car to the police, who made a special point to catch her for leaving the scene of an accident.  The police were especially helpful because I knew many of the squad since Carter’s prepared the prisoner meals three times a day and the officers often stopped by to pick up the meals.  The diner also offered the proverbial coffee and donuts free for our LP cops.  The next day they had tracked her down – she said the sun was low on the horizon and she stopped to give me aid, then moved on since I was fine.  We were given a court date and I spent my day off at the courthouse, as the Lincoln Park judge ticked off each case on his busy docket.  Our matter was near the end.  When we were finally up, the Judge gave her a moving violation for going through a stop sign.  That was it.  I’ve never climbed aboard a bike again, though insurance paid to have it restored to its original state – now I do the exercise bike … it is safer.

Hope your Fourth was full of fun, family or friends and good food – enjoy the Independence Day holiday and be safe everyone!

4 Responses to It’s a patriotic day in the neighborhood.