It’s a “BOULEtiful” thing – the boule on the Boulevard. 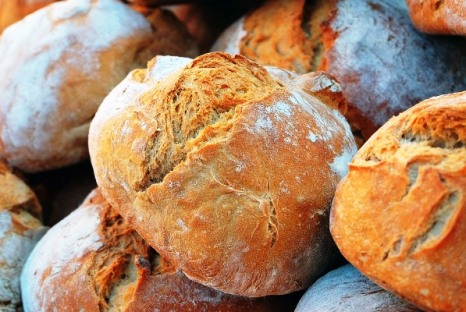 When I left on my walk this morning, it was downright chilly! Dark clouds loomed overhead and the sun obviously slept in.  The sky looked as if it would open up any moment and pour down raining, so I took along an umbrella, hoping not to get drenched.  I walked pretty fast to get my four miles in, but it never did rain.

The neighborhoods were quiet and I was happy for that – less cars to watch out for, plus, I could gather my thoughts for today’s blog post.

I am sure you’ll agree that it was another sad week, as the world has grown weary with such events as the memorial service for the Dallas police officers Tuesday, and the tragedies in France Thursday and Turkey yesterday. I travelled a lot when I was younger and visited Turkey while on a Mediterranean cruise back in 1981.

A few countries remain on my bucket list and France and Italy would be two destinations that I’d like to visit someday. Any chance of conversing in French with the natives would probably not happen though.  I studied the language of French in elementary school in Canada, then later for several years in college, but those vocabulary words are long gone from my brain, so I’d hardly admit to having spent endless hours memorizing genders, words and conversations from my French books.

After the tragedy on July 14th, I couldn’t help but remember a young French girl who spent a Summer as a runner at the first law firm where I worked. A family member was a legal secretary at the Firm, having emigrated to the U.S. from France many years before.  The young lady quickly fit in and her English was a little halting, but there were absolutely no communication issues.  I made the mistake of admitting I had studied French and she immediately launched into a lively discussion, and I had to stop her to sheepishly admit I only caught about one tenth of what she said.  For Bastille Day, the support staff decided to throw her a party, so we pooled our money to buy croissants from Jacques Patisserie and a sheet cake festooned with an outline of the Eiffel Tower.  We decorated the conference room with balloons and streamers in her country’s colors of red, white and blue.  She uttered the words “Mon Dieu” and happy tears leaked out and rolled down her cheeks as she took it all in.  I vaguely remember the words “Fête de la Bastille” rolling off my tongue that day and sounding pretty impressive – that’s because there were no “Rs” to trill … I never could trill my Rs which made my conversational French a little lame.

I thought of that little get together on Thursday evening after the news broke, and, then again this morning as I strode purposely and quickly down the Boulevard.   I gave a little smile as I passed the place where some kindly soul had placed a huge boule on the sidewalk in front of their house earlier in the week.  The birds and squirrels have been having a lot of fun with that big bread bowl.  I happened to walk by shortly after it was deposited on the front sidewalk.  It was still very fragrant in the warm and humid morning air and I instantly hankered for a piece of crispy bread as soon as I smelled it.  As boules go, it was extra huge and had been “gutted”, then chunks of soft white bread “innards” filled the hollows of that otherwise crispy French bread.

At the time, I wanted to say “ooh la la” as I approached and saw the squirrels and sparrows feasting greedily on this baked treat. While some sparrows were perched up top nibbling delicately on the crusty bread, I saw other tiny brown bodies buried in the soft pillow of bread inside the boule.  Of course, a squirrel stalked nearby, occasionally running up to scare the birds and grab a chunk of soft bread or even trying to gnaw on the crunchy exterior.

So, I’ve monitored the progress that the “gang” has made on this boule on the Boulevard, so that as of today, the sparse remnants are probably hard as a rock, but are still a draw for the critters.

[Image by Couleur on Pixabay]

4 Responses to It’s a “BOULEtiful” thing – the boule on the Boulevard.