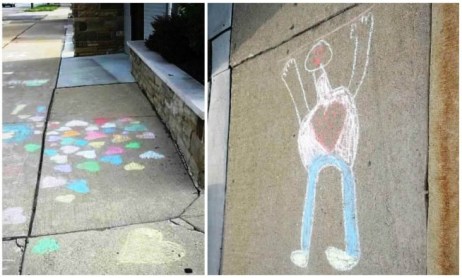 I actually surprised myself by reaching my 500-miles-walked goal a few days early. At the beginning of the year,  I set that milestone marker for myself to hopefully happen on Labor Day.

I guess it helped that we had weeks and weeks without a raindrop in sight and I could venture out without fear of getting soaked with a passing shower during that morning trek.

In retrospect, I might have achieved 500 miles earlier, had I not been hampered by the ever-present heat and humidity, not to mention being hobbled by blisters and bandages on both ankles and my feet, for most of August, and even now in this first week of September.

You may recall that I wrote a post three weeks ago about the mysterious dots on my legs and a large blister. Two of those peculiar-looking dots, which I referred to as insect love bites, got infected and ended up as huge blisters.  I had to go to the doctor, and, they confirmed it was infected bug bites, but, to make matters worse, while valiantly trying to cover the ankle blisters until they broke on their own, the industrial-sized Band-Aids I used were made of latex and I developed a rash as a result of a latex allergy.

It hasn’t been much fun these past three weeks, but, I was bound and determined to keep walking the walk, and so I did.

For me, this 500-mile goal today marks a special anniversary. In 2011, I took my first steps of a walking regimen on the Friday before Labor Day, which coincidentally was also Friday, September 2nd.  I was determined to get out and get more exercise and get the ol’ ticker revved up, since working from home was just not giving me enough exercise.

I’d say it was one of the smartest things I’ve ever done for myself … and my heart.

The initial trek was just one long block, partly because it was a hot and sticky day, plus I didn’t want to overdo it and risk shin splints. Then, I increased my walking steps each day, adding more streets and entire blocks along the way.  That Winter of 2011 was mild, much like our last Winter, so, I was able to walk most of the season and was pretty proud of myself for that daily journey to the footbridge and back.

On Labor Day 2015, having heard that the Governor accomplished the five-mile annual walk across the Big Mac Bridge in under an hour, I decided that I, too, would accomplish a five-mile trip in 59 minutes by Labor Day 2016. But, I must be a slowpoke, as I cannot even come close to that feat with my feet.

Oh well, I am grateful for the miles walked and the good health to do so.

Last year I walked 718 miles altogether, but, we had such a beautiful Fall and early Winter that I was able to walk more than usual.

Please enjoy the chalk artist’s drawings that I photographed during our local Dream Cruise and have a happy and safe holiday weekend everyone.