Leaning to the left … 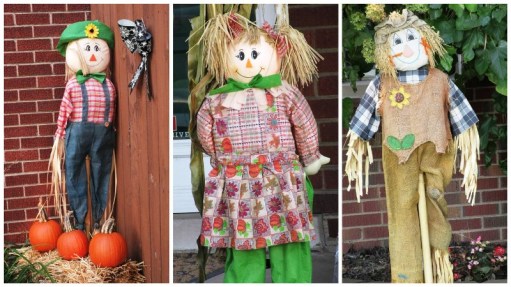 … and backward … and forward too.

No, this isn’t some sort of political commentary. Nor, is it the title to the animated chant we cried out circa 1972, while we cheered on our Lincoln Park High School Railsplitters football team, i.e.:  “Lean to the left, lean to the right, stand up, sit down … fight, fight, fight!”

Instead, it is a description of how the neighborhood Halloween and harvest décor were faring as they were being whipped around by those wicked winds this morning.

I saw a few fake-‘em-out pumpkins somersaulting across the lawns, and more than a few ghosts that had broken free from their tree branches and were floating through the air. Skeleton bones rolled and rattled over porch caps and tumbled onto cement steps or deposited themselves into front gardens.  Those huge inflatable characters were in any number of positions as they bowed down, or reclined lazily, all the while straining on their tethers.

But, it was the poor scarecrows that had been beaten up the most. Their lightweight bodies are either impaled by, or strapped onto, bamboo poles to begin with, then, while those winds blew gustily, just like a day in March, all it took was a short tug to send those straw men and women flip-flopping or flying off their pole.  Straw bits were airborne and the wind wreaked havoc with scarecrow coiffures too, as it began sneaking straw from ribbon-gathered “pigtails”, or knocking jaunty caps askew and long, dry strands drifted across their sweet, smiling cotton faces.

The birds couldn’t even fly straight.

And … unbelievably, it was difficult for this tough bird to walk straight as well.

But, I didn’t turn back and go home, because that warm breeze that was a’blowin’ this morning, was not only a force to be reckoned with, but a chance to bask in Summer-like temps for one more time. It was another day to leave the long sleeves behind and enjoy the warm air on bare arms.  As I walked along, I mused that if I closed my eyes, it could be an August or early September morn, (oh, how a girl can dream …), but, once the eyelids were open again, there was no denying those multi-colored leaves fluttering down to the ground in record numbers.  That was a harsh reality check, and a reminder that this too shall pass, and we’ll return to harsher temperatures all too soon.

I only walked three miles today – these darker mornings have me leaving later, and makes it difficult to get the regular trek done to be home at a decent time to start work, so I have to compromise and take a shorter route.

But, I walked a little slower than usual, savoring the morning and enjoying the month.

“I’m so glad I live in a world where there are Octobers.” ~L.M. Montgomery, (of “Anne of Green Gables” fame)

4 Responses to Leaning to the left …