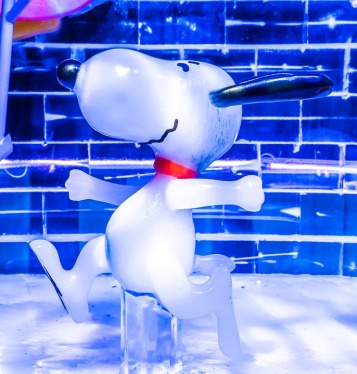 It was back to reality this morning, after Mother Nature momentarily put Winter on ice.

After yesterday’s torrential rain, the temperatures soared to 56, and we broke the old record of 53 set way back in 1882!

I assumed that the ferocious wind overnight huffed and puffed all that moisture away, thus, I was confident that neither black ice, nor snow, would put a stick in my spokes, and I’d be able to walk at Council Point Park.

So, with that destination in mind, I packed a bag full of goodies for the critters. There were bite-sized bagel bits that were surely as hard as my head, but, I figured the geese and ducks could dunk ‘em in the Creek water, plus, a pack of peanuts to dispense to my squirrel pals.  And, after missing that photo op of the ducks and geese on the ice the other day, I also packed my camera.

But, as I set out, I soon discovered that Tuesday’s all-day rain sure took its toll on the sidewalks and streets, leaving muddy puddles everywhere, and, surprisingly, a few spots of snow were still dotting the grass. There was even a thin veil of ice on some sidewalk cracks and the potholes.

So, I failed to throw caution to the wind on this chilly and dismal morning and head to the Park with its perimeter path that is prone to black ice. Instead I opted to go to my usual stomping grounds at Emmons Boulevard and feed those ducks and geese.  At the footbridge, there were just a handful of male mallards paddling along in the ice-free Creek, so it was their lucky day.  Those fortunate few got a lot of bagel bits, and they eagerly grabbed them as they bobbed along in the murkier-than-usual water.

I walked to the railroad tracks and back, the pack of peanuts still stashed in the bag that dangled from my coat pocket. I didn’t stop to tender them to the street squirrels, deciding to save those treats for the Park furry friends instead, since they savor their peanuts more and always show me some love (smile).

I was rounding the cross-street on the last leg of my trip when I saw the substitute mail carrier – I stopped him and asked for Jenny, since I’d not seen her in the ‘hood the past few weeks. He told me she took a nasty fall on someone’s icy porch and had been out for two weeks recuperating. He said “you know that you can’t be too careful with the black ice … you can’t see it, and next thing you know, you’re on the ground.”  Twice, he told me to be careful, and said he had just about wiped out today, a few blocks away in the same neighborhood where Jenny met her fate.  Yikes!

Somebody up there was watching out for me this morning and whispered in my ear to switch destinations.

[Image by Mariamichelle from Pixabay]