… a green and yellow basket.

I was thinking of that childhood rhyme this afternoon while attending the City of Lincoln Park’s annual Easter Egg Hunt over at Memorial Park. I have always wanted to go check it out and it was such a beautiful day, I made sure to get over there.

But, first things first … before I watched Peter Cottontail hopping down the bunny trail, I headed over to my own favorite trail at Council Point Park.

I left later than usual, and, once again it was family time at the Park.

There was a father and son taking what might have been their first bicycle ride together. The dad was perched on his mountain bike, and the young son had his hands in a death-grip on the handlebars of a small bike with training wheels.  I smiled as he rode by, his confidence growing when he managed to give the occasional toot of the bike’s horn (giving the geese some competition for loud noise in the peaceful Park).

Then, a mother-daughter combo were on rollerblades. Clearly, it was the little girl’s first time and her mom was encouraging her to “skate to Mom” – the youngster, with her arms spread out like she would soon take flight, was shuffling along, ever so slowly, on those rollerblades.  I did get a big smile from mom and daughter when I told the little girl she was much braver than I’d ever be, as me on rollerblades would soon become a wet spot on the pavement.

The squirrels were out in full force and rushing to gather ‘round me for their treats, and I was happy to oblige them, as usual. I took some pictures of those peanut pals to use on future blogs – of course, you can never have too many squirrels-on-haunches-with-the-I’m-here-for-the-treats-whatcha-got-for-me look photos.

I meandered along, enjoying the warm breeze, and I ditched the Summer windbreaker I had worn, and tied it around my waist before the first loop was completed.

I next watched a pair of Canada Geese come straight out of the sky and make a rather awkward landing, skidding along the top of the water while honking at one another at splashdown. They were a little unsettled, and continued honking until the water was still, then they swam on like nothing had happened.  They paused to get a drink of water, and I watched the pair dipping their slim necks deep into the murky Creek water, so their entire heads disappeared.  I was waiting to watch them emerge, camera in hand, when a man’s voice called to me “quick, look above at what you are missing!”  I looked up and saw nothing, and, then he said “wait, he is circling – get your camera ready … it’s a big hawk!”  So, I paused and waited awhile, but the hawk did not return.  I ambled on, then thanked him for pointing my gaze upward.  He said “he’s scouting for little dogs, children and squirrels” and I replied “hopefully not any of the ones in that bunch I just fed, because they were so focused on the peanuts, they would not be in tune with the hawk’s presence.”  He then said he was just kidding (but I’m not so sure about that).

But, I kept an eye to the sky and still no hawk. Then, when I was on the opposite side, there he was, a huge wingspan, gliding effortlessly in the flawless blue sky.  How majestic, but I was in the wrong place to get a picture.  There were no shade trees to shield me from the sun’s rays, and with this point-and-shoot camera, all I could see were my glasses, nose and mouth peering back at me.

So, I shot blindly, pointing the camera to the sky and clicking off about six shots.

I continued on my way, and, since I had taken the car for a spin and parked at the Park, I could do two complete loops today. On the second loop, I saw them.  Two of them – a pair of hawks gliding across the sky.  And, this time I was in a better spot, and ducked under a tree and took in their beauty, then got a few pictures.  I wondered if they were mates, as one was much larger than the other, but, I was truly awestruck by the size and the wingspan of those hawks.

After leaving the peaceful Park, I returned home and walked over to Memorial Park for the Egg Hunt. I got there a few minutes before the event began and it was really busy.

They had two large areas staked out by caution tape, to be used according to age groups, and the grass was liberally strewn with colorful plastic eggs.  The eggs were filled with candy and trinkets and the idea was to fill your basket with as many eggs as possible once the event began.

Unfortunately, a few tykes wandered under the caution tape, and began filling their basket with eggs before the event started, so a little hand slapping was in order by the mayor over the loudspeaker. Oops! 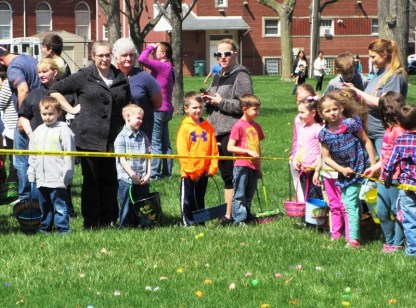 Time was called in mere minutes and the grass was no longer laden with eggs, as they had been scooped up and stuffed into wooden baskets, plush bunny buckets, or even plastic Meijer bags – it didn’t matter what type of container or flimsy bag held those eggs, as I watched the children as they sifted through their cache of colored eggs, admiring each one like it was the finest Faberge egg.

But, the real star of the show was not Mayor Karnes who was emceeing the event, but the Easter Bunny, who waved to everyone, and alternately dispensed hugs or high fives to those who were not intimidated by his presence.

After collecting their eggs, kids were invited to pose with the Easter Bunny and parents stood by, ready to capture the image with their smartphone or digital camera.  Some kids seemed bewildered, or stayed back a few paces while looking like an outburst of tears was imminent; still others were only too happy to snuggle up to the likeable E.B.  I laughed, as did others in the crowd, when one youngster ran up and hugged the Easter Bunny’s knees … well, there’s a warm and fuzzy moment if there ever was one. 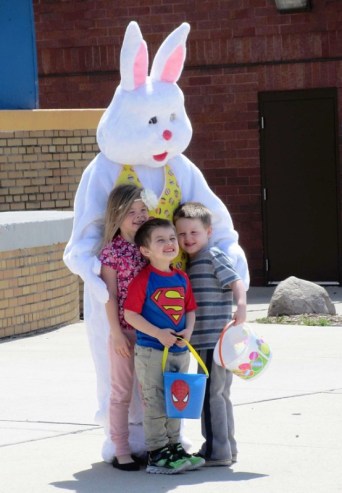 It was a stupendous weather day and the perfect way to start off Easter week. If you’ve never heard the song “A-tisket, a-tasket” you might as well get an earworm like I have and head over here to feel like a kid again: https://www.youtube.com/watch?v=Xb5yuhgKgKc