Birds of a feather.

My boss was in Bay City at a hearing, so, I had an easy morning. I decided to take the car for a spin, then do two complete loops at Council Point Park and drive home.  I knew I had time to linger, so I took extra peanuts, and planned to take some pictures, plus get four miles walked before heading home.

I stepped outside, and, even though I had heard the weather forecast, and didn’t think 47 degrees was all that chilly, I went back inside and got a heavier coat. I knew it would be windy at the Park, so I kept my hat plastered on my head, but had no gloves on.

I got to the Park, and, despite the chilly weather, the same group of people were already on the trail, but, unlike yesterday, they, too, had donned heavier jackets. I thought of the expression “birds of a feather flock together” because the diehard walkers will now be here, every day, come rain or shine, cold or hot weather.  I noticed that the other walkers had either shoved their hands into their pockets, or, like me, had them tucked up under their coat sleeves.  It was chilly indeed, and, as I said, it is often windier at the Park, rather than just strolling through the neighborhoods, especially, as you pass some parts of the perimeter path that have no trees or bushes to keep the wind from buffeting you as you walk along. It was a morning to huddle down in your coat and pick up the pace to compensate for that biting wind, to help you warm up a bit.

I noted that the tree that I mentioned in yesterday’s post was completely down. It had been a huge and sprawling tree and now was reduced to several wide trunk pieces and large branches.  A pile of wood chips were all that remained of the large stump and there was a gaping hole in the homeowner’s backyard.

A flash of white in my peripheral vision caused me to glance to my right, and, through the dead reeds and bushes, I saw a majestic-looking Mute Swan. It was such a beautiful bird that I decided to try for a close-up shot as it glided down the middle of the Creek.  It was difficult to take a picture through the dead reeds, tall brown grass and bare bushes that obstructed my vision.  Plus, in order to take the picture, I had to move fast, before the swan paddled out of sight.  That meant I needed to untuck my hands from their warm spot in the coat sleeves, then unzip my coat to access the camera and take it out of the pouch.  I then walked over the grass to get closer to the Creek bank.  It seemed like I took forever, but I finally clicked off some shots.

I noticed a man walking the path who would soon pass me, and, like the man who drew my attention to the hawk soaring high above my head the other day, I similarly pointed out the swan, who was now semi-hidden in the tall reeds. He said “wow – how beautiful!” and he, like me, stepped over onto the wet and somewhat muddy grass for a better look.  He thanked me for showing him the swan and whipped out a smartphone and took a picture, telling me “I will show my granddaughter this picture of this swan .”

I took about a dozen shots to ensure at least one photo came out, then stepped back onto the trail and continued my walk. When I started on the second lap around, what did I see but the swan, down near the Creek banks,  preening itself and fluffing out its feathers in the sun which was just beginning to filter through the clouds.  One might think that a swan is a pristine shade of white, but its neck was so brown and dirty looking .. well, one look at the murky Ecorse Creek water and you’d know why he (or she) looks that way.

It was a treat to watch that graceful swan. There are always Mallards in the water, and often Canada Geese are floating lazily down the Creek or grazing on the grassy areas in the Park.  In the Spring, those geese and their goslings are famous for stopping walkers as they slowly waddle across the perimeter path.  Then, there are always the smaller birds like Robins, Red-Winged Blackbirds, Starlings or Sparrows that are the usual inhabitants of the trees and bushes along the pathway.  Once there was a large heron – I think he was so old, he fell asleep in that big tree as he never moved from his perch for hours.  But, this is only the second time I’ve seen a Mute Swan at the Park.  I am so glad I glanced over that way. 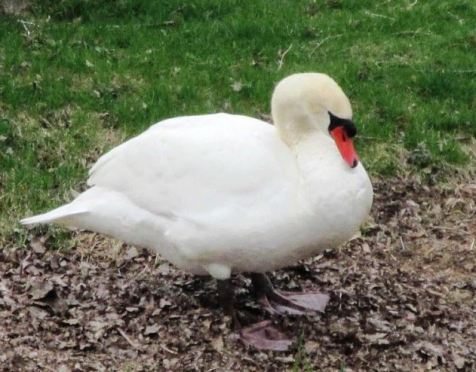 I watched that swan for a short time, then continued on the rest of the figure-eight loop, headed to the parking lot and finally called it a day – as to walking that is. I had added another four miles to my tally and now it is 200 miles walked for 2017 thus far.

4 Responses to Birds of a feather.