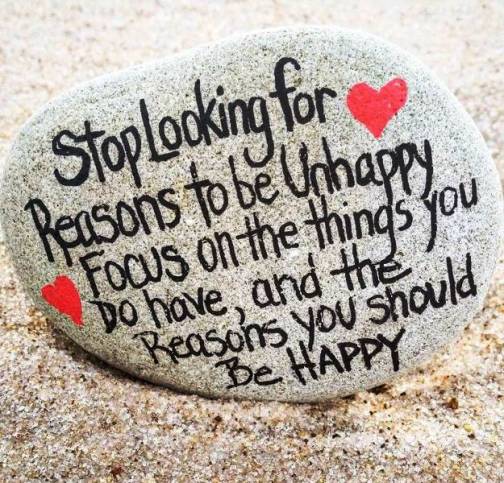 Brrrrrrr. This morning dawned brisk and bright, so that forecast was all I needed to set off on a walk.  Thank goodness the rain has finally departed, probably all week the weather folks say.

Yesterday was devoted to errands and I needed to go to the mall. Though I’ve often popped into Best Buy over the years, I only access that store from the parking lot, so I’ve not been inside Southland Mall in almost a decade.  I figured since it was gloomy and cold, I’d be a “mall walker” and check out the stores, so I got there early before the crowds arrived.

If you plunked me in the middle of that mall, I would not have recognized where I was, although I was a regular shopper at Southland for years. Most of the stores I frequented in the past were gone, and, there were tons of kiosks and stores that I had never heard of.  I wasn’t going to have a Cinnabon  Bakery cinnamon bun, but that store had simply vanished, and, in its place was Pretzel Peddler and Dinky Donuts.  Hmmmm.  How I loved the smell of cinnamon wafting through the mall and up my nostrils when I walked past and the bakers were taking hot cinnamon buns out of the oven.  I did smell a rich roast of coffee brewing and sure enough, I discovered a Starbucks.

Well, the mall walking was great, and, if Southland Mall was closer, I’d probably consider doing it more often, especially if we have a scorching Summer like 2016 was.

But today, it was back to Council Point Park. I knew the squirrels probably missed me since I’d not been there since Wednesday.

I was on a mission of sorts … not just to follow the perimeter path and gain some steps in the process, but to deposit my rock along the way.

There is a new craze Downriver that is called “Downriver Rocks”.   The idea is people paint small or flat rocks with pictures and sayings and then hide them where people will find them.  On the back of each rock is a note to post a picture of this found rock on a Facebook site called “Downriver Rocks” and then you either keep it as a unique paperweight, or hide it again so someone else can find it to make their day.

Downriver is not unique in that there are similar groups in Florida and Washington who started this trend. I asked my friend Evelyn who lives in Richmond, Virginia if they have this craze there.  She replied “no, but we have yarn bombing.”  This is knitting or crocheting colorful huge woolen coverings and wrapping them around tree trunks on a tree-lined city street, or, draping historical monuments in the middle of the night.  That was news to me.

I found out about this new craze just a few weeks ago when I met a pair of women who asked me if I was on Facebook, and, if I had discovered “Downriver Rocks” yet? Melissa and Cheryl were members of the group, which today numbers 1,369 rock fans.  Melissa quickly whipped out her phone, found the site and scrolled down the page, then handed me her smartphone so I could check out what she deemed to be the best of the bunch.   I joined the group that day and it has been fun watching the slew of stones that are painted or bejeweled and ready to be hidden, then watching what stones are found and where.

There are real as well as amateur artists in this rock-painting-then-rock-hiding crowd, so the decorated rocks run the gamut of elaborate and ornate …

… to just plain fun or funky.

It all depends on the size and shape of the rock as to how many polka dots or thought-provoking messages you can fit on that sometimes irregular surface.

There are even painting parties where people pay a small fee to gather and drink coffee, with supplies provided, and they paint to their heart’s content, crafting stones like these. Still others  just collect or buy their own river rocks and painting supplies, then go to town, letting their inner “artiste” surface.  Just as soon as the paint dries, they hide their rocks, then wait … will their creation remain hidden, be found, kept or hidden once again?

I found my first rock last Wednesday at Council Point Park. I rounded the bend on the first loop, and there on the blue metal bench was something round and glistening in the dim morning light.  My curiosity piqued, I went over, and sure enough it was a decorated rock – a little whale.  I wasn’t carrying my camera that morning as it looked like rain, so, I tucked the rock into my coat pocket, then when I got home took a picture of both sides of the rock, and promptly posted it on the Facebook site. 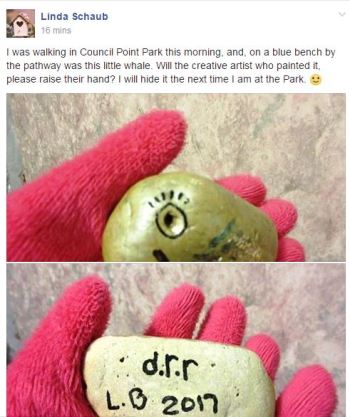 In record time, the “hider” and the “creator” both came forth. It turned out the person who planted this rock is a regular walker in the evening at the Park.  Tami Jacobs found that rock in Wyandotte, where Laurie Bondy, who splashed the initials “L.B.” on the back, originally hid it.  Tami decided to hide it in Lincoln Park this time.

So, today it was my turn to re-hide that rock at the Park, but in a different place, and, I will now await if someone finds it.

Honestly, I thought this time of year I only had to keep my eyes peeled for goslings at the Park, and, now in my peripheral vision I must also scope out rocks along the way. Who knows what one finds hidden amongst the tall grass, dandelions and wild violets … perhaps a witty or whimsical treasure that will make my day.

So, who says a rocky road is just a flavor of scrumptious ice cream or a definition of one of Michigan’s many pothole-laden highways?