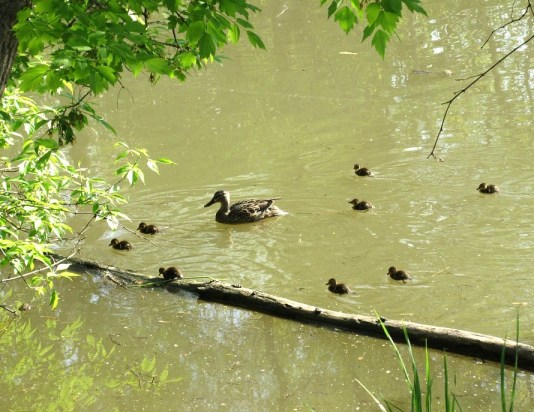 It was peaceful and quiet when I slipped out the door this morning … just pure bliss.

A treeful of birds warbled daintily, filling the air with their sweet song, and there was absolutely NO street noise.

I intended to take the car for a spin to Council Point Park and then walk two full loops. I drove my usual route and soon I had arrived at the Park and started on the trail.

There was only one other person there – Todd, a runner who is there only on Saturday mornings. Several times we passed one another, like two ships in the night, me breathing at a normal rate and he, huffing and puffing as he zoomed past me.

The bright-yellow dandelions have all gone to seed and they were everywhere, standing up straight and tall like soldiers in the field, their wispy heads wiggling slightly in the wind. There were some portions of the grassy areas that have not been mowed, and the dandelions almost obliterated two Canada Geese who were grazing and lazing around there. One goose had dandelions that reached its knees. The head of the resting goose looked eerily like a periscope coming out of the white filmy landscape.

The first lap around the Park was unremarkable, but, the second go-around was chockfull of the magical ambiance that draws me there as often as I am able to visit. By that time a few walkers and bikers were on the perimeter path and there were some Kodak moments to be had – by me anyway.

As I began my second lap around the Park, I was walking parallel to the Ecorse Creek, when I saw a huge mute swan coming out of the sky for a landing on the water. I saw that wingspan, and anticipated the big splash once its massive body hit the surface. I heard the noise and hurried to peek between the trees and bushes to find that swan and get some pictures.

But, surprisingly … that huge bird was nowhere to be found.

Next, I travelled as close to the edge of the Creek as I dared, and still no sign of that mute swan, so I ambled over to the concrete precipice because that open area gives you a great view of the Creek from either direction.

There was no swan.

Well, it was too big to just vanish into thin air, or hide behind some reeds.

But, it was my good fortune, to still be standing on that landing when Mama Duck and a passel of ducklings came paddling out from beneath the precipice where I stood.   They streamed out, one by one behind her, but they were soon scattered all over the place, and the male mallard was attempting to reign them in. I counted eight of those cute ducklings in the picture up top – how about you?

After taking perhaps a dozen pictures to ensure I got at least one or two good shots, I climbed back up onto the trail to resume my walk. I decided that the first loop was a happenin’ place this morning, so I’d walk it again – in fact I ended up walking it three times today. I was bound and determined to find that swan.

Within a few minutes, I discovered some goslings and their parents nibbling on the grass. My, how big and gangly-looking they were … all legs with stubby bodies. I wondered if they were the same five goslings I saw in the water, lined up between the reeds, hugging the Creek bank this past Monday? 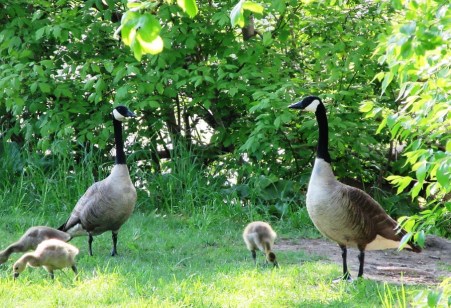 Unfortunately, the family was in a shady area, but the goslings sighting caused a flurry of picture-taking nevertheless. They moved around continuously and within a few minutes, had finished grazing, and toddled after their parents down the hill, behind a tree, and out of my view. 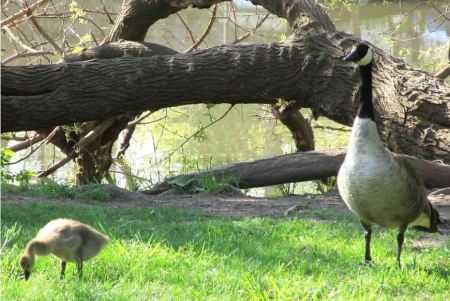 Timing sure was paramount this morning.

I continued on my way and soon had a pair of squirrels waylay me. They had both scurried over to my feet, one approaching each shoe, clearly trying to get my attention with the mindset “perhaps if we climb over her shoe, she’ll feed us some peanuts?”   I realized then I was remiss in paying attention to my furry friends, since I was busy investigating water fowl, so, no doubt the squirrels were miffed at my lack of attention. I made up for my faux pas by offering extra peanuts and this pacified them, so there were a few more photos taken, and off I went once again.

When I was finally done with my steps on the perimeter path, I walked to the car so that I could drive home. When I pulled into the driveway, I heard music that was much louder than all that horn honking earlier in the day, when I disturbed the peace and solitude momentarily after my car alarm launched all on its own.  I craned my neck to see where it was coming from. In the next city block up, there were members of a marching band, dressed in Lincoln Park High School’s colors of orange and blue. They were playing excerpts from Queen’s “Bohemian Rhapsody” and Gary Glitter’s “Hey Song”. They even played the fight song for LPHS which I haven’t heard since the last home football game I attended circa Fall of ‘72. Maybe they were getting ready for next Sunday’s Memorial Day Parade.

My Saturday stroll was perfect in every way; glad you could tag along with me today.