Today was my first 5K event!

Even though I walk about four miles daily, participating in a 5K event was on my bucket list for awhile.

So, when I saw the Lincoln Park Schools Education Foundation Second Annual “Rails Rally” Run/Walk advertised on the City’s Facebook site, I decided to sign up. After all, the event was being held at my favorite stomping grounds, Council Point Park.

I registered way back in March, and, when I got the e-mail this week showing a map of the route and registration information for event day, I started getting excited about it.

Though it was a picture-perfect day, it was a tad hot, and I wished we would have kept those cooler temps awhile longer.

The crowd was excited and milled about the big rock at the entrance of Council Point Park as they waited for the official start time.

A whistle blew to start the event at 9:00 a.m. sharp, and,the runners, who were up in front of the walkers, broke the blue ribbon and were off.

The contingent of walkers was not far behind them.

The route for the run/walk began at Council Point Park, then followed a one-mile tour in the neighboring streets, then back to walk both loops at the Park. In the ‘hood, it was already bright and sunny, and, many people waved and cheered us on as they sat on their porch enjoying their morning coffee.  Water stations along the way were manned by volunteer ROTC students and it was an excellent way to down a Dixie cup of cool water, and be on your way again.

I had already decided that I was in this event to sponsor a good cause, and attend merely for sport and not competition. I had the mindset that I’d “take it all in”, get some photos and just kind of meander along enjoying the ambiance.  I figured I’d need to stop to feed the squirrels, but they must have been fearful of the crowds and the noise, and never came down from their trees.

I therefore soon began lagging behind as I ambled along taking some pictures and chatting it up with several nice women who were retired teachers and one was a principal. I later connected with a long-lost neighbor and caught up on old times.

At one point I turned around and saw a policeman, whose vehicle was following close behind the stragglers, and, as I walked past the car’s open window, I said “I walk four miles every day – how come I am so behind Officer?” to which he very politely said “guess it is because you are taking pictures Ma’am.”

It was not just two-legged participants at the “Rails Rally” as there were quite a few four-legged participants as well. One runner had her two large dogs with her, but she kept stopping to mop her brow with a towel or give her canine companions some water from a portable bowl. 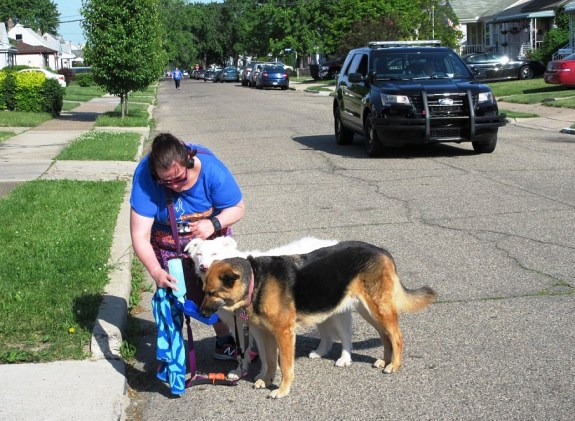 This poor dog looked hot and tired and just too pooped to participate. 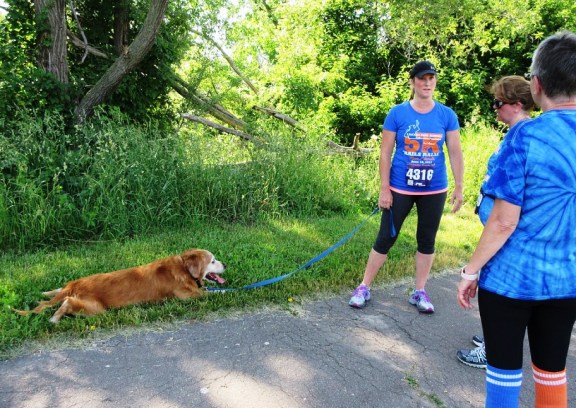 As people neared the finish line, even the walkers broke into a sprint to cross. On the digital counter, my information said I did the 5K in 54 minutes.  Not stellar stats by any means, as I usually get four miles done in that time, but I had already walked from home so that added another 3/4s of a mile to my morning walk.

It didn’t matter how late you arrived at the finish line, there was handclapping, and you were directed to the pavilion area for bottled water, bananas and apples. 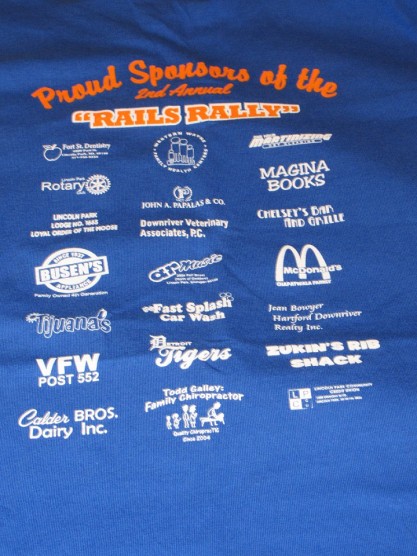 Miles and smiles were our reward for participating in this walk to raise money for the Lincoln Park Schools Education Foundations, and I will look forward to the third annual event next June.

4 Responses to Miles and smiles …