Friday’s soggy start wiped out my morning walk.  The sun eventually put in an appearance, right around the time I logged in at work, then we got another dose of stormy weather around dinnertime.

Oh well … there will be nicer, and more-temperate, days to get my steps done … like today.

Now, this morning was just glorious, and I wanted to linger at the Park, rather than scurry home to have a snack and get hydrated before traipsing back down into the basement.

I began my day with a few stretches, hoping to thwart that stiffness that resulted from last weekend’s marathon session of decluttering downstairs.

From the pictures featured in this blog post, it appears that I was not the only one incorporating some exercise into the a.m. routine.  On the second loop of my tour around Council Point Park, I heard a rustling noise near the top of this tree, so I glanced upward.  Obviously, my inquisitive peanut pal saw me coming, thus he had to hustle to get down to ground level before I walked on by.

After I looked up, first a staring contest ensued.

Through the branches, I saw a pair of dark eyes, and, at first this squirrel was very still and quiet, except for that twitching tail.

I pulled out the Ziploc bag of peanuts, shook it, then told him to take his time, and he did just that.  I watched him carefully navigating his way down the tall tree, gripping the bark, or precariously dancing along some skinny branches, and deftly grasping onto other twiggy shoots with his sharp claws.

Sigh … all the stretches in the world would still not leave me as nimble as my furry little friend.

A couple of times he glanced my way as if to say “I’m gettin’ there, just gimme a few more minutes, okay?” 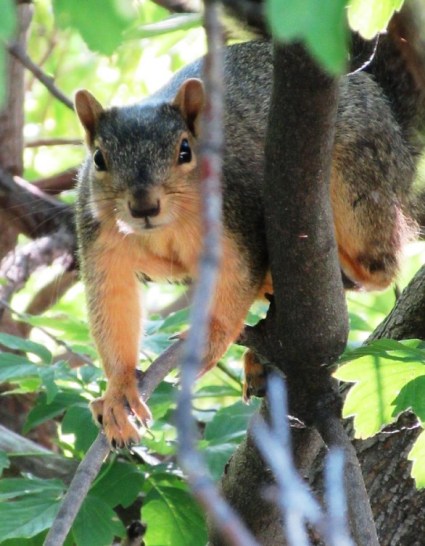 He finally joined me on terra firma and I spread out five peanuts for him to enjoy.  Like many of his brethren, he hesitated a second, figured he’d take some to go, then return for the rest later.  I watched as he picked up two peanuts, clasped them firmly between his sharp front teeth, then raced away to hide them.

I know that peanutty treat did double duty … it made his day and it gave me a photo op to share with you as well.