As luck would have it … 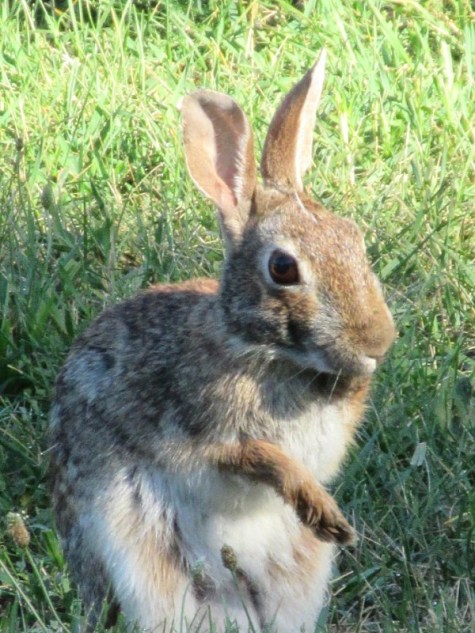 I’m not a betting woman, nor am I a meteorologist, but, I could have predicted the recent morning bouts of sloppy and stormy weather.  After all, the Wyandotte Street Art Fair began on Wednesday morning.  This annual event always gets at least one or two days of wet weather, or wicked winds, that threaten to wreak havoc on vendors’ booths, driving the crowds away until it clears up again.

Perhaps I am feeling extra lucky that we dodged that severe weather bullet that was predicted for overnight Wednesday.

Or, I am feeling fortunate that we missed that proverbially unlucky “Friday the 13th” by one day.

And today, luckily there was no rain to spoil my morning routine, though the heat and humidity still continue to linger.

As I rounded the bend on the perimeter path, I saw this big rabbit at Council Point Park.  He looked up, but was content to nibble on some long grass, and did not bolt away, even though I was in close proximity to him.  I got the camera out, and suddenly he stopped eating and stood upright on his haunches and leisurely began to groom himself.

Fearless, he looked at me a few times, then continued on, much like a cat would conduct its personal hygiene routine, slowly along each paw, even extending it out as I watched. 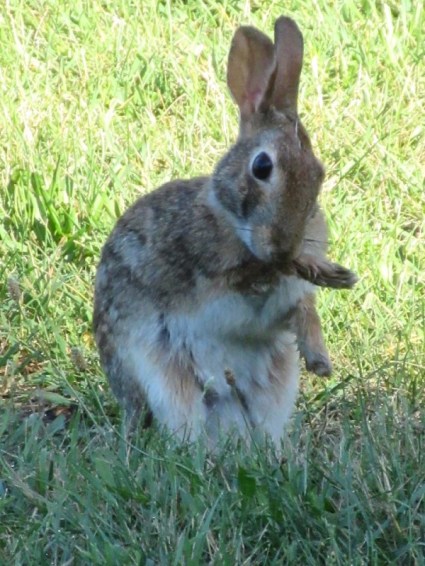 This rabbit was neither shy nor scared.  He finally finished, then this now-beautiful bunny nonchalantly went back to enjoying the Park grass once again, so I moved along on my journey.

As I was walking, I was musing over the rabbit’s cleansing ritual, and clearly remembered seeing him extending one long front paw.  That triggered a memory of a ratty old rabbit’s foot I used to have when I was a kid.  I remember it was on a chain and I had a couple of keys on the chain, probably old ones that belonged to my parents.  As I think about that “lucky rabbit’s foot” as it was termed, I wonder why anyone, including me, would want to carry around a foot of a dead rabbit, complete with toenails?  I have to say that very idea now disgusts me.  As I ambled around the perimeter path, I struggled to recall who even gave me the rabbit’s foot, or what became of it.

Funny, seeing that big rabbit made me dwell on that lucky rabbit’s foot, something I’ve not thought about, in at least a half century, if not longer.

Did you ever carry such a good-luck token around?

Back in 1973, my mom, a devout Catholic, gave me a St. Christopher’s medal to put into my very first car.  She told me St. Christopher was the patron saint of travelers and would keep me safe from harm while I was travelling in the car, so that good luck charm has been aboard since the very first day I ventured out on the road on four wheels.

4 Responses to As luck would have it …