When I left for my walk, there was a stiff breeze and the sun was slowly filtering through a dark and dappled sky.  I even hesitated when shutting the door, since a quick glance at that gray sky gave me cause to pause whether to lug along an umbrella or not.  I opted to be an optimist, but, in retrospect, I could have used that umbrella on the trip home, since a bird behaving badly decided to use my clothes as target practice … if you know what I mean.

The cooler temps and breeze sure felt good, and I even had a few goosebumps as I wended my way down to Council Point Park.  Within a few minutes after my arrival, the sun suddenly put in a commendable appearance and the entire sky lit up in just a matter of moments.

Several times the subject of birds has crept into my Monday.

I saw that as a “sign” of sorts, so I decided today’s blog post topic would be about bully birds.

Last night, after I shut down my computer, my friend Marge sent me a video which I viewed early this morning.  That video was about “Canuck the Crow” who is terrorizing Vancouver, B.C. with its scary antics.   In one neighborhood, the mail can’t get delivered because Canuck dive-bombs to peck the mail carriers.  He also likes to swoop, then swipe food, and otherwise enjoys disturbing the peace at Mickey D’s … hey, this critter is fond of French fries.  Canuck is full of swagger and strut and his antics are well documented.  He even has a Facebook page and a Twitter handle, or you can read about him here:   http://www.ctvnews.ca/canada/canuck-the-crow-causes-kerfuffle-at-vancouver-mcdonald-s-1.3478270

I commented on Marge’s post that now I had to worry about pesky crows, just like Pit bulls, when venturing outside.

Many years ago, the neighbors across the street had a family of Blue Jays living in one of their tall maple trees.  We loved watching those brightly colored Jays weaving in and out of the trees and flying around the neighborhood.  But, one day, a bald-headed man passed below that maple tree where the Jays had built a nest which was filled with little ones.  The male Jay suddenly swooped down, and pecked the man’s head with a vengeance.  This gentleman had blood dripping from his head and fell to the ground.  Someone called for help, EMS arrived and whisked him away.  What provoked that Blue Jay to wage war so savagely on this poor man who merely walked down the street?  It is anyone’s guess what threat that Jay perceived.

I like birds – don’t get me wrong, even if one ceremoniously left his droppings on me while I was walking home from the Park today … no, I wasn’t amused.

Thinking about these two wild and wily birds and my little “incident this morning propelled me to expound on the story about the Red-Winged Blackbird at the Park, who tends to get a little too big for his britches sometimes.

First, this bird is fearless.  While the other Red-Winged Blackbirds are content to sit in the trees or atop the bulrushes, and you hardly know they are there, that is until you hear their loud and unmistakable call, this fellow is about as cantankerous as the Canada geese.

People can identify Canuck the Crow because he has a bright-red tag on his foot, so, I know you may be thinking that I am merely guessing it is the same Red-Winged Blackbird who not does not discriminate from bullying the squirrels or the Canada Geese.  No, I recognize this bird who is a small and mighty force to be reckoned with at Council Point Park.

When I scatter peanuts along the path and this bird sees me, he does this swoop-and-scoop maneuver wherein he places himself in the center of the peanuts, grabs what he wants and flies away.  The squirrels are flabbergasted since it happens so fast, but, if he lingers, they back off and wait, because they know this bird is not greedy and won’t come back for seconds.

However, on a walk along the perimeter path in late May, I witnessed this Red-Winged Blackbird, who, from his perch on a tree branch in the marshy area of the Creek, got irritated with the goose family who paraded through the tangled grassy area as they returned from paddling in the water.

I watched his demeanor change in the course of a less than a minute’s time.

He went from downright mean and ornery (as pictured above), to opening his sharp beak … 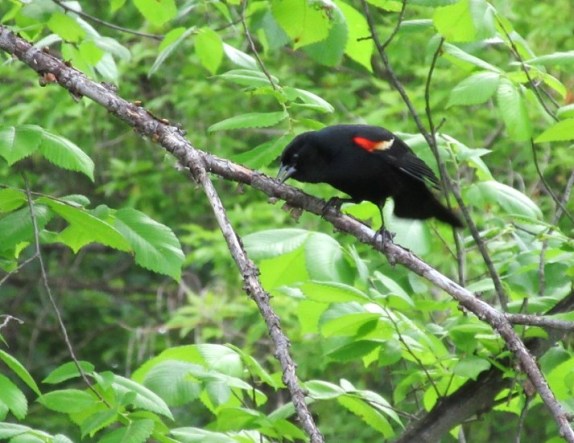 … then pointing his whole body down in “attack mode” and then he swooped down on the hapless goose.

That blackbird began to attack the lead goose, probably the male, who was simply guiding his little family to land from the water’s edge. 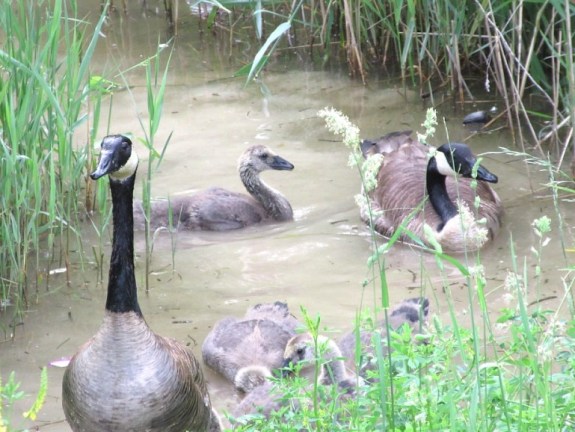 He pecked mercilessly at that Canada Goose, who in turn waged some histrionic behavior of his own, hissing and wing-flapping to bat that blackbird away.

The Red-Winged Blackbird returned to his tree where he sat, clearly all puffed up with importance. 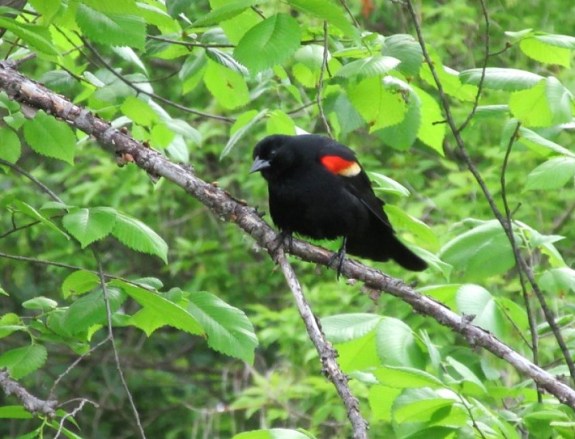 Here, he rested with a few minutes, then zoomed down, once again landing onto the back of the goose, aggravating it even more.  Though I was initially fascinated with the interplay, I then put the camera away and left the scene, as it looked as if it was every bird for himself and I didn’t want to witness a bloody massacre.

This Red-Winged Blackbird is about as feisty and gutsy as Canuck the Crow.  Whether walking down the street, or venturing into the nature nook, I now know I have to watch my back for more than one reason!