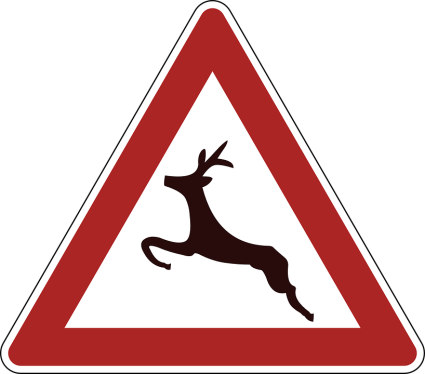 Who didn’t enjoy the story of  “Bambi” when growing up?  I loved that book and the movie too.  Come to think of it, there never seemed to be a shortage of wonderful animal stories and movies when I was a youngster.

I’ve never outgrown my love of animals, and every so often I’ll crack open one of my worn and dog-eared pocketbooks in the series written by British country vet James Herriott about his life’s work with animals, just because it will give me a smile.

I don’t remember if the good doctor treated any deer in his practice, but he was a country vet and so he might have fixed up a few cloven-hoofed critters, besides cows, in his day.

I know I’ve used this photo before in one of my earlier blog posts around deer hunting time.  The picture was taken at Algonquin Park in Northern Canada, when I was six years old.  I’d probably get just as big of a kick feeding a deer today as I did back in 1962. 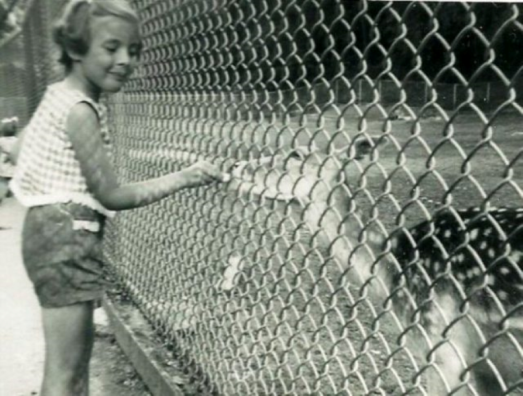 On most of my excursions to Council Point Park, I’m sure to find some water fowl, songbirds, a passel of squirrels, even a line of turtles flipping into the water or sunning themselves on a half-submerged log.  Then, there are the occasional oddball sightings like gophers, herons and mute swans.  Last month I saw a raccoon, but that was a first, and, apparently it was the last time for that raccoon as I’ve not seen it since.

When I first began walking at the Park in 2013, I was speaking with an avid runner named Todd, who told me he had been running at the Park every weekend for over a decade, and he described the wide variety of critters he had glimpsed at that venue, among them a coyote, and a red fox.  I told him I’d be sure to always have a camera on hand to capture an image of them.  Coyotes and red fox have not appeared yet, but I am hopeful.

The latest unusual critter at or around Council Point Park is a deer.  On the local crime reports on Facebook, (which often report accidents as well as crimes), there have been four different deer sightings in and around our city, including down at Council Point Park.  Sadly, all four now have a dearly departed status after they appeared out of nowhere, and then sprung across busy Dix Highway and/or Fort Street.  There was a deer last Summer near my street, and last week, another one lost its life, just two blocks away.  Believe me, I do not live in a rural area, but now have to keep my eyes peeled for deer as I tool along Fort Street while I give the car a run, and also every time I walk.  At Council Point Park, while there are an abundance of bushes and trees along the Ecorse Creek, that venue is not what one would define as a densely wooded area.  So, I don’t know the reason for all the deer frequenting the Downriver area these days, but hopefully if I see one, it is in a natural setting and not in danger on a busy highway, because that would break my heart for sure.  Deer coming out of the woodwork, not the woods, is both a scary and sad situation.

On a lighter note, I’ve wanted to incorporate these photos that my friend Carol posted on her Facebook page back in April, into a blog post, and today I am going to do so.  Carol lives in Honeoye Falls, New York and her backyard is on the fringe of a wooded area.  She gets lots of woodland critters, including deer. 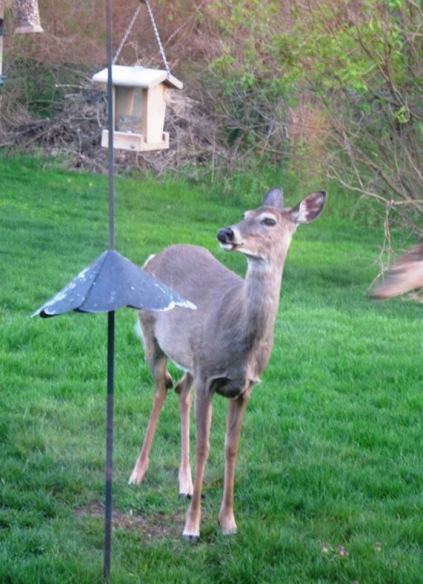 … and then, the next minute that deer decided to “go for it” while a “friend” patiently waited its turn in the background.  The baffle, designed to keep the squirrels from clambering up the pole to feast on the bird seed, didn’t deter the deer one bit and Carol’s quip accompanying the post was “we have a visitor making herself (?) at home in the back of the yard.”

A little later, Carol took a photo of a deer having a little nap after eating all that bird seed, and commented “there were three more sitting in the shade under the trees between my yard and the neighbor’s.”  It might have been delightful the first time Carol saw the deer gathering in her backyard, but after they repeatedly stripped her berry bushes in record time, the beautiful deer in the idyllic setting became a little less enjoyable.

Today, since it was a weekend and there was no reason to scurry home, I would have liked a long, leisurely walk, but five minutes after I set out, it started to rain … likely tomorrow’s walk will also be spoiled by Mother Nature who has now worn out her welcome with the rain.

[Image from WikimediaImages on Pixabay]

26 Responses to Oh deer me!