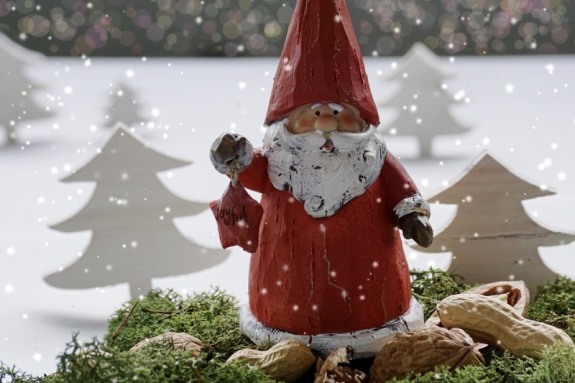 This morning I was ready to hit the ground running … but Mother Nature stopped me in my tracks.

Oh, I had heard all about that dusting of snow in my neck of the woods, but, I really wasn’t sure just how much snow had twinkled down, until I peered out the door.  Wow!  Mother Nature did an admirable job, in a short amount of time, making it look as if she took a sifter full of icing sugar and gently shook it over the landscape.

Admittedly, that snow was pretty and festive-looking, as it clung to trees and bushes while the flakes continued to drift down.  That dusting of snow wreaked havoc on the roads, with scores of accidents, and once the snow left Downriver and ventured elsewhere, a woman in Ann Arbor went around the bend too quickly and her vehicle plunged right into the Huron River.  Oops!  She was okay – the car not so much.

The slip-and-slide factors and those furiously flying flurries made it an easy decision to hang out in the house a little while longer.

Within a matter of hours, however, this nuisance snow had stopped, and magically the concrete and roads were clear, though the fresh coating of snow still remained on the lawns.

I suited up and booted up, then hustled down to Council Point Park before the snow decided to make a return visit.  There is already a lot of chatter about the Christmas Eve snow event and now the prediction is one to three inches of holiday snow to give us a white Christmas.  The result is it will require shoveling, cause slippery roads, no doubt be iffy for walking, and, as I said a few blog posts ago, I’d rather have a dry, green Christmas, instead of a sloppy white Christmas.

I arrived at the Park and no walkers were there – perhaps everyone was at the grocery store or mall on this Super Saturday.

The path was fairly clear, a bit damp from the earlier snow, but it was not slippery.  The fresh covering of snow in the Park was pretty and looked picturesque, contrasting nicely with the tall evergreens, with the white crystals still decorating their boughs, plus it made it easier to spot the squirrels … though truthfully, I think they spotted me first.

With my pockets bulging with peanuts, I must admit I felt a little like Santa Claus dispensing gifts to the little ones.  But, no elves, or even Mrs. Claus, needed to be present for this close encounter of the furry friend kind.

I headed home with rosy cheeks after enjoying my chilly walk, having added another five miles to my total.

[Image of Santa by Suju from Pixabay]

4 Responses to I arrived bearing gifts.