Hold onto your hats everybody!

Just like everything else this Winter season, Mother Nature has done nothing in moderation, and today was no different.

After still more rain last night, we started the day off rocking and rolling with 40 mph wind gusts.  I knew before I went to bed last night that a morning walk was not in the cards.  It is all open spaces at Council Point Park, especially now with the bare trees and bushes.  So, I bided my time to avoid a “Toto, I’ve a feeling we’re not in Kansas anymore” moment.

Finally, at 11:30 the wind subsided a bit and I headed out.  Though the wind was about 20 mph, gusting to 25 mph, because I am bullheaded, I was not going to pass up a sunny Sunday just because of a little wind.  I used the big tree across the street to gauge the wind velocity; it was bending and swaying a little … “a little” being the operative words here.

Before leaving, I secured my chullo hat by safety-pinning the straps to my turtleneck sweater as I didn’t want to be chasing it along the perimeter path once I got down to the Park.  As long-time subscribers to this blog know, I’ve had one woolen cap blow off and I chased it down the street as it somersaulted along ‘til it hit a murky-looking puddle.  Still another woolen hat went airborne, sailed over the water and snagged onto a gnarly old tree that bends across the Creek, so it now belongs to whatever critter, probably a squirrel and his missus, who likely use it as a cozy blanket to line their nest all Winter.

Speaking of nests, it amazes me just how solid and sturdy those critters’ nests really are, from the tiniest bird nest in a sapling … 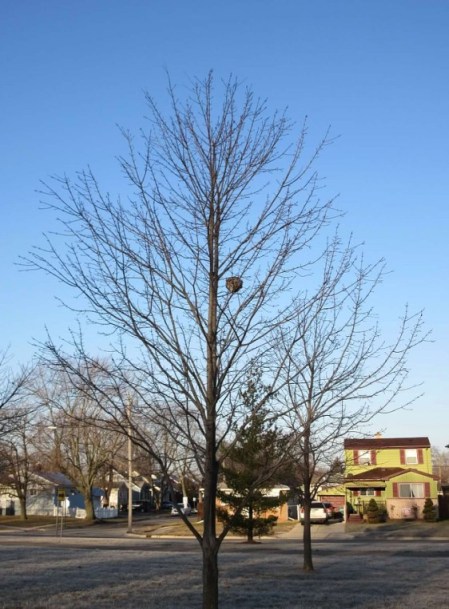 … to a squirrel or crow’s nest atop the tallest tree.  The wind may blow and blow, and those nests always stay put.  Very rarely do you see a nest that has tumbled to the ground.

I know all of you are dying to know if the “creature” was still hanging from its tail up in the tree.  I must confess it creeped me out so much yesterday, and, given the gusty winds today, I avoided that part of the perimeter path, and instead made a detour through the grassy area and later connected to the trail.  Okay, call me a scaredy-cat, but I was not having a rodent, suspended by its tail from a thin twig, drop to the ground during a big gust of wind.  What if it landed on me?  I have enough worries when the geese do a flyover and I am bareheaded.  I always hope they miss me … if you know what I mean.

Tomorrow, when those winds are much calmer, I will stray back over to that tree again.  I still want to know why a predator bird did not see the rodent and take it “to go” … I hope to find it gone tomorrow.

Today, the squirrels remained tucked in their nests, even Parker.  I wonder why?  Perhaps they are afraid of shimmying down the tree trunk when the wind is so gusty?  Or, perhaps the two men who also feed the squirrels arrived earlier than me.  I was the only person on the trail today and much later than my usual time.  I left some peanuts on the picnic table as a sign of life that I’d been there.  The wind shouldn’t push them off the table top as there are ridges and grooves between the wooden boards to line them up.

The  mallards were not bothered by the wind at all, except those ruffled feathers from a particularly gusty puff of air, or, from a fellow mallard who swam too close and infiltrated their brethren’s personal space.  Loud quacking then ensues.  The geese were similarly a no-show, and the old heron I believe was tucked away somewhere, evading me as he believes I’ve become too intrusive with my picture-taking of him lately.

I got four miles done today, some steps by my own two feet, and still others as I rolled like a giant tumbleweed along the pathway.

This is my first blog and I enjoy writing each and every post immensely. I started a walking regimen in 2011 and decided to create a blog as a means of memorializing the people, places and things I see on my daily walks. I have always enjoyed people watching, and so my blog is peppered with folks I meet, or reflections of characters I have known through the years. Often something piques my interest, or evokes a pleasant memory from my memory bank, so this becomes a “slice o’ life” blog post that day. I respect and appreciate nature and my interaction with Mother Nature’s gifts is also a common theme. Sometimes the most-ordinary items become fodder for points to ponder over and touch upon. My career has been in the legal field and I have been a legal secretary for four decades, primarily working in downtown Detroit, and now working from my home. I graduated from Wayne State University with a degree in print journalism in 1978, though I’ve never worked in that field. I like to think this blog is the writer in me finally emerging!! Walking and writing have met and shaken hands and the creative juices are flowing once again in Walkin’, Writin’, Wit & Whimsy – hope you think so too. - Linda Schaub
View all posts by Linda Schaub →
This entry was posted in Uncategorized and tagged nature, walking. Bookmark the permalink.

14 Responses to Hold onto your hats everybody!