Only one more “sleep” until Santa arrives here in North America.  For some of my blogging pals, Santa has visited and left, like for John in Sweden, where Christmas is celebrated on December 24th.

Christmas was so much more fun when you believed in Santa Claus.  The first time I saw the Jolly Old Elf, I was just 8 months old.  My parents took me downtown to Eaton’s or Simpsons in Toronto to get my picture taken with Santa.

When I was a little older, I’d get bundled up to go downtown with my father.  We’d make a day of it.  We’d watch the Eaton’s Santa Claus Parade, visit all the animated displays in the storefront windows, then head over to see Santa Claus.

The visit with Santa was the most important stop of the day, because I had already written to him and I’d want to ensure he got my letter and would bring that coveted dolly or pram.  Here I am sitting in the Big Man’s chair while he was on break … yes, the anticipation for our visit was just killing me!

The last time I saw Santa Claus was Christmas 1985.  No, I wasn’t there to sit on his knee and ask for a dolly that time.  We had driven to Toronto to celebrate my grandmother’s 80th birthday in mid-November.  A few weeks later, a concerned neighbor of hers contacted my mom and said “Minnie’s not looking too good, she’s so pale and seems weak – perhaps you and Linda should come over to see her at Christmas.”  My mom was surprised at this and said “we were just over there for her birthday.”  After she hung up, my mom called my grandmother and asked how she was feeling.  “I’m okay” was the answer.

But that phone call from the kindly neighbor was still worrisome.

I don’t like driving in Winter, and because I took the bus to school and work for decades, and now work from home, I’ve never had to sharpen my Winter driving skills.  However, Christmas 1985, according to the weatherman, was promised to be clear and dry with no snowstorms, so Mom called my grandmother and said “we’re coming for Christmas to see you” and off we went two days later.

It would be the last Christmas we spent with my grandmother as she passed away the following month.

My grandmother only had a few days to plan for our visit.  She would not be bustling around, especially as to food preparation, so …  it didn’t matter if we gave her a month’s notice, or a day’s notice, … we would either dine on pot roast or ham … most likely ham.  It was always a joke in our family that anyone going to visit Minnie could always count on a hug, a kiss and a ham sandwich.  There was always a ham in the fridge – as soon as you walked in the door, the kettle was filled to make a pot of tea and out came the ham and a loaf of bread and the sweet butter to soften up.  A few thick slices of ham, a dab of honey mustard and you were handed a sandwich, so you were all set.  In the sweets department, there was always a package or two of butter tarts, a Canadian staple, tucked away in the fridge.  It was always this way, whenever we visited my grandmother.  That Christmas, my mom would supply extra sweets, after she raided our cookie-filled canisters – we weren’t going to be home to eat them anyway.

My grandmother grew up on a farm in Ariss, Ontario.  It was a rural town near the bigger city of Guelph.  She had eight siblings.  Through the years, my grandmother would recount how every Christmas Eve, a local farmer would dress up like Santa and go from farm to farm, distributing toys to all the kids.  Their parents had already visited “Santa” (a/k/a George Moro) in advance, with the wrapped presents for him to produce at his visit to their home.

That tradition continued long after my grandmother and her siblings moved out, married and started their own families.  They would return to the farm every year at Christmas and a much-older George Moro would still arrive bearing gifts.  My mom and grandmother both said it was a fond memory of their Christmases growing up and I even heard how my mom, once she got a little older, turned to George Moro one time and said “you’re not Santa; you’re George Moro!”  My grandmother rushed the precocious Pauline out of the room, and she got a lickin’ and when asked why she said such a thing, my mom simply said “I recognized his laced-up high boots and he always smells of liniment!”

That was one of those stories that was told, and retold over the years.  Many times I’d turn to my mother and grandmother and say “how come we never had a George Moro – you know … one of those kindly neighbors that dressed up like Santa and came to visit on Christmas Eve?  I feel I had a deprived childhood!”

Well, for Christmas 1985, my grandmother may not have done much in the meal preparation department, but she called in a few favors and arranged for a visit from Santa’s family on Christmas Eve.

We had finished our Christmas Eve dinner and treats and were sitting in the living room complaining how stuffed we were, when a knock came at the door.  My grandmother sent me to answer it.  It was dark outside, so she warned me “Linda – don’t open the door unless you know who it is!”

The “knocker” was none other than Santa Claus, accompanied by his Missus and an Elf.

Forgetting all about safety, not to mention the fact that only women were in the house, and, without a care in the world, I flung open the door and said “well, c’mon in!”

So, Santa and his sidekicks strolled into the living room.  My grandmother had her usual Christmas decorations up and I had indeed noticed a sprig or two of mistletoe.

Well, Santa honed right in on that mistletoe.

Good thing Mom or Mrs. Claus grabbed the pocket camera to get some pictures. 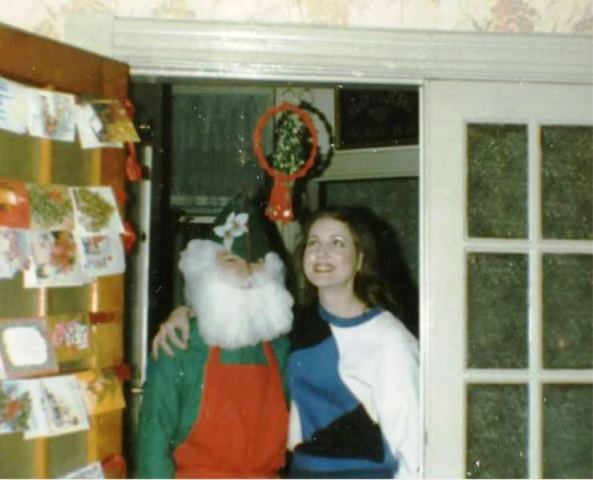 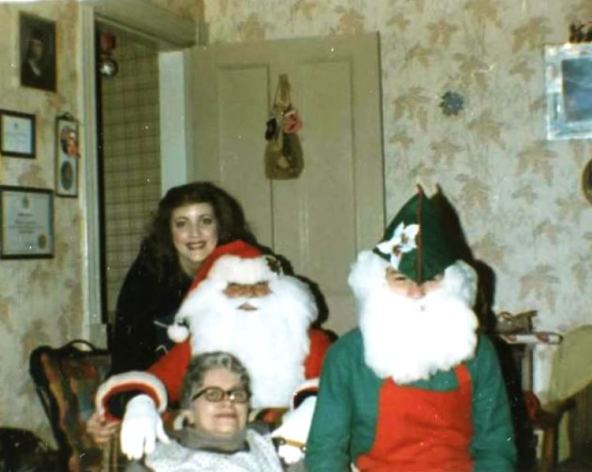 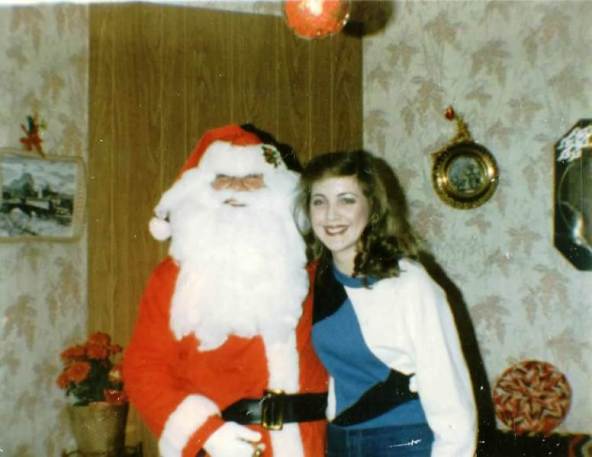 So, there you see it – evidence of my first and last visit with Old Saint Nick.

I’ve got a moral dilemma.

So, last week I did a lengthy post about Christmas cookies past and present, while mentioning some of the cookies Mom baked every year. Well, I’ve been nibbling away on those Archway and Pepperidge Farm cookies, and this morning my good friend Ann Marie dropped off two plates of homemade Christmas goodies:  kolaches and candy cane cookies. 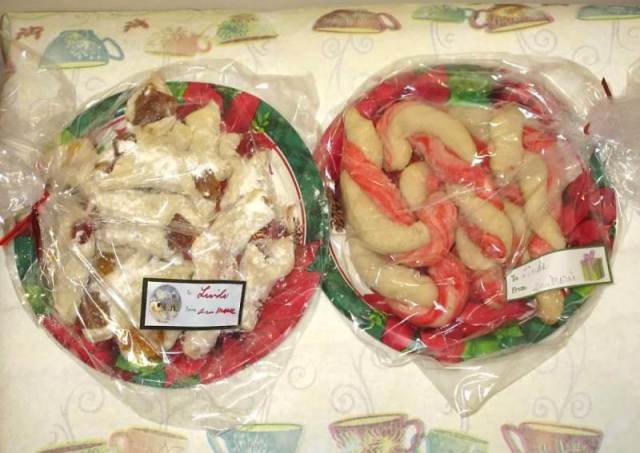 Aah, candy cane cookies … long the staple of my childhood and beyond, and I had just written, even dreamed about, the sweet memories I attached to those candy cane cookies.  And here they were again, sitting there, just waiting for me to indulge in them!

So, here’s my dilemma.  Tonight before I go to bed … do I leave out a plate of the store-bought cookies, or do I leave Santa some of Ann Marie’s scrumptious treats?

I really hate to part with the good stuff, but he IS Santa after all.

This is my first blog and I enjoy writing each and every post immensely. I started a walking regimen in 2011 and decided to create a blog as a means of memorializing the people, places and things I see on my daily walks. I have always enjoyed people watching, and so my blog is peppered with folks I meet, or reflections of characters I have known through the years. Often something piques my interest, or evokes a pleasant memory from my memory bank, so this becomes a “slice o’ life” blog post that day. I respect and appreciate nature and my interaction with Mother Nature’s gifts is also a common theme. Sometimes the most-ordinary items become fodder for points to ponder over and touch upon. My career has been in the legal field and I have been a legal secretary for four decades, primarily working in downtown Detroit, and now working from my home. I graduated from Wayne State University with a degree in print journalism in 1978, though I’ve never worked in that field. I like to think this blog is the writer in me finally emerging!! Walking and writing have met and shaken hands and the creative juices are flowing once again in Walkin’, Writin’, Wit & Whimsy – hope you think so too. - Linda Schaub
View all posts by Linda Schaub →
This entry was posted in Uncategorized and tagged Christmas, Christmas cookies, Christmas Eve. Bookmark the permalink.