When I stepped out the door this morning to leave on my walk, it was downright chilly. I glanced over at my neighbor Marge’s big thermometer and it was a double nickel degrees … 55 on the 3rd of July! Glad I decided to wear my sweat suit today. Beyond the thermometer that hangs on the side of the deck, I could see the new swimming pool in her yard – it hasn’t seen much activity yet this Summer between the rain, chilly temps and the incessant mosquitoes. For sure, this pool will see no skinny dippin’ action today.

I decided a trip to Council Point Park was in order and as I began my road trip, I started at mile #201, having racked up nearly 4 miles yesterday while grocery shopping. Too bad that I set my sights to be at the halfway point of my 500 yearly miles by the 4th of July. I fell short of that lofty goal for sure. But onward I’ll tread and hope for the best.

It was sooooooo quiet as I walked through the neighborhoods enroute to the Park. The big trek northward started mid-afternoon yesterday and continued long into the night. There wasn’t even the hum of an A/C unit since everyone was enjoying the cool fresh air.

It was equally peaceful at Council Point Park, and I arrived so early that I didn’t see a single soul until I was on the second go around, and then I didn’t recognize any of those walkers. Camera in hand, I left the trail to walk to the water’s edge after I heard a few plops and saw the still water shimmying with concentric rings that remained after a few spectacular splashes. Each time I heard a splash, I swiveled my head around, wondering if it was a fish flopping, or the elusive frog splashing around in the murky water. I didn’t hear him calling for his mate in the deep baritone burps he usually makes. I kept my eyes trained on the water in the open areas, as well as between the reeds and bushes, as I circled around the perimeter path, but whomever was enjoying the chilly water, they were nowhere to be seen.

I have to share some cute photos that my friend Leslie posted on her Facebook page over the last week or so. She has a frog that lives in her backyard. Unlike me, she does not have to go looking for this little guy – he just shows up in the funniest places. Yesterday, as you see above, he was staring down this big ol’ frog. Still another time he hopped aboard a giant tortoise. 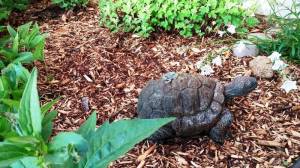 And look – here he thinks he is incognito in the flower garden on this large Hosta leaf. But, it’s not easy being a different shade of green when you don’t blend in.

As to these Kermit capers – this little guy is like Waldo … you never know where he’ll turn up. He has made himself right at home while sunning, or maybe he is just hanging out, hoping Leslie will take him into the house to be a little brother to her kitties.

After two loops on the Park path, it was time to meander home. Today’s expedition took me 90 minutes and yielded 5 more miles toward the ultimate goal, and by the time I reached the end of my route, 66 was the temperature – now that’s more like it!