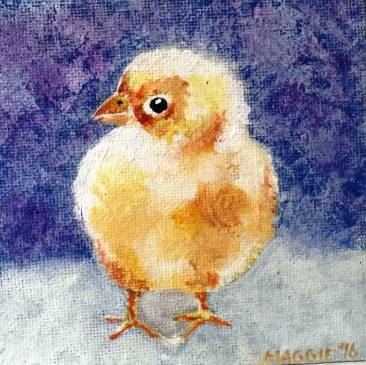 I hustled out of the house early, shutting the door and simultaneously stealing a quick glance at the sky which looked a little ominous, but I was determined to get a long walk in on this Good Friday morning.

My boss was already headed to Chi-Town and I was headed to River Town, er … the Rivers Edge Marina in Ecorse, where I could catch a glimpse of the Detroit River and very soon a freighter or two if I’m lucky. Today the Soo Locks opened for the shipping season, thus the freighter traffic begins – this is always a sure sign that warmer weather is here to stay.

Since the morning sky was especially gloomy and dismal looking, I went back downstairs and grabbed my golf umbrella off the hall tree … just in case. But I could not imagine that there was any more liquid left up in those brooding clouds after the torrential rain we got here Thursday – nearby Metro Airport logged 1.49 inches yesterday.

I saw a few fat robins wearing surly frowns; they no doubt grabbed more than their fair share of worms yesterday during all that rain and had planned on a big worm fest this morning. Well, Mother Nature disappointed those red-breasted birds, as the cold weather had those worms slithering off the concrete, through the saturated grass blades and back to their burrows for a few more days ‘til it warms up again.  When I set out it was only 28 degrees and the wind chill made the air temps half of that.  I mused that I must look a little silly bundled up in a down coat with wool accessories and carrying a big umbrella, but those dark gray clouds were hanging so low.  In fact, it seemed like I could take the tip of my umbrella and poke them back into place.

This morning’s skyscape with its low and darkish clouds had me thinking of the children’s folk tale and the alarmist named “Chicken Little” who thought the sky was falling after an acorn fell down on his head. Well, I didn’t have any nuts landing on my head, but I’ll tell you that the sky was sure very scary looking.

The neighborhood was quiet along my route and I suspect many schools and workplaces were closed for the holiday because there were no noises, save for the incessant drilling into the trees by many woodpeckers. We have so many in our own neighborhood, and especially in Wyandotte since they have so many trees.  I hear them every morning when I’m out walking.  Well, those woodpeckers were persistent little buggers and they never let up on the poor trees as their noisy rat-a-tat-tat pecking stirred the silence of the morning, so much so, that on this holiest day on the Christian calendar, those woodpeckers were doing their very best to make it a “holey” day as well.

I wended my way down Emmons Boulevard from Lincoln Park to Wyandotte, crossed the tracks and headed to the marina in Ecorse. It’s really not very picturesque there right now; in fact everything looked a little blah and dull – even the ducks seemed rather drab looking as they paddled around the tiny harbor, so I kept my camera tucked away and my warm gloves on.

When I finally made it home, I declared myself one lucky chick, that I didn’t get rained on and was able to tack another four miles to my walking miles tally for 2016.

I know you’ll smile over the picture that graces today’s blog post; it was created by my childhood artist friend Maggie Rust, who entitled it “Happy Easter 2016”.