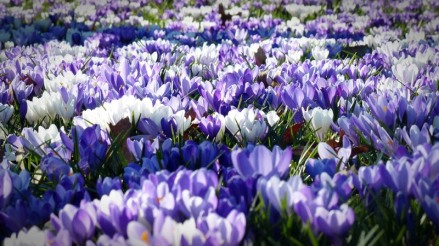 “Spring has sprung. The grass is riz. I wonder where dem flowers is?”

When I left the house this morning, it was Jack Frost, not the Easter Bunny, who had stopped by with offerings – ol’ Jack had deposited a heavy layer of frost onto everyone’s grass.  For as far as the eye could see, the grass and cars up and down the street were covered with frost, all which had melted by the time I returned home since the sun was out.

Unbelievably, it was only 27 degrees when I set out, and yesterday’s multitude of puddles that saturated the grass at Ford Park had frozen over with a thin veil of ice.  Well folks – Spring may be on the calendar (and hopefully in our hearts), but Mother Nature has spoken and she likes to show who is the boss.

I remember hearing the ditty above when I was a kid and I’ve resurrected it here for today’s post. There are many variations of this poem, but I like this one best.  Despite the wacky weather, we needn’t worry or wonder where the flowers ARE (being grammatically correct here) – they are coming along just fine in the neighborhoods that I pass on my daily trek.  There are crocuses and snowdrops everywhere, and, I had been wondering if those hyacinths were hardy enough to withstand two below-freezing nights, but they are still standing and looking perky.

The tulips are a whole different story. There are the early bloomers and the late bloomers.  In fact, the other day I heard a spokeswoman from Holland, Michigan saying that the tulips’ progress in that city is way ahead of schedule – the Tulip Festival doesn’t take place until the 7th through the 14th – and that would be MAY, not April!!  So, there is a lot of finger-crossing going on in that town so that the tulips don’t bloom too early and disappoint  those that flock to this annual event.

As I’ve trekked through the neighborhoods, I’ve noticed many tulips are just showing their foliage, while across the street, the bright-yellow tulips have been blooming for at least a week. Ann Elmore, the woman who planted those tulip bulbs, did so more than a half-century ago.  There has been a row of yellow tulips standing tall and proud in the front of the house every year that I’ve lived here and that will soon be fifty years.  Mrs. Elmore had fire-engine red tulips nestled alongside the house as well, and, just like clockwork, they and the yellow beauties out front, slowly crept out of the dirt and bloomed in early Spring, and the yellow tulips continue to do so, even though she passed away six years ago.  Unfortunately, when the house was sold, a rototiller scraped up every one of those red tulip bulbs, and, thus that beautiful burst of color has ceased to brighten and cheer the neighborhood every Spring.

The sun was out and I noticed my shadow as I marched past the tall stockade fence by the footbridge. In silhouette I saw a small rounded head, cloaked in a woolen hooded scarf and a body sheathed in a heavy down coat.  Since I brought along the camera this morning, I had worn my convertible mittens, in case I saw something that piqued my interest and wanted to take a photo.  All I had to do was flip up the top of the mitts and my fingers were bare.  But nothing stirred my senses enough to reach for that camera, and it remained buried deep beneath all my layers.

The sidewalks were full of piles of reddish-brown tree dander and it softened the click, click, click of my walking shoes as I pounded the sidewalk. At times it felt like I was walking on a bed of pine needles in the forest.  As I headed down the Boulevard to the marina, I took note that the trees were whispering conspiratorially with one another asking “is today the day for our coming-out party?”  But the old and wizened oak admonished the short and stout maple saying “no, no, no – we must wait because we don’t want to compete with the Easter celebrations this weekend!”

Nevertheless, on my way home, out of the corner of my eye, a flash of lime-green in Ford Park told me that the willow tree didn’t subscribe to this theory. It drooping branches were cascading toward the ground with leaves already unfurled.

Ahh … Spring at its finest.

Today, many of us are busy stuffing Easter baskets on the sly and stashing them into cupboards or closets out of sight until tomorrow. I was reminded of the big holiday when I saw a few stray cellophane strips that had escaped from someone’s Easter basket fixin’s and they were clinging to frozen grass blades in my path.  At the very minute my eye landed on those shiny plastic ribbons, a robin also spied them and soon swooped down, beak open to carry them away.  No doubt those plastic pickin’s  would be destined for a nest, but it won’t be at my house.  I am happy to report that my jerry-rigged bird contraption on the coach light, that I created to thwart the robins, is still working 100%.  There it will stay until mid-June, albeit junking up the front of the house, but keeping the nest building at bay.

Spring has sprung and it’s just waiting for your eyes to take it all in, so go out and do that, won’t you?

[Image by Bernswaetz from Pixabay]