How sweet it is … 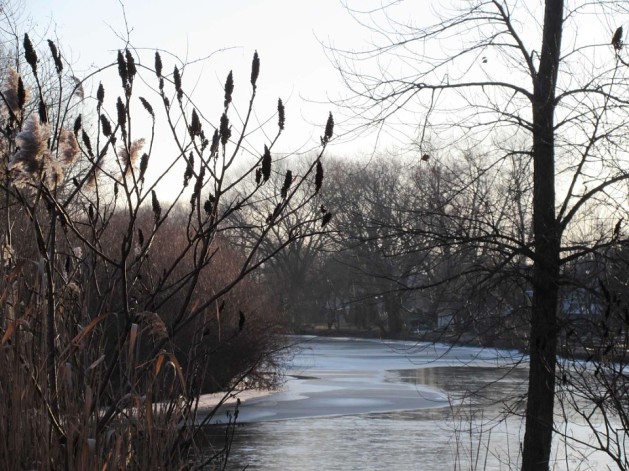 No, this is not another post about delectable donuts or bonbons and blooms, but … it was just nice to get out and about on a mid-Winter day, without tippy-toeing across the treacherous ice, or shoveling mounds of snow.

It was the first day the car and yours truly ventured out since February 3rd due to the never-ending snow and ice.  I put four miles on both the car and my feet.

It was early morning and the sky was layered in pretty pastels, ribbons of pink and blue like baby shower décor when the gender is still a mystery.  I had the camera with me, but I was still in the neighborhood, so did not have a clear view of the sky.  I guess I’ll carry the image of those gorgeous colors in my mind instead.

As I rolled along River Drive toward Council Point Park, I saw a single soul huffing and puffing along the perimeter path – that would be Todd, who never misses his weekend jogs, no matter the weather.  So, I knew my trek today would take me out of the neighborhood and to the “naturehood” just as those public service announcements from www.discovertheforest.org suggest you should do.

Since I packed my jacket pockets with Ziploc bags of peanuts, I was hoping the path would be clear enough for a walk at my favorite nature nook.  Those bags peeked out of my pockets, ready to dole out to my furry peanut pals – after all today is Random Acts of Kindness Day.

I was glad I wore my hiking boots with the lug soles in anticipation of some potential icy patches along the perimeter path.  The walking shoes just don’t cut it when ice is present, even though I have long legs and can step over most of it, but why take a chance?  With the hiking boots, I simply hop off the trail and walk in the snow when I encounter glare ice.

I wasn’t at the Park long until I pulled out that first Ziploc bag of peanuts, so I was ready for my “admirers” but they were strangely absent.  In fact, I was halfway around the first loop, wiggling my bag of peanuts as I walked, just as I usually do, when suddenly I saw one of my furry pals scrambling over toward me.  He was running quickly, his sharp claws sliding on the glazed pathway, those small paws skidding this way and that.  “Take your time!” I told him.  “I’m not going anywhere and it seems that you are I are the only two in this peanut game today anyway.”

I dumped a pile of peanuts at his feet, as if he were a little prince, and he snagged one in record time and happily started munching.  I wondered if he was “Parker” my favorite squirrel who joins me on the trail, or beside my car, as soon as he sees me.  He has no distinguishing features, just his loyalty, which rates high with me.  I stayed there thinking his missing pals would come over lickety-split, but they stayed away, perhaps up in their nests.  He grabbed another peanut, cracking it and clearly enjoying it, while sitting companionably at my feet.  Before I left, I slipped him a few more to take up into his tree, telling him “better squirrel them away little buddy, as Winter’s sure not over yet.”

I moseyed along then hit the trail at a good pace since there was a long stretch that was ice-free.  It was so peaceful in the Park, albeit a little desolate looking these days.

But soon the peace was disturbed by bird calls.  First, it was a couple of angry crows, buzzing overhead and squawking incessantly, then the jays started in, at least a half-dozen of them, screeching from up in a tall tree.  The jays were clearly agitated about something because they were dive-bombing around the tree, and swooping in and out of it with no rhyme or reason.  I wondered if they feared the crows, or, they were aware of a predator of some kind, like a hawk or a falcon.  I scanned the sky for telltale signs of either of these predator birds, but saw nothing.  I left the jays some peanuts on the trail, and noticed the next time around, they were all gone.  Then I remembered my jay back at the house – the sidewalks and driveway were treacherous for a good four days last week, so I wasn’t interacting with him, as I walked as few steps as possible.    I decided to look for him when I returned home.

I left the jays behind, and near the cement landing there was a mess of mallards in the only portion of the Creek that was not frozen over.  They were quacking their heads off, and some had stepped onto the ice and were snoozing or preening themselves.  I was rattling another bag of peanuts for anyone who was interested, and must have spooked a heron, who suddenly flew up out of nowhere and took flight, a blur of gray as it headed down the narrow Ecorse Creek passageway.

Two entire trips around the Park and I was about ready to head home.  It wasn’t the sunniest of days, but at least it was cold and dry … that is ‘til we get that promised dusting of snow tonight.  Any snow can stay away in  my opinion.

Before I departed the Park, however, I had one more stop.  I left about ten peanuts along the grooves in the picnic table under the pavilion roof.  Treats for a rainy day for the gang.  We’ll have a couple of those rainy days on Monday and Tuesday, along with temps in the low 60s, which means Mother Nature is just going a little wacky.

On this Random Acts of Kindness Day, here’s a quote to make  your new mantra …

Kindness should become the natural way of life.  Not the exception. ~Buddha

This is my first blog and I enjoy writing each and every post immensely. I started a walking regimen in 2011 and decided to create a blog as a means of memorializing the people, places and things I see on my daily walks. I have always enjoyed people watching, and so my blog is peppered with folks I meet, or reflections of characters I have known through the years. Often something piques my interest, or evokes a pleasant memory from my memory bank, so this becomes a “slice o’ life” blog post that day. I respect and appreciate nature and my interaction with Mother Nature’s gifts is also a common theme. Sometimes the most-ordinary items become fodder for points to ponder over and touch upon. My career has been in the legal field and I have been a legal secretary for four decades, primarily working in downtown Detroit, and now working from my home. I graduated from Wayne State University with a degree in print journalism in 1978, though I’ve never worked in that field. I like to think this blog is the writer in me finally emerging!! Walking and writing have met and shaken hands and the creative juices are flowing once again in Walkin’, Writin’, Wit & Whimsy – hope you think so too. - Linda Schaub
View all posts by Linda Schaub →
This entry was posted in Uncategorized and tagged nature, walk, Winter. Bookmark the permalink.