A bevy of birdhouses. 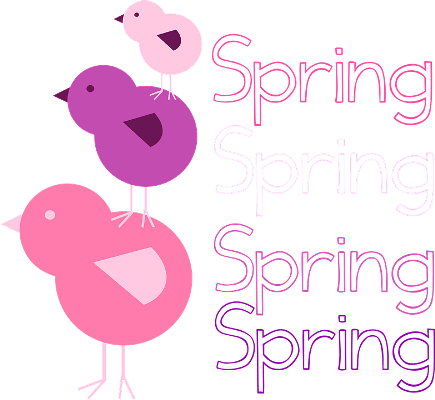 Spring is loading very slowly and we’re still muddling along in our Winter woolens and wraps while we wait for Mother Nature to kick start this new season.  Though I am grumbling about the cold, at least it’s been dry.  This morning the temps were tolerable: 26 degrees with a 20-degree wind chill and barely a breeze.

Some patchy sun was filtering through Council Point Park as I walked along the trail and that caused the birds, as well as the squirrels, to be out and about.  All of the ice is now gone from the Ecorse Creek, but the geese and ducks were still scarce this morning.

I saw a striking-looking red cardinal and wished I’d have had my camera handy to take its picture.  I had the camera zippered inside my vest pocket, underneath my squall coat, and, by the time I’d have dug for it, that beautiful bird would have bolted, having been spooked by all my bustling around.

The regular walkers continue to be missing in action, and, once again, I was the only person on the perimeter path this morning.  We are having a great weather weekend, so I will count on adding another ten more miles to my tally.

On the return trip, as I neared my house, I did my daily “bird check” as I always do once Spring arrives.

The radio commercials by local realtors tell us that Spring is the best time to sell your home; they also tout the mantra “location, location, location!”  Spring is the prime time for the neighborhood birds to plan ahead for the impending birth of their hatchlings and the best location for that is at my house, and, always in the most inopportune places because the birds don’t care one iota about my feelings in this matter.

For years I’ve dealt with the robins who like to build their nests in the elbow of my coach light.  It is a nice safe spot where they can tote long strands of dried grass and pack it with mud to build a solid nest there in the course of one day.  I happen to like this decorative light, or I’d have discarded it years ago due to their antics.  I’ve already replaced the back porch coach light with a flat, nondescript light for the very same reason.  Once nest-building time arrives, usually early April, suddenly the telltale signs of mud drips, dried grass and twigs are littering the porch and mailbox.  That tells me those pesky robins are up their annual  mischief.  I usually tear down the first nest, then pack the area with newspaper wadded up in plastic bags with a couple of shiny pinwheels sticking out for good measure.  The front of my home won’t win any “House Beautiful” awards, but it keeps the robins at bay.  Sure they pout and strut around, and even chitter disapprovingly at me, but sorry, I will evict you if you make this mess.

But last year I was blessed with no robin nests at all.  Oh, I saw them hopping around my property and I wanted to feel their respective foreheads and ask if they were okay, or had they finally gotten my message?

But, that didn’t mean that OTHER feathered friends would not like to live here.

Last Spring, I could hear the sound of metal rattling when I was in the bathroom once it was daylight in the quiet early morn.  I had no idea what caused the noise and these metal blinds have been in place since 1979 and I never heard it before.  But, by mid-May, Mother’s Day weekend to be exact, I was in the bathroom and heard faint tweets and peeps, then  alot of cheeping noises, which I knew right away belonged to baby birds.  It had to be sparrows since it is a narrow passageway to enter the blind box mechanism and a big fat robin would surely get wedged in there, with just its head poking out with a scowling face glaring at me.  Once it was light, I scurried outside and sure enough I could see pieces of grass and string and a nest high up in the blind area.  It was near a thorny pyracantha bush which gave those sparrows  a safe haven to raise their young.  I was horrified.  Had I seen the nest before the hatchlings arrived, I would have swiped it down and put an end to it, but I did not want to disturb the baby birds.

When all the cheeping and tweeting finally subsided, the nest was taken down and wire mesh put over the blind mechanism box because, after researching mating and nesting habits of house sparrows, I decided I was not going to sponsor their two to four broods per year here in the bathroom blind box.  No way!  Ha ha – I fixed you guys.  Please find another place to build your nest!

My late neighbor Marge loved the wild birds visiting her house, making nests in her bushes or birdhouses and raising their young.  There were, and still are, a bevy of birdhouses she set out on her deck to welcome them.

You may remember how some of those birdhouses looked after the February 9th Snowmageddon?

Well, all that snow and those lethal-looking icicles are long gone, and the birdhouses, still stacked neatly on a metal shelf in a corner of the deck, are move-in ready, just waiting for tiny inhabitants like sparrows and wrens.

From my house, I’ve watched those feathered friends pause at these most-opportune abodes …  then fly away.

Last year, an empty wire mesh basket on the same shelf, which had contained annuals the Summer before, became a makeshift nest for a Mama Dove. 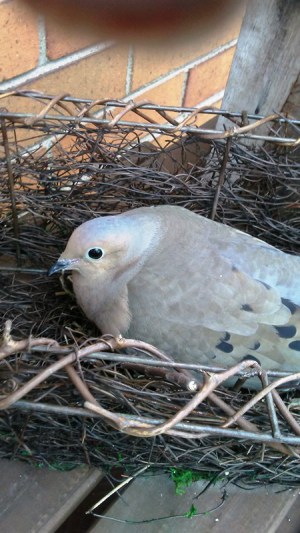 With her camera, Marge documented the laying of the eggs, and the male and female who took turns sitting on the two eggs until hatch day.  Only one baby dove emerged, and, from her kitchen Marge photographed the daily progress of the baby dove, taking its first steps, learning to fly off her glider and then suddenly the dove family disappeared.  It was fun glimpsing nature up close:  https://lindaschaubblog.net/2017/05/02/tuesday-musings-24/

Well, it’s location, location, location for the sparrows once again.  Those little brown birdies refused to be thwarted by mere mesh wire.  They squirmed and squeezed their tiny bodies underneath the mesh wire and flew up vertically to their primo location.  I heard them busy building their nests about ten days ago.  Last weekend I took some foam core board and shoved it under the wire hoping they’d take a hike to no avail.  They bypassed the board, gaining entry in a space a few inches wide, then the board blew out during one of the gusty weather days.   I know they lined up along the chain-link fence, feeling defiant as they watched it blow away, knowing they now had free and clear access to their nest in progress once again.

So, I prevailed upon the blind company for a solution – surely I was not the only one with the bird problem.  “Oh no” they said.  “You have company and we recommend holographic bird tape to deter the birds.”  This method uses streamers of silver tape with holographic designs which won’t hurt the birds, but they are scared of the shiny images and they don’t come near.  I looked at the online reviews – some yays and mostly nays.  Some folks said it didn’t faze the birds or they got used to it.

So, I went to Meijer and got lots of aluminum foil to foil the birds.  Tomorrow I will erect an aluminum foil tent around the blind – that’ll scare those sparrows, and the neighbors will probably think I’ve gone a little daft as well.

In reality, I have an affinity for birds, having had several beloved pet birds in the past, but I don’t necessarily embrace the sparrows’ version of “Home Tweet Home” and/or “Cheep Digs”.

This is my first blog and I enjoy writing each and every post immensely. I started a walking regimen in 2011 and decided to create a blog as a means of memorializing the people, places and things I see on my daily walks. I have always enjoyed people watching, and so my blog is peppered with folks I meet, or reflections of characters I have known through the years. Often something piques my interest, or evokes a pleasant memory from my memory bank, so this becomes a “slice o’ life” blog post that day. I respect and appreciate nature and my interaction with Mother Nature’s gifts is also a common theme. Sometimes the most-ordinary items become fodder for points to ponder over and touch upon. My career has been in the legal field and I have been a legal secretary for four decades, primarily working in downtown Detroit, and now working from my home. I graduated from Wayne State University with a degree in print journalism in 1978, though I’ve never worked in that field. I like to think this blog is the writer in me finally emerging!! Walking and writing have met and shaken hands and the creative juices are flowing once again in Walkin’, Writin’, Wit & Whimsy – hope you think so too. - Linda Schaub
View all posts by Linda Schaub →
This entry was posted in Uncategorized and tagged birdnests, birds, humor, nature, sparrows, Spring, walking. Bookmark the permalink.

20 Responses to A bevy of birdhouses.