This morning, the weatherman said that as of today, no more snow is predicted for us this season.   I’m happy to hear that it is Winter’s swan song.

Whether we should believe any of the weathermen is debatable, since they all predicted a 1-2 inch snowfall last night. *

This morning I got up and switched on the radio to get my first news fix of the day and the weatherman said “oops – that predicted snow kind of fizzled out.”

So, I gained a bonus walk.

Oops indeed … it seems there are many oops when it comes to the weather, and that is why I told you recently that I wait to see what it looks like with  my own eyes, and then decide whether I will venture out on a walk.

We’re told that cold weather will prevail until the end of the month, but no more snow, so do I dare tuck away the shovel and hiking boots, or keep them within easy reach?

The swans are still present and accounted for, gliding gracefully down the Ecorse Creek at Council Point Park.  This one was in the wider portion of the Creek.

I watched from afar, camera in hand, enjoying the beauty of this bird.

I watched it take that first sip of water – the pause that refreshes.

Then a  second sip, equally as tasty.

So why not stick your head and neck into the water and get totally refreshed? 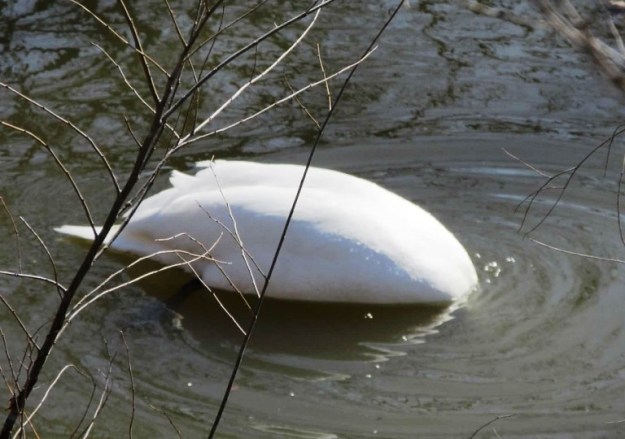 A fellow walker by the name of Mike told me the end of April is when the cygnets are born and at John Dingell Park there is a cove where you can find swans with their babies.  Mama swans transport their cygnets by carrying them on their back.  I’ve only seen this in pictures before.  Mike goes to Dingell Park several times a week and promised to tell me about his first sighting of the 2018 cygnets, so I can hustle down there for a photo op.  Mike said once the silver bass start running, Dingell Park will be overrun with fishermen, so I best get down there sometime in April for a primo and unobstructed view of the cygnets.

P.S. – *  So go ahead and ask me what’s shakin’ … the weatherman DID NOT predict the earthquake that rumbled through here around 8:00 p.m. tonight.  I had just settled in to write today’s blog post and heard this long, low rumble which made the house shake.  I thought to myself “is that an earthquake?  Another meteorite?  Nah, it’s just a large airplane flying way too low.”  But, my first guess was spot on.  At 8:01 p.m. there WAS a 3.6 magnitude earthquake originating out of Amherstburg, Ontario which is 21 miles from here.  It was felt in all the Downriver cities.  I turned on WWJ and they reported calls from those who felt the ground shaking but no earthquake was reported.  Five minutes later a shallow earthquake was confirmed:

Those darn Canadians!  I say that tongue-in-cheek, because I am a Canadian myself.  So what is next?  A meteorite in January, an earthquake in April …. I think someone made Mother Nature mad!

This is my first blog and I enjoy writing each and every post immensely. I started a walking regimen in 2011 and decided to create a blog as a means of memorializing the people, places and things I see on my daily walks. I have always enjoyed people watching, and so my blog is peppered with folks I meet, or reflections of characters I have known through the years. Often something piques my interest, or evokes a pleasant memory from my memory bank, so this becomes a “slice o’ life” blog post that day. I respect and appreciate nature and my interaction with Mother Nature’s gifts is also a common theme. Sometimes the most-ordinary items become fodder for points to ponder over and touch upon. My career has been in the legal field and I have been a legal secretary for four decades, primarily working in downtown Detroit, and now working from my home. I graduated from Wayne State University with a degree in print journalism in 1978, though I’ve never worked in that field. I like to think this blog is the writer in me finally emerging!! Walking and writing have met and shaken hands and the creative juices are flowing once again in Walkin’, Writin’, Wit & Whimsy – hope you think so too. - Linda Schaub
View all posts by Linda Schaub →
This entry was posted in Uncategorized and tagged Earthquake, nature, Spring, swan, walk, walking, Winter. Bookmark the permalink.