Tiptoe through the tombstones with me. 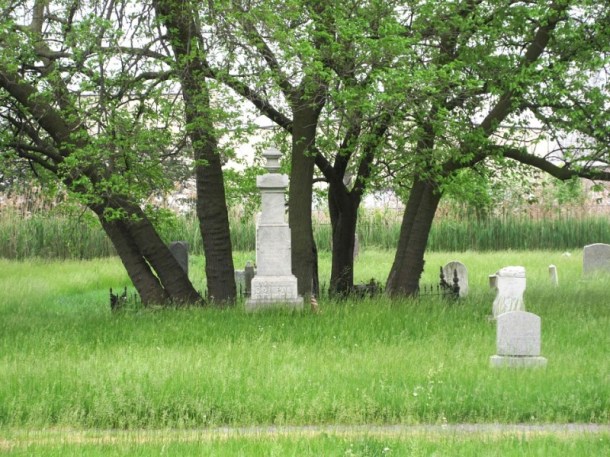 In Saturday’s post,  I wrote about my morning meanderings, which included stops at three different parks, as well as historic Oakwood Cemetery, the latter which I’m going to focus on today.

I already had goosebumps from the chilly morning air before I stopped at this landmark built in 1869, and located at the corner of Biddle and Ford Avenues in Wyandotte.  Every time I go to Bishop Park, I pass this cemetery, which, for many years, has been rumored to be haunted.  While it wasn’t scary roaming around in the daylight hours checking out the tombstones and gnarly looking trees, I was the only one there, so I decided to be prudent and not explore the back acreage as it was quite far from the main drag.  The morning was still gray and gloomy as well, the perfect atmosphere to visit this historical site. 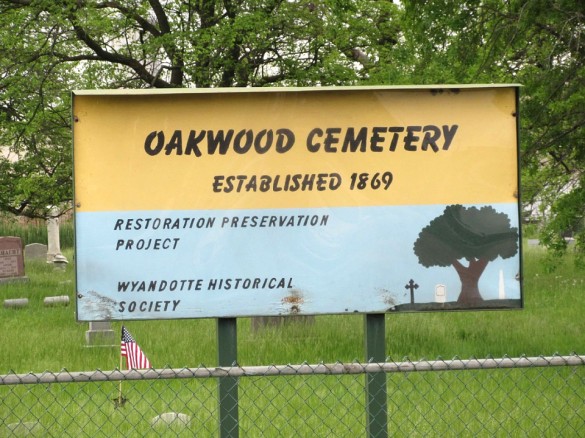 I last visited this cemetery in the late 1960s.  I was a teenager then and took a Summer art class sponsored by the City of Lincoln Park.  The person who taught the class was an artist and her passion was drawing with charcoal pencils.  So every Wednesday, weather permitting, the City’s Parks and Recreation bus took us to a different local place of interest.  We each brought a blanket and clutching our sketchbooks and charcoal pencils, we’d plunk down on the ground and draw to our heart’s desire, while our teacher peered over our shoulder and offered commentary on our work.  It was a fun class and we often ventured to Wyandotte as Lincoln Park had no real places of historical interest.

One Wednesday the bus dropped us off and our small group trooped through Oakwood Cemetery.  It felt a little awkward being there, all of us having been raised to understand a cemetery was a place of solemnity and reverence, so we quietly paused at different tombstones or markers to decide which one we would choose as our subject for that week’s assignment.  When we were done with our sketch, our teacher asked us to rip a sheet from our sketchbook and lay it against a tombstone, then use our pencil to make a charcoal impression of the engraved inscription.  I remember thinking that was a little weird, plus the tombstone inscriptions had eroded and were almost smooth, but, like the other members of the class, I complied.

So fast forward about five decades …

The years fell away and I was mindful of that many decades-ago art class assignment as I began to amble through Oakwood Cemetery, and once again viewed the many tombstones in all shapes and sizes.

A wrought-iron fence surrounds the property, and the heavy gates were propped open since the sign states the cemetery is open from dawn until dusk.

First, I was fascinated by the collection of gnarly and twisted trees, some of them leaning all the way to the ground.

Along the wrought-iron fence, one such tree had this beautiful pink rosebush, likely many decades old, and it rambled up the fence. 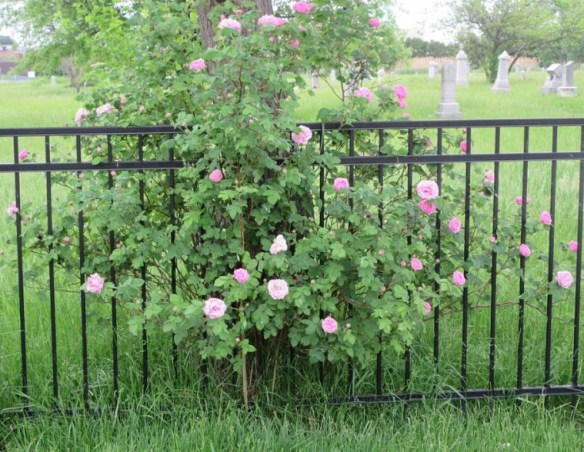 Several contingents of graves were segregated in various spots around the cemetery and festooned with small flags, likely in honor of Memorial Day, and also because this is the final resting place for many veterans.  Today I researched to discover some information on the war dead at Oakwood Cemetery, and learned there are 45 veterans buried there, many from the Civil War.  One veteran named John Clark died February 22, 1827.  Clark, a captain in the New York Militia, fought and was wounded in the War of 1812.  It is John Clark’s family that established this cemetery back in 1869. 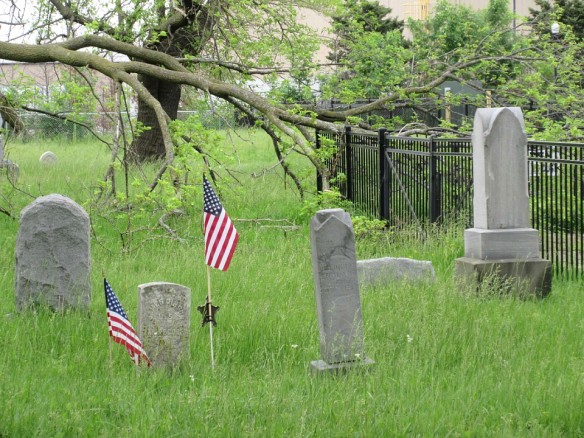 I was reminded just how desolate and unloved this historical place really is by the nearly foot-high grass which was so dense in places, you could not even see many of the low gravestones.  There are volunteers who do tend to the property, since no one claims ownership and the City of Wyandotte treats it as a historical site, but the unkempt appearance tells me that sadly, it has been awhile since anyone ventured here.

BASF’s chemical plant looms large in the background, somehow looking out of place with this old cemetery.

I was reluctant to traipse through that overgrown grass as I worried about ticks or even mosquitoes, since we have an abundance of each this year thanks to the unrelenting rain in May and last week’s extreme heat.  The news media is full of warnings to be mindful of stagnant water and overgrown grass to avoid bites from these pests.

There was a gravel-covered path which appeared to be used by vehicles entering the cemetery, but those ruts were muddy and full of water, so going down this path wasn’t a good option.

Since I was there to explore and take a few photos, I had no choice but to cut through the high grass, or turn around and go back and return another day.

These are some of the larger, unique or very old tombstones I saw. 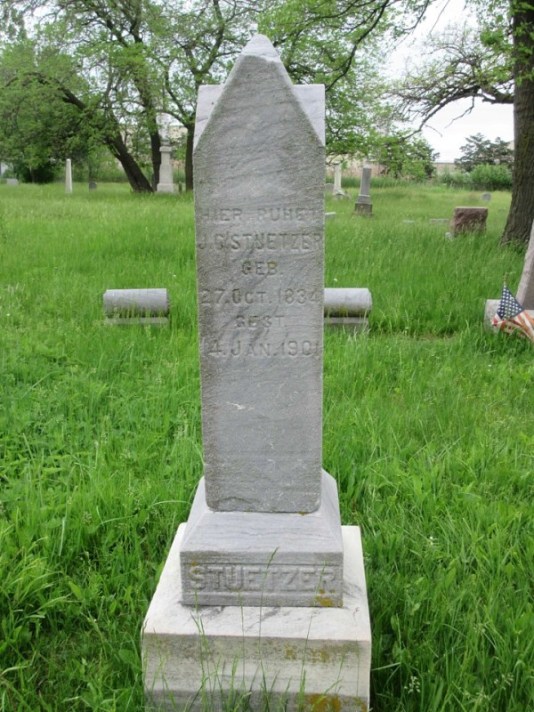 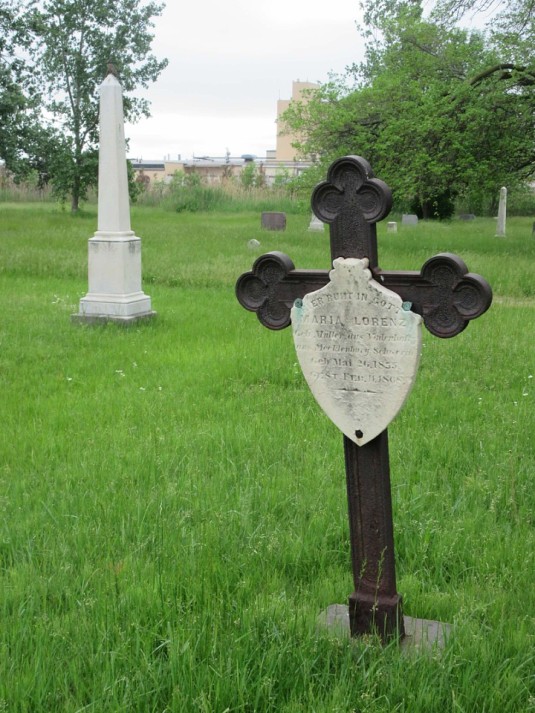 There was a brisk northeast breeze stirring the huge wind chimes on this tree and it seemed eerie to me. 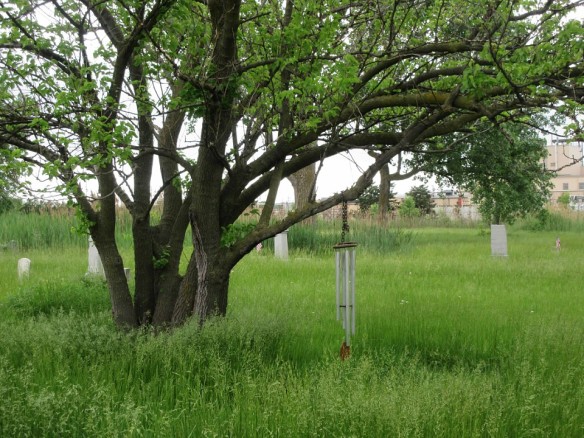 I spent about an hour at Oakwood Cemetery and likely won’t return again, but it satisfied my curiosity and was an interesting lookback to an era long before my time.  If you want to read more about the history and/or urban legends of Oakwood Cemetery, here is a link:

Rain once again spoiled my walk this morning.  I had intended to participate in an anti-bullying walk at Heritage Park which was slated for 1:00 p.m.  But the weather forecast for this afternoon was iffy and I didn’t want to drive that ten-mile round trip only for it to pour or storm, so I did not go.  In April, we had snow instead of April rain showers, and I thought once May was done, the rain would be as well … evidently not.

This is my first blog and I enjoy writing each and every post immensely. I started a walking regimen in 2011 and decided to create a blog as a means of memorializing the people, places and things I see on my daily walks. I have always enjoyed people watching, and so my blog is peppered with folks I meet, or reflections of characters I have known through the years. Often something piques my interest, or evokes a pleasant memory from my memory bank, so this becomes a “slice o’ life” blog post that day. I respect and appreciate nature and my interaction with Mother Nature’s gifts is also a common theme. Sometimes the most-ordinary items become fodder for points to ponder over and touch upon. My career has been in the legal field and I have been a legal secretary for four decades, primarily working in downtown Detroit, and now working from my home. I graduated from Wayne State University with a degree in print journalism in 1978, though I’ve never worked in that field. I like to think this blog is the writer in me finally emerging!! Walking and writing have met and shaken hands and the creative juices are flowing once again in Walkin’, Writin’, Wit & Whimsy – hope you think so too. - Linda Schaub
View all posts by Linda Schaub →
This entry was posted in Uncategorized and tagged Cemetery, Spring, Veterans, walk, walking. Bookmark the permalink.

31 Responses to Tiptoe through the tombstones with me.