… and the kids let out a collective cheer – the parents not so much, especially the moms.  I remember how good it felt on that last day of school, knowing that ten weeks stretched before you, with no class, no homework or tests.  I’d be ecstatic, even if it meant I had those pesky Summertime chores to do, like pull weeds, or help out inside.

I suspect there will be more kids at Council Point Park now every morning, some tagging along with their moms to walk the trail by their side, or perhaps to use the playground equipment there.

I wish I could encourage those kids not to just walk along aimlessly on the trail, or enjoy a few quick trips down the slide, because there is so much more to experience if you just take a few minutes each day to stop and look around you.

This past Wednesday morning, the clock alarm buzzed and so I trudged out to the kitchen to turn it off.  I can’t have the alarm at the bedside as it makes its incessant noise, then I turn it off and go back into dreamland.  So, instead I have two alarms, with the obnoxious-sounding one sitting on the kitchen table.  Just as I do, 365 days a year, I turned on the kitchen light, turned off the alarm clock, then went to the kitchen sink to fill up the kettle to make a cup of instant coffee.  On Wednesday morning, there were little ants running everywhere in the stainless steel sink and along the countertop.  They were sure more animated than I was!  The CFL bulb in the kitchen was still dim as it takes a few minutes to totally warm up and work properly, so in my still sleepy stupor, those little bodies darting over the stainless steel sink area, left me momentarily mystified.

Then I knew – oh my goodness, the baby ants were back!

I had a mess of baby ants a couple of years ago when I still had my canary Buddy, and was terrified one would walk across the countertop and into his cage and bite him.  We both survived, but then, just like now, the countertop had several low paper plates filled with cornmeal.  This is for the ants to feast on, since it eventually kills them as they can’t digest it properly.

Yes, I love all creatures, but I draw the line at creepy crawlies that have more legs than I do and run faster than me.

So, as I walked to the Park on Wednesday morning, I was thinking that the kitchen would look like an ant farm run amok by the time I returned, and I was not in the mood to be swiveling my head toward the sink all day as ants skittered along the counter tops here, there and everywhere.

But, once down at the Park, I momentarily forgot my ant issues and started out on the trail – after all, there were steps to walk, goslings to gawk at, hungry squirrels to feed, and … pictures to be taken if something interesting crossed my path, like Mama squirrel who, as you see in the header photo, looked at me indignantly when I tried to offer her peanuts instead of her mud-covered walnut she insisted on gnawing on.

Once again, in the still of the morning, I heard the belly flops of large fish in the Ecorse Creek which runs parallel to the walking trail.  That phenomenon had been happening for a few days already.  The big splashes and churning of the water seemed likely because it’s spawning season.  I saw a few fish leap out of the water, then come down hard in a belly flop.   Here’s the aftermath of one exuberant fish flop near the pond lilies.

I stood poised with the camera, but those flopping fish either went downstream, or to another location, so I was left standing there waiting on them.  I remembered the fish flopping happened a few years ago and a fellow walker told me it was Asian carp that had found their way into our tiny Creek from the River.

But the water was not the only happenin’ place on Wednesday.

Recently I wrote a post about admiring the Painted Turtles on the partially submerged log at the Creek.  I can barely see them from the trail and must peep through the leaves to watch them and/or take their picture.  Other walkers have told me they’ve seen Painted Turtles ambling along the pathway, just taking their time, as turtles are inclined to do.  So, on the second loop, which is usually devoid of interesting critters, ahead of me on the path, was a Painted Turtle.

Since he didn’t run all over the place like the squirrels, taking his photo was pretty easy.

His shell was still glossy and damp, so he likely was on a brief foray to land, maybe for a change of scenery, eventually to return to the Creek. 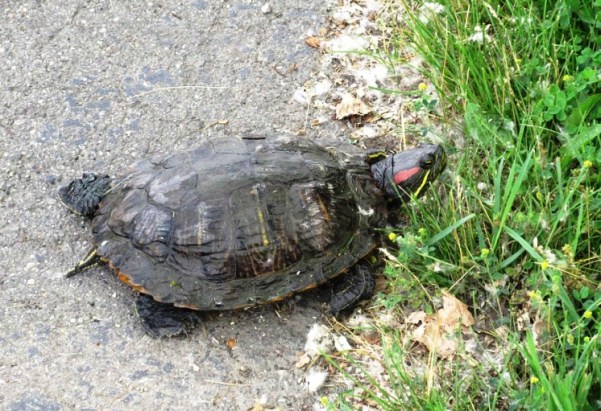 I was bent over, checking him out, when fellow walkers, Janet and John, called to me across the walking loop:  “hey Linda, did you see the big turtle on the hill?”  “Nope” I answered them, and we started a back-and-forth conversation about it.  Meanwhile this small turtle scuttled away, thus thwarting any more photo ops. 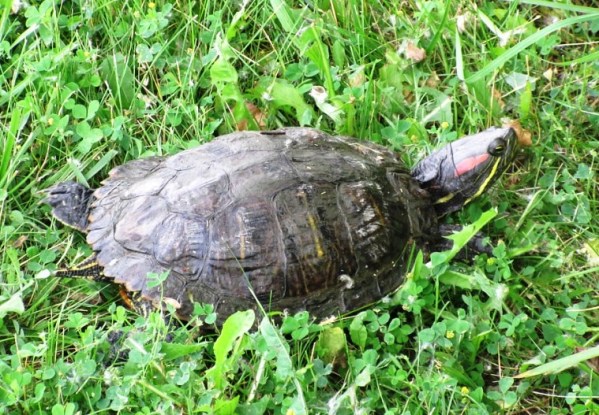 I crossed over to their side of the walking loop to get more info.  Janet described where it was, and I had just walked past the darn thing, but admittedly, while walking, I do occasionally have to scan the upcoming pathway for goose poop and cracks in the asphalt.

I thanked them and quickly retraced my steps.  By the time I arrived, a small crowd was encircling this large turtle.  Unlike the other turtle, this one’s shell was quite dry and dusty looking and it had been out of the water so long that it had bird droppings on the top of its shell.

So, I stood there, alongside the other walkers and moms pushing strollers, as we watched this turtle using its front and back legs to vigorously dig a deep hole in the grassy slope.  Never mind that we looked like a group of voyeurs, hoping to catch a glimpse of her laying her eggs; instead, we were all mesmerized by this glimpse into such a natural phenomenon.  We all stood watching her every move for a good twenty-five minutes, many of us contributing tidbits of information we had gleaned through the years on how turtles lay eggs, and then the hatchlings will break out of their shells in a race to submerge themselves in water.

Of course I took some photos, even if her shell was festooned with bird poop.  I wanted to share what I saw, that being her massive rear legs kicking the dirt away, and Mama Turtle, having moistened that earth, pounding it down further to ensure the muddy hole would safely accommodate all the eggs once they were laid. 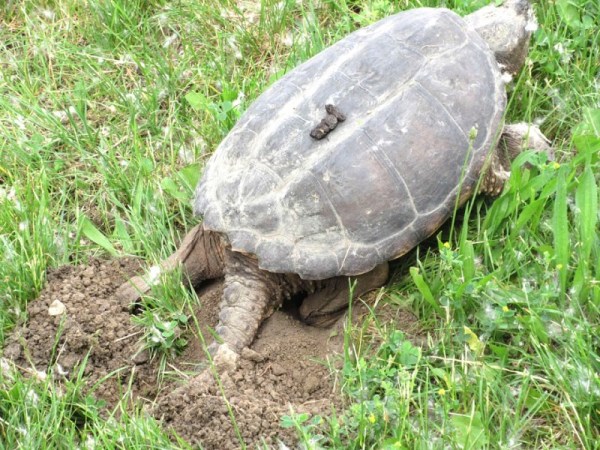 Approximately 80-90 days later, the hatchlings emerge and make a beeline for the water.  If you’re interested in seeing a short video, here is one which shows what we were watching, as described above:  https://www.youtube.com/watch?v=XyiwCNDsdyM ]

I just knew I had to go back the  next day and see how Mama Turtle covered up the nest and I did just that.  Just as the online articles stated, she camouflaged the hole with loose soil and no one would be any the wiser; after all, it is a Park and this nest area is not near any activity like the soccer field or inline skating area.  But, contrary to the information I read, this nest is only 20 feet from the Creek’s edge.

Here is a photo of the covered-up nest … yes, it is nothing spectacular.  The miracle of life will occur about six or more inches beneath that surface.

After nearly a half-hour of watching the turtle digging her hole, it was time to head home and get ready for work.

But, wait … there were more surprises in store for me at the Park.  While the turtles were fascinating, yesterday I was on the pathway and heard another fish flopping in the Creek.  It happened twice in one minute, so I strayed over to the water’s edge, and suddenly, out of the corner of my eye, I saw something large move in the black raspberry bush beside me.  I jumped back as it startled me.  My sudden presence brought this woodchuck out of its nirvana of noshing on black raspberries. 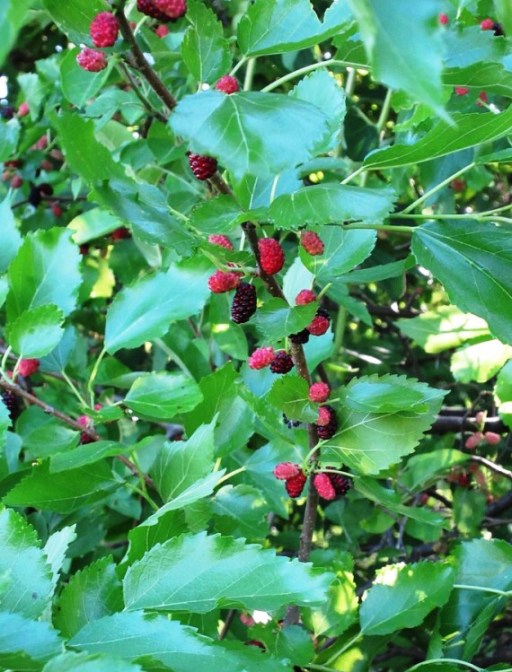 We had a quick staring match …

… then it reluctantly hightailed it out of the berry bush … 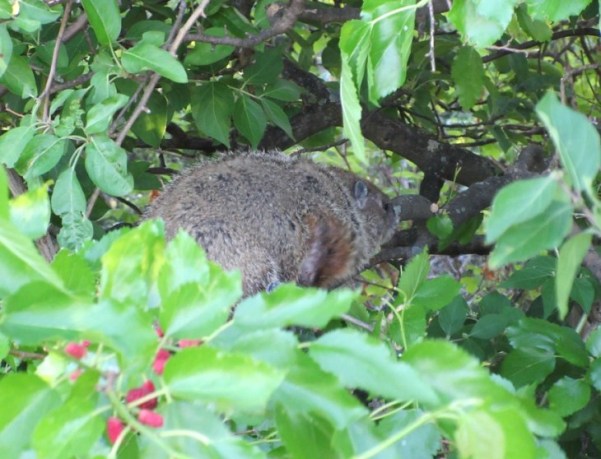 … and waddled over to the Creek’s edge.

I saw the elusive heron who was preening itself on the cement precipice … that is, until it saw me and bolted.

There are a world of wonders in my favorite nature nook.  I hope kids will develop the same fascination as I had many decades ago, when I dipped an empty Red Rose pickle jar into the Creek in the meadow at the end of my street and brought home tadpoles for temporary pets.

And now I’ll close this scholarly post, with a quote from a brilliant mind:

“Look deep into nature, and then you will understand everything better.”

This is my first blog and I enjoy writing each and every post immensely. I started a walking regimen in 2011 and decided to create a blog as a means of memorializing the people, places and things I see on my daily walks. I have always enjoyed people watching, and so my blog is peppered with folks I meet, or reflections of characters I have known through the years. Often something piques my interest, or evokes a pleasant memory from my memory bank, so this becomes a “slice o’ life” blog post that day. I respect and appreciate nature and my interaction with Mother Nature’s gifts is also a common theme. Sometimes the most-ordinary items become fodder for points to ponder over and touch upon. My career has been in the legal field and I have been a legal secretary for four decades, primarily working in downtown Detroit, and now working from my home. I graduated from Wayne State University with a degree in print journalism in 1978, though I’ve never worked in that field. I like to think this blog is the writer in me finally emerging!! Walking and writing have met and shaken hands and the creative juices are flowing once again in Walkin’, Writin’, Wit & Whimsy – hope you think so too. - Linda Schaub
View all posts by Linda Schaub →
This entry was posted in Uncategorized and tagged nature, schooll, Spring, Turtles, walk, walking. Bookmark the permalink.

44 Responses to The last school bell ‘til Fall rang today …