Around the ‘hood and under the hood.

Summer’s long days and scorching temps go hand in hand with cruisin’ … no, not on the high seas, but cruisin’ in your classic automobile along Fort Street for the annual Cruisin’ Downriver event.

When Cruisin’ Downriver was created in 2000, the concept really took off after that inaugural year.  A local oldies radio station set up and broadcast their show at Memorial Park and various primo parking lots along the cruise route, which is six miles long and stretches from Southfield Road in Lincoln Park to Sibley Road in Riverview.

Of course cruisin’ in classic vehicles is not for everyone, especially when Southeast Michigan expects a record-breaking temperature of 96 degrees with a heat index of 105 degrees for tomorrow’s cruise.  Those classic car engines sure aren’t equipped for that heat, and, likely there will be more breakdowns and raised hoods along Fort Street than wheelies and burning rubber.  Drivers won’t fare much better than their nostalgic vehicles as they swelter without A/C and stick to those leatherette seats.

And, it’s not only the weather that will be a pain.  Cruisers will share the road with 18-wheelers and all other vehicles diverted onto Fort Street since the Rouge River Bridge Project began in February 2017 and is due for completion this November.  Wall-to-wall traffic on weekdays is now the norm, so the added vehicles on Fort Street will likely temper the enthusiasm of even the most diehard car enthusiast.  Though I’m not a big fan of the annual Cruise, I do usually stop by and watch the parade of classic cars go by.

The official hours for Cruisin’ Downriver are 9:00 a.m. to 9:00 p.m. tomorrow, but an evening sans rain and still-bright skies had cruisers sneaking in a few laps beforehand.  As I write this post, I’m listening to muscle cars way down on Fort Street gunning their engines and I can imagine the exhaust wafting upward at 85 degrees on this ozone action day.

This past week, I’ve seen a few classic cars tooling around Downriver, getting geared up for the big day, like this orange-and-cream-colored Chevy Bel Air parked at Council Point Park.

How about the fins on this classic car?

Check out the side of this ride.

Sticking to the seats – no fun! 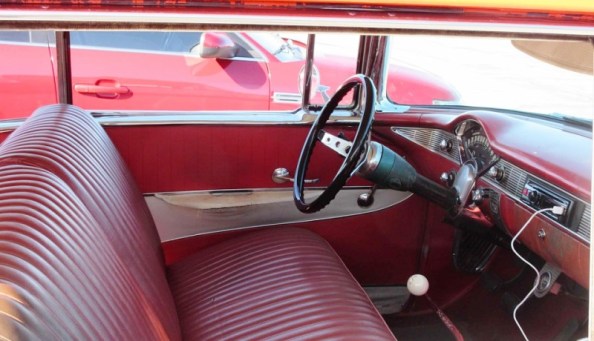 These two classic cars caught my eye while strolling through the ‘hood on my walk.  I wonder if anyone pooled their pennies and snapped up this old Plymouth yet? 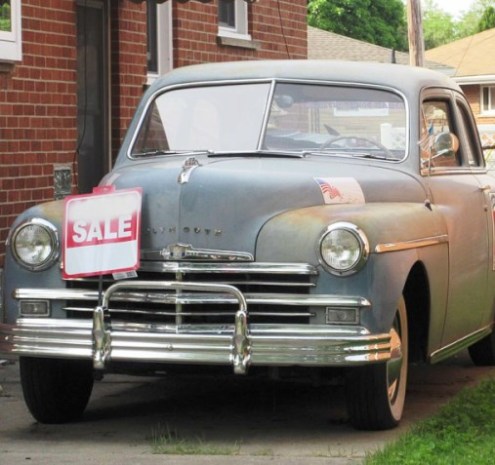 How about this fabulous Ford T-Bird?

This vintage car’s owner is a regular at Yum Yum Donuts at Fort Street and Emmons Boulevard.

The weather will be hot and steamy, but with no rain slated for a few days, I’ll venture out to Council Point Park, then bop over to Fort Street to check out the 2018 parade of cars.  I’ll get all my steps in before it gets too oppressive out there.  I had hoped to have walked 500 miles by the end of June, but so many days of rain kept my total miles at just 460 as of today … maybe the second half of the year will be more conducive for walking.

This is my first blog and I enjoy writing each and every post immensely. I started a walking regimen in 2011 and decided to create a blog as a means of memorializing the people, places and things I see on my daily walks. I have always enjoyed people watching, and so my blog is peppered with folks I meet, or reflections of characters I have known through the years. Often something piques my interest, or evokes a pleasant memory from my memory bank, so this becomes a “slice o’ life” blog post that day. I respect and appreciate nature and my interaction with Mother Nature’s gifts is also a common theme. Sometimes the most-ordinary items become fodder for points to ponder over and touch upon. My career has been in the legal field and I have been a legal secretary for four decades, primarily working in downtown Detroit, and now working from my home. I graduated from Wayne State University with a degree in print journalism in 1978, though I’ve never worked in that field. I like to think this blog is the writer in me finally emerging!! Walking and writing have met and shaken hands and the creative juices are flowing once again in Walkin’, Writin’, Wit & Whimsy – hope you think so too. - Linda Schaub
View all posts by Linda Schaub →
This entry was posted in Uncategorized and tagged Car cruise, cars, classic cars, Hot, Summer, vintage. Bookmark the permalink.

17 Responses to Around the ‘hood and under the hood.