Yesterday I finally got around to wearing my new glasses and the difference in the prescription was amazing!  As I wended my way down Pagel Avenue to Council Point Park, I mused that I would be telling the Park’s furry and feathered critters “the better to see you with my dear” … that is, if I saw any there.  As I mentioned recently, it has been like Dullsville with the usual Park inhabitants rather scarce.

I walked the first loop of the perimeter path, without having any reason to whip out the camera, nor retrieve the Ziploc bag of fresh peanuts that is tucked into the mesh bag that swings merrily from my fanny pack .  I didn’t even pass a single walker.

But, all that changed when I got to the second loop, usually the less-interesting part of my walk.  There are no dense bushes or trees, no reeds or swamp grass, very few birds, and the inline skating rink and vast fields take up most of that part of the Park.

Then I saw the most magnificent-looking and fairly large rabbit.  He was grooming himself by the side of the path, so I pulled out the camera.

I saw a flash of white powder puff tail, but mostly I noticed his ears which looked almost translucent as the sun’s rays shone through them.

I crept up closer and he was busy munching on the grass, and didn’t pay any attention to me.  I noticed a horsefly had settled onto his face, but he seemed unfazed by that big fly.

With the camera trained on this rabbit, I wasn’t watching the other side of the walking loop.  When the rabbit finished his breakfast, on huge haunches he headed toward the bushes, as I tried once again, unsuccessfully, to photograph that fuzzy white tail.

Instantly, I was distracted by the horsefly that remained after the rabbit’s departure, as it went straight for my bare calves.  I didn’t have anything to swat it with, and not wanting to use the palm of my hand, I stood there, stork like, trying to use my other leg to brush off that annoying fly.  I got back on the path, thinking I’d leave the fly behind in the dust, when I saw a squirrel come racing toward me, crossing the grassy “donut” that separates the two sides of the pathway.  “Could it be Parker?” is what I asked myself, as he kept running, just like Lassie the collie who’d come to greet Timmy when he got off the school bus, in one of my favorite childhood shows.

He stopped short of my feet and began circling and pacing around me. 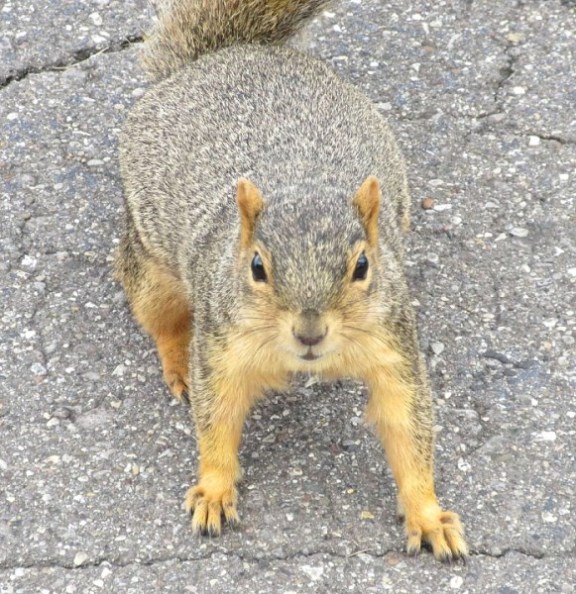 Finally, he came over to investigate my shoe; that clinched it – it had to be Parker! 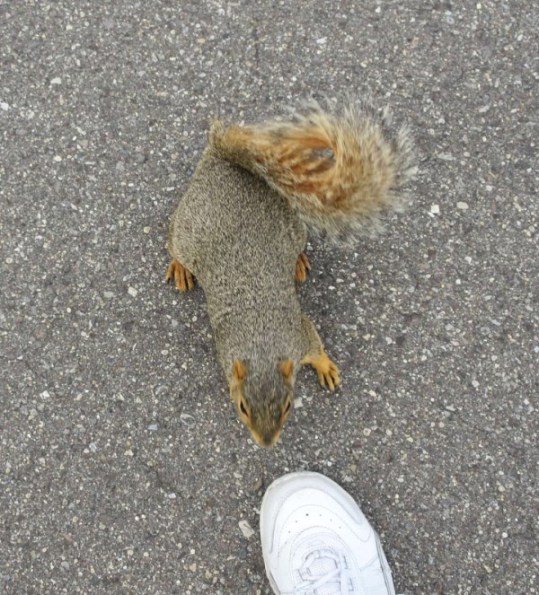 Next, he was prancing around my feet while eying the mesh bag – pretty savvy, as he remembered the many times I’d retrieve the Ziploc bag and wiggle it at him, if he was not already hustling over to greet me.

To my newer followers, Parker was a squirrel whose antics I often wrote about on my many trips to Council Point Park.  He would either nuzzle the toe of my boot or shoe, or stand on his haunches to try to reach the peanut bag.  Often, he’d follow along behind me, much to the amusement of the other walkers.  I called him “my shadow” in this post earlier this year https://lindaschaubblog.net/2018/03/05/me-and-my-shadow-2/

Of course I know I shouldn’t  play favorites but he got more peanuts than the others, and when I took “Nutter Butters” … well, I’d slip him a few more on the side.  He got M&Ms last year and the occasional apple or tangerine.

Yes, he has my heart.

I’ve missed him these last few months.  I told Parker he must wait for his treat until I got a few pictures of him to share on my blog.  He soon grew tired of the impromptu photo session and strayed from my feet.  I put the camera away in the case and fumbled to get out some peanuts to toss them on the path.

In that split-second, a robin was flying very low and blitzed past Parker.  I say “blitzed” because he came at him with such force, causing Parker to reel a little and he was off balance, then looked a little stunned.  I, too, was stunned and had my doubts that the robin was merely flying low to get a worm from the ground as its feet never hit the grass and it flew away.  Before I could put out any peanuts, Parker sped right past me and scaled a small tree in a nanosecond.

I dragged out the camera again.

There he remained, looking a little shook up.  You’ll note his paw on his chest … was his heart beating erratically from this strange encounter?

I stayed with Parker about five minutes, talking to him softly, and finally lured him down to ground level with a handful of peanuts.  He crept down the tree slowly and as he ambled toward me, if that robin didn’t swoop down and head butt him again.  So, it was no accident!  The camera was in the pouch as I can only deal with one thing at a time – it’s either peanuts or pictures.  I retrieved the camera once again, as Parker scurried into the bushes. 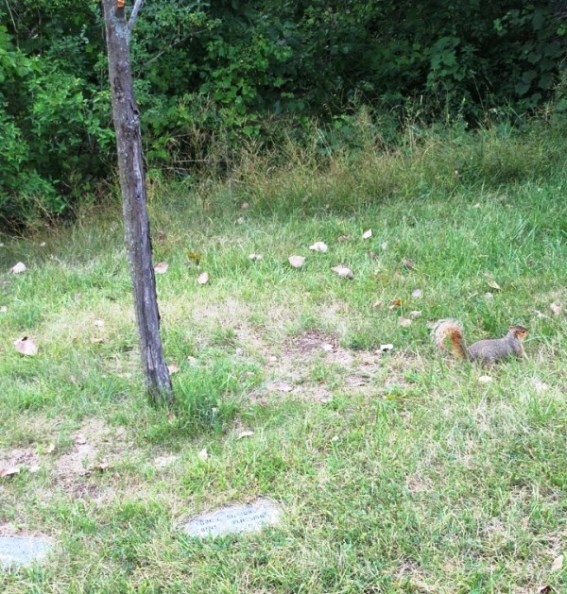 I thought I’d stay to see if he returned, but the pesky fly was back, biting around my ankles and backs of my knees– what in the world?  I gave up and tried swatting it with the back of my hand, to no avail.

Just then, Maria, another walker at the Park, came by and signaled to me to look into the deep tunnel, the burrow where the groundhog and his family live.  She whispered “look, the baby is peeking out the hole at you – get a picture!”  I moved over for a closer look and if the fly didn’t bite again, so intensely this time that I jiggled my leg to turn it loose.  This spooked the baby groundhog who disappeared backwards into this cavernous hole. 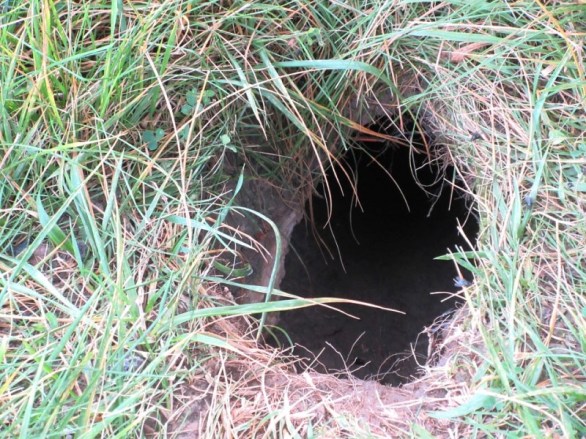 I tried coaxing it to the top with peanuts (what else).  I tossed a few into that gaping black hole, but he (or she) is not a peanut fan and remained below ground.  Maria showed me a video she had just taken on her phone of this cute little fellow while I was flailing around with the fly.  That horsefly followed me around the Park the balance of my walk, and I lost him somewhere as I exited the Park.

This morning I looked for the groundhog and its “pup” but all I saw was the empty tunnel, and it seemed that the pesky fly, the dive-bombing robin and that sweet squirrel were likewise MIA and nowhere to be found.

This is my first blog and I enjoy writing each and every post immensely. I started a walking regimen in 2011 and decided to create a blog as a means of memorializing the people, places and things I see on my daily walks. I have always enjoyed people watching, and so my blog is peppered with folks I meet, or reflections of characters I have known through the years. Often something piques my interest, or evokes a pleasant memory from my memory bank, so this becomes a “slice o’ life” blog post that day. I respect and appreciate nature and my interaction with Mother Nature’s gifts is also a common theme. Sometimes the most-ordinary items become fodder for points to ponder over and touch upon. My career has been in the legal field and I have been a legal secretary for four decades, primarily working in downtown Detroit, and now working from my home. I graduated from Wayne State University with a degree in print journalism in 1978, though I’ve never worked in that field. I like to think this blog is the writer in me finally emerging!! Walking and writing have met and shaken hands and the creative juices are flowing once again in Walkin’, Writin’, Wit & Whimsy – hope you think so too. - Linda Schaub
View all posts by Linda Schaub →
This entry was posted in Uncategorized and tagged nature, Park, Rabbit, Squirrel, walk, walking. Bookmark the permalink.