I brought my A-game to today’s excursion. 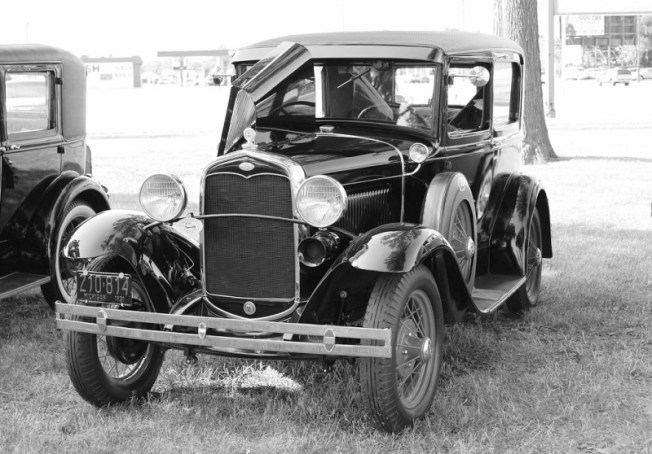 My morning agenda was to visit three parks, with the third being Youth Center Park here in the City.  It was also the site for an event entitled the “Model A Rendezvous” which was to commemorate the 90th anniversary of Henry Ford’s Model A vehicles.

First, I was at Bishop Park to walk the boardwalk and get some steps in, then stopped at Council Point Park for the sole purpose of seeking out Parker and giving him some peanuts, then I headed to the vintage car event … so, three parks by 9:45 a.m.

The long-awaited vintage vehicle event was originally scheduled for June 9th but cancelled due to rain.  Henry Ford’s Model A vehicles rolled off the assembly line between 1928 to 1932.  I wonder if there was as much fanfare back then as there was this past Wednesday when Ford Motor Company celebrated a milestone, as its ten millionth Mustang rolled off the assembly line at the Flat Rock Assembly Plant.  The paint job on this 2019 six-speed manual convertible, was the identical Wimbledon White as the first Mustang 64 years ago.  It was a big media event and Mustang automobiles from the last six decades gathered in the plant’s parking lot to form a 10,000,000 figure to commemorate the event.

I wanted to arrive early to beat the crowd to check out the cars and take some photos.  The weather was perfect, bright and sunny, though many of the vehicles were parked in the shade.  There were about fifteen Model A vehicles at this event when I arrived, but, as I was leaving a few more Model A cars and trucks were moseying into the event area.

I visited each of the vehicles on display. 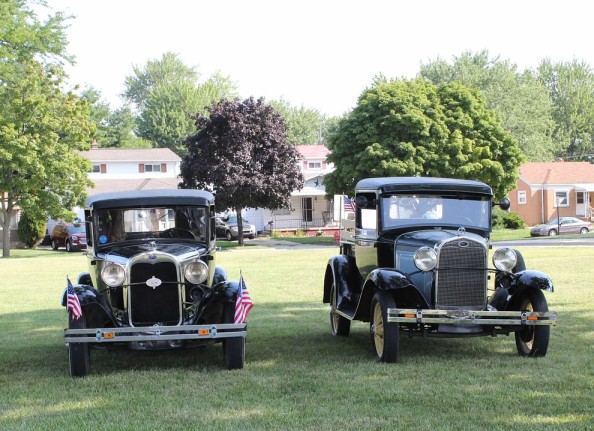 Many, if not all, were part of the Model A Restorers Club. 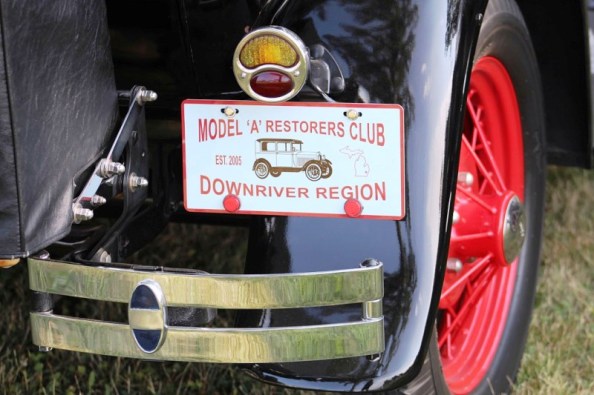 I paused the longest when I stopped to chat with two different owners of these fabulous vintage Model A vehicles, as they were kind enough to give me a history lesson, and let me check out the interior and exterior up close as they proudly showed off their vehicles.

The first person I spoke to was Greg, and he has owned this 1929 Model A car for five years. 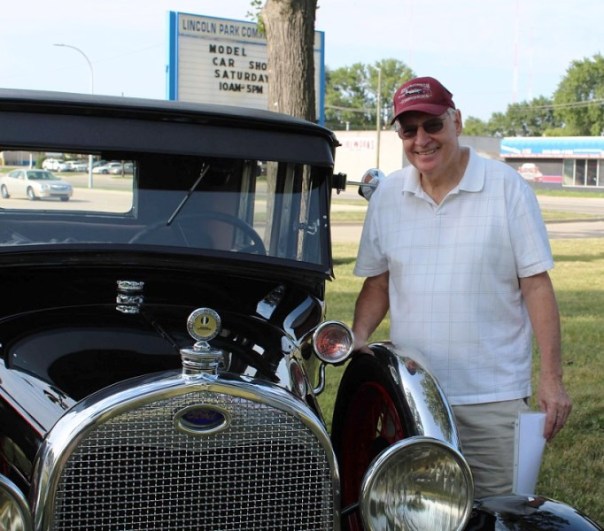 It was gleaming black and I could see my reflection in the glossy paint job.  I especially liked these snazzy wheels. 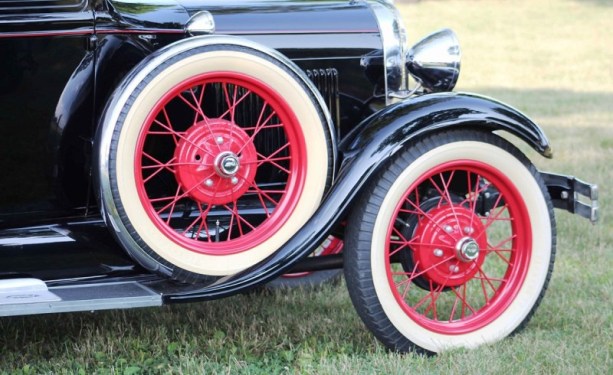 Greg showed me a few features for his car, including a specially made grille which helps protect the front of the car, and there were headlamps and small lights which he turned on, as well as tooting the horn, which sounded that tinny, high-pitched noise like you hear in the old movies. 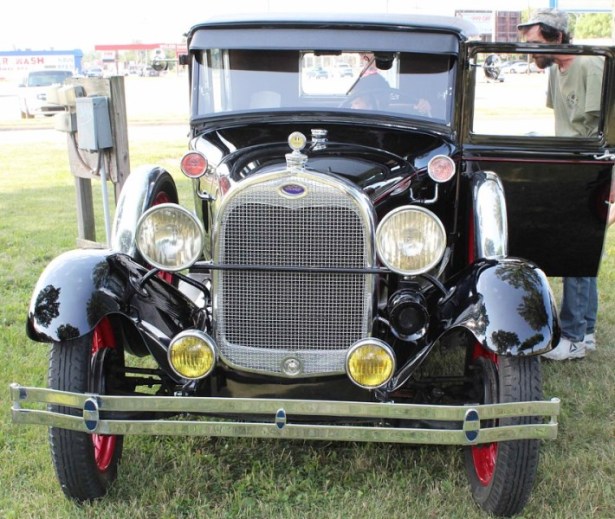 The front windshield was unique in that the glass tilted outward and Greg said it provides somewhat of a breeze on a hot day as the air will coming rushing in toward your feet when you’re clipping along.  As I was taking it all in, a youngster came by, saw the door open and asked if he could sit on the seat.  Greg accommodated him, saying “as long as you don’t drive the car away” … that got a few grins from the boy and a man standing nearby, most likely his father, who captured this “Kodak moment” on his cellphone as the little boy gripped the steering wheel and his face lit up with a big smile. 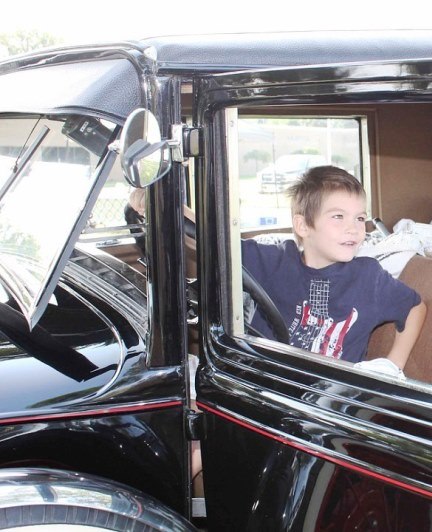 I was going to check out more of Greg’s car, but a small crowd had gathered after the youngster took the wheel, so I ventured to the next car over.

He told me the first outing in it with his wife, the passenger door opened on its own and Linda said that was the last time she’d ride with him.  Neither of these gentlemen brought their wives to today’s event, and coincidentally both wives are named “Linda”.

Lee bought the vehicle “as is” and it has not been restored in any way as long as he has owned it, thus the paint job is a little dull, but imagine this … that paint job is 87 years old!  The top of the car is actually sheet metal and you can see how it is bolted together.  There is a narrow gap on the passenger side.  I said “maybe that is why Linda nearly fell out.”  He smiled.

The hood was raised up so the engine was visible and Lee told me you can see gas and oil traveling through when it is turned on. 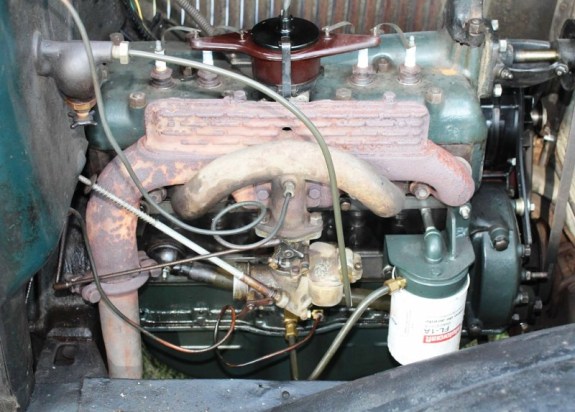 The pickup bed had a spare tire in it.  He showed me the tail lights, not part of the original equipment, but a necessity when traveling around in this vehicle – and he does travel around in it.  I asked if it is in a garage that is humidity controlled and he said it was not.  You can see the old Ford logo imprinted on the rear portion of the truck and his vanity plate as well. 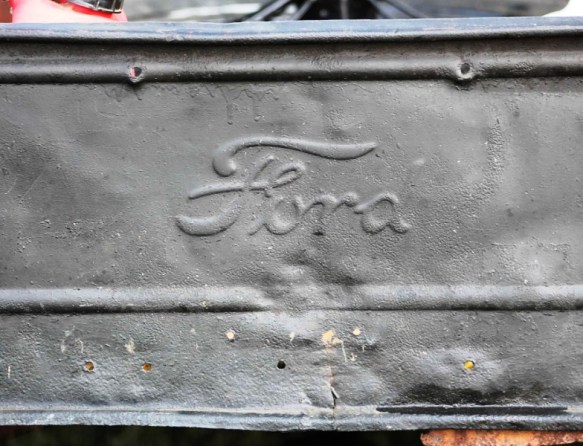 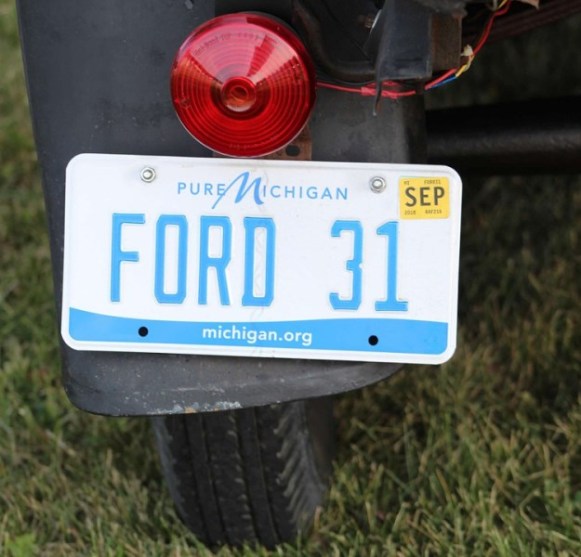 Next, Lee opened the door so I could inspect inside the car.  Right away I noticed a bright-red fire extinguisher on the passenger side, and remarked that with everything black or dark colored, the bright red fire extinguisher looked out of place.  He said you must have one since the gas tank is in the front of the car.  Good point!!

The seats seemed smaller and I said “you couldn’t have long legs and travel a distance in here.”  I noticed there were no seat belts, so I asked if it wasn’t necessary to “buckle up” per the law.  He told me that if a vehicle did not come with standard equipment like seat belts or turn signals, then the law does not require you to have them.  He did confess that he might get seat belts one day though.  Since there are no turn signals, he uses arm gestures just like motorcyclists or bicyclists use.

I was fascinated with the front dashboard and instrument panel cluster … well, there were not many doodads there, so it was not cluttered, that’s for sure.  I bent in closer to see the odometer and speedometer and Lee said he thought it had about 73,000 miles on it (that is, if it had not already rolled over before he got the car). 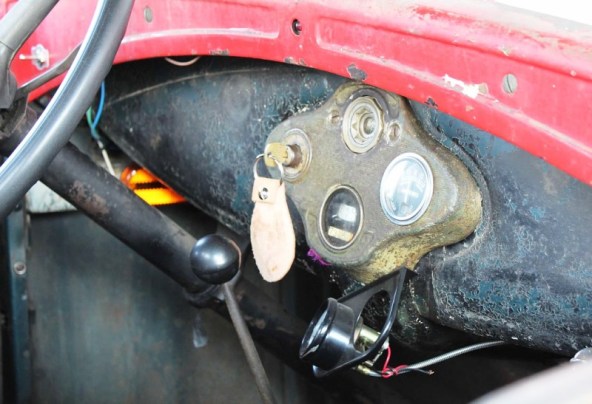 Next, he reached up and rapped on the inside part of the roof and said “notice how it is made of wood?  That is because the roof under the sheet metal is actually wood from a packing crate and up close on one of the boards, you can see the wood is stamped “Sears Roebuck & Company” on it.”

Lee plans to go to the vintage car event at The Henry Ford on September 8th and 9th and Greg told me I should check it out because you can find every type of old vehicle at that event and “you’d come home with even more pictures than you took today.”  So,  I checked it out and Greg is right – what a collection of vintage vehicles.  The link is here if you’d care to view it:  https://www.thehenryford.org/current-events/calendar/old-car-festival/

After I got home and uploaded these pictures I noticed Lee’s vintage Ford shirt he was wearing – how did I miss that while chatting with him?  I guess I was so engrossed in looking at the vehicles and learning their history, I didn’t notice.  Very cool Lee!

I took some photos of the other vehicles at this event, including close-ups of some of these features from cars of yesteryear.

Check out the rumble seat – maybe not your smoothest ride. 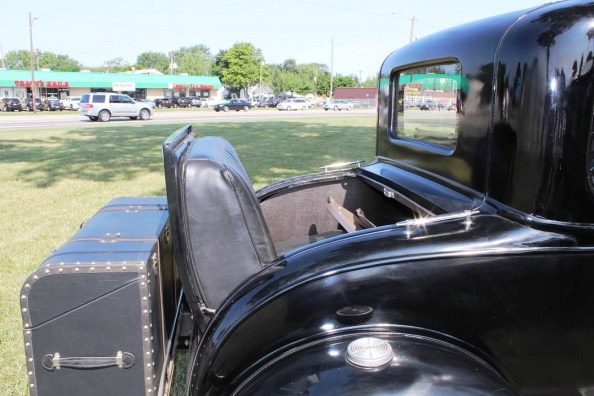 This is a produce truck with its scale. 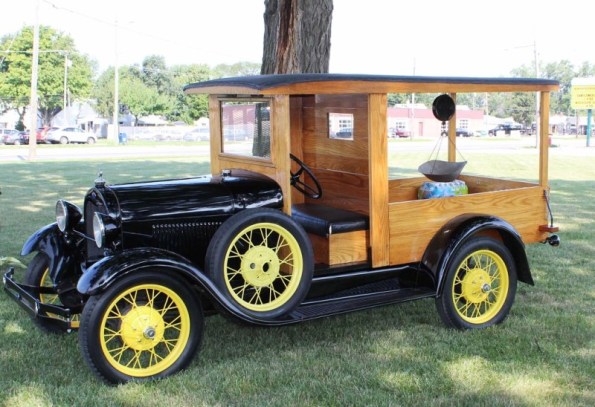 How about this delivery truck? 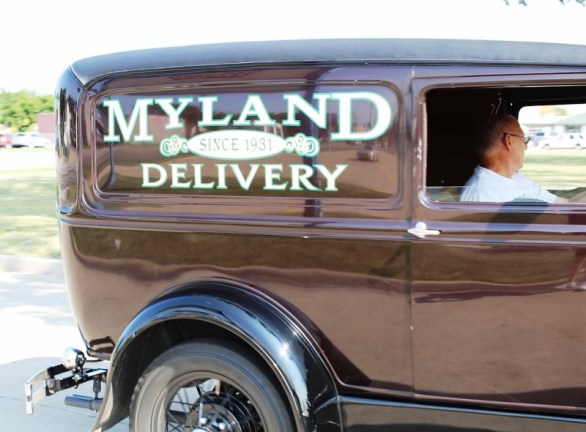 This vehicle featured a wooden box which was open to display its roadside emergency kit, which included a bicycle pump. 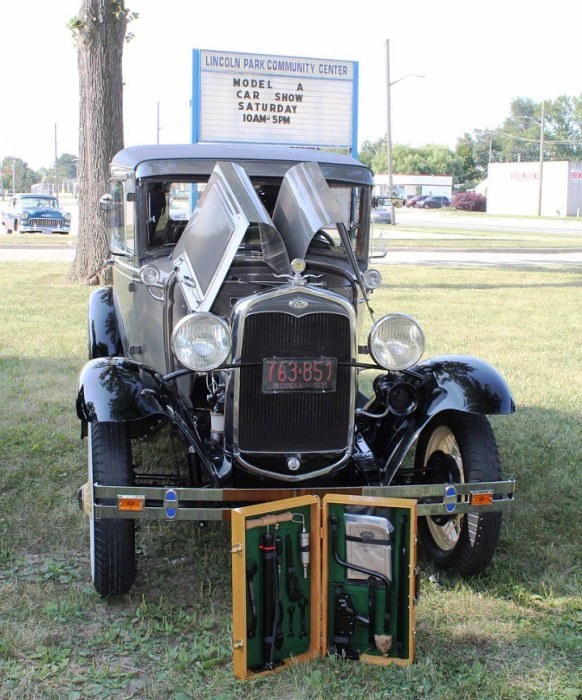 I also liked the fuzzy dice and a sign about “Henry’s Lady”. 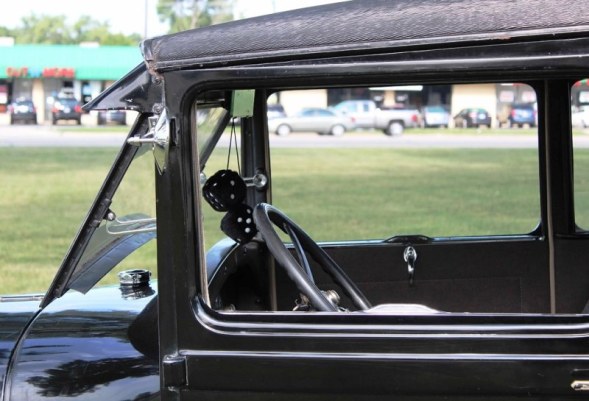 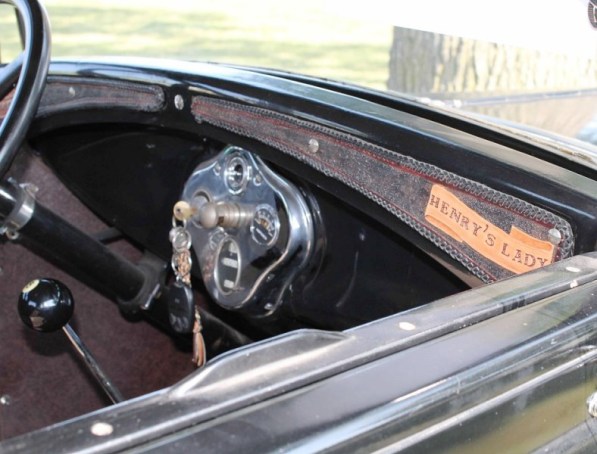 It was a fun event and I enjoyed myself.  As I headed home in my nine-year old car I glanced at the odometer with its whopping 5,254 miles on it.  I only got about four miles walked today, but it sure was fun to travel back in time. 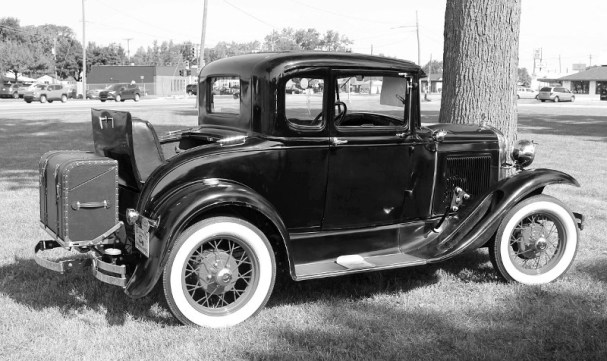 This is my first blog and I enjoy writing each and every post immensely. I started a walking regimen in 2011 and decided to create a blog as a means of memorializing the people, places and things I see on my daily walks. I have always enjoyed people watching, and so my blog is peppered with folks I meet, or reflections of characters I have known through the years. Often something piques my interest, or evokes a pleasant memory from my memory bank, so this becomes a “slice o’ life” blog post that day. I respect and appreciate nature and my interaction with Mother Nature’s gifts is also a common theme. Sometimes the most-ordinary items become fodder for points to ponder over and touch upon. My career has been in the legal field and I have been a legal secretary for four decades, primarily working in downtown Detroit, and now working from my home. I graduated from Wayne State University with a degree in print journalism in 1978, though I’ve never worked in that field. I like to think this blog is the writer in me finally emerging!! Walking and writing have met and shaken hands and the creative juices are flowing once again in Walkin’, Writin’, Wit & Whimsy – hope you think so too. - Linda Schaub
View all posts by Linda Schaub →
This entry was posted in Uncategorized and tagged Vintage automobiles, walk, walking. Bookmark the permalink.

38 Responses to I brought my A-game to today’s excursion.